Information Systems in the UK – a success story 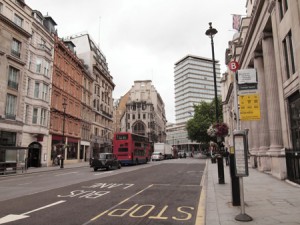 Public Transport Information Systems in the UK are successful especially because of the use of digital medium and Intelligent Transportation Systems. Not only have these expanded enormously in recent years, they have also been a forum for good experimentation.

Since the 1940s, the UK has had an extensive and largely comprehensive bus network in terms of area coverage, though frequency has generally been in continuous decline since the 1950s. The problem of very sparse bus services in rural areas was recognised as long ago as 1961 (Jack Committee report on ‘Rural Bus Services’). Prior to bus deregulation and privatisation in Great Britain outside London in 1986, provision of bus services was largely by Passenger Transport Executives (PTEs) in the largest cities, and by area operating companies of the state-owned National Bus Company (NBC) and / or municipally owned operators in other towns and cities with rural areas served by NBC companies or privately-owned operators. London was a case apart with nearly all bus services run by the publicly-owned London Transport, as was Northern Ireland.

So outside London (where there were good bus maps and, for the standard of the time, good at-stop information) bus services until 1986 were tended to be run by area-based and near-monopoly operators under a regulated system where changes to bus services happened relatively slowly. Many of these operators produced operator-wide or area booklets detailing their services. These weren’t necessarily a comprehensive guide to all bus services in an area but usually they gave a very extensive coverage. From about 1975 onwards (this process was speeded up by the Transport Act of 1978 which required local authorities to produce Public Transport Plans), some local authorities also began to get involved in public transport publicity, producing county-wide or area booklets in several cases.

The twin forces of deregulation and privatisation of the operating side of the bus industry from 1986 brought about a situation where, outside London and Northern Ireland, both operators and local authorities struggled to give up-to-date and comprehensible passenger information on bus services. The industry gradually became dominated by major operating groups such as Stagecoach, FirstGroup and Arriva, and various pressures then led to the establishment of the national Traveline public transport information service in 2000 which is discussed later in this article.

Rail services declined from after the 2nd World War, but there was a particular cutback in rural branch lines, and indeed some interurban routes, from 1963 with the publication of the ‘Beeching Report’. Later, the state-owned British Railways (BR) – effectively the sole rail operator outside London – was replaced in 1994 by a complex system of privately-owned but contracted rail operating companies operating within a looser ‘National Rail’ network. Despite earlier cutbacks, the rail system is still large and demand has been growing since the 1990s to the extent that some sections of the rail network have severe capacity problems.

Express coach services grew in Britain from the 1920s; and after deregulation in 1980 (and the virtual completion of Britain’s motorway network shortly after), the industry was dominated by National Express in England and Wales and by Citylink in Scotland. Following the yield-management and direct-selling opportunities afforded by the Internet, Stagecoach-owned Megabus and FirstGroup-owned Greyhound UK started and now compete with National Express on some key motorway-based corridors. There are also a few other firms on selected corridors, plus in the London area  – a number of express coach services aimed at commuters.

Ferry services are important for areas of western and northern Scotland, and for links to Ireland, the Isle of Man, the Scilly and Channel Isles and to mainland Europe. There are also a small number of ferries on coastal and cross-estuary services in some other parts of mainland Britain and on River Thames services in London.

Domestic air travel has also grown tremendously since 1995 when the first low-cost carriers started, although route coverage fluctuates significantly from year to year as the economic situation changes.

The nature of public transport networks in the UK is such that there are particular features of the UK’s public transport information systems. These are explained in the following sections. 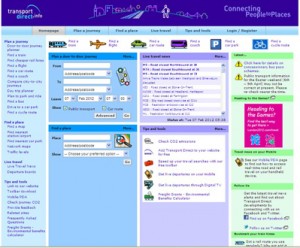 Traveline is a group of regional partnerships between local authorities and bus operators to provide impartial and comprehensive information about public transport, and was founded as a result of discussions initiated by the UK government in the late 1990s. These partnerships provide both a phone enquiry service and web-based services. Information about both express coach services and rail services is also given but these also have their own dedicated enquiry services – the rail one covers the entire industry while for express coach, each major operator has its own enquiry services.

Traveline started off primarily as a regionally-based, but nationally-co-ordinated, phone enquiry service with a common number (now 0871 200 22 33), but quickly evolved into publicly-available regional journey planners, now accessed at www.traveline.info. Rail and express coach data is also included in Traveline, and, in some regions, ferry services as well. It is essentially a journey planning service, enabling people to find out how to travel between two places in an area by bus and, if required, by rail and coach as well. Timetables for individual bus routes are also provided.

In the rail industry, partnership is also evident through the National Rail Enquiry Service (NRES) set up by ATOC (the Association of Train Operating Companies). ATOC emerged as a result of the way the rail industry was privatised in 1994, and the requirement to have a National Rail Enquiry Service was included in the rail privatisation legislation. NRES was originally only a phone enquiry service (and by 2003 was the busiest telephone number in Britain with 61.8 million calls) but has rapidly moved over to a point where web enquiries are much more important. In the financial year 2003/04, there were nearly 53 million phone enquiries to NRES and only 38 million website visits. In 2010/11 the respective figures were 9 million and 195 million (ORR – Office of Rail Regulation: ‘National Rail Enquiries up to and including 2010-11 Q4’).

National Public Transport Access Nodes (NaPTAN) database is a nationwide system for uniquely identifying all the points of access to public transport in the UK.

Every point in the UK where public transport can be accessed or left is allocated a unique NaPTAN identifier. These include railway stations, express coach stops, airports, ferry terminals, bus stops and taxi ranks, and also include places where public transport can be accessed but where there is no physical stop. The relationship of the stop to a city, town, village or other locality can be indicated through an association with elements of the National Public Transport Gazetteer (NPTG), a dataset containing details of every city, town, village and suburb in Great Britain.

TransXChange is a UK XML-based national data standard for the interchange of bus route and timetable information between stakeholders involved in the provision of public transport passenger information. These are principally the bus operators, local authorities, the Vehicle and Operator Services Agency (VOSA) – with whom bus services have to be registered – local authorities and passenger transport executives. TransXChange is accompanied by the TransXChange Publisher tool which renders a TransXChange document into a human readable format, matrix and route map.

NPTG, NaPTAN and TransXChange have been sponsored by the UK Department for Transport.  The XML schemes therein are part of a family of coherent transport-related XML standards that follow UK GovTalk guidelines.

Previous: Interview with :Jogesh Sachdeva, ‘Customers will love to wear our safety garments all the time’
Next: Public Transport Projects How to build the infrastructure facilities