“The requirements at this location were complex. In addition to the primary requirement of noise mitigation, visibility, aesthetics and maintenance were also of key importance. As always, one of the major factors towards barrier composition is the selection of the right materials. In general, the composition of the noise barrier for any particular location under study will depend on the Acoustic design requirements determined on the terrain. Different terrains and locations could require different solutions,” says a company official.

Acoustic mapping & Acoustic design is a mandatory pre-requisite towards any successful noise solution. Noise has very peculiar characteristics and hence, noise propagation is complex. At different locations, noise can propagate differently. Most importantly, noise isolation is of primary importance and unless this is done, abatement results will be generic in nature and will not yield desired results. It is this complexity that makes noise solutions unique for different locations. Needless to say, successful noise mitigation is wholly dependent on proper noise engineering.

Elaborate progress has been made in this field and Europe (mainly Italy) has been in the forefront in this area, resulting in the formulation of the European Standards EN 1793 & EN 1794.

The European standard EN 1793 refers to performance characteristics of the barrier and is composed of three parts: Part 1 – sound absorption, Part 2 – Airborne sound insulation, Part 3 – Normalised traffic noise spectrum. Standard EN 1794, on the other hand, refers to the physical characteristics of the material and is composed of two parts, Part 1- Mechanical performance and stability requirements, Part 2- General safety and environmental requirements. These two standards ensure overall product compliance, in terms of physical compatibility as also of performance compatibility.

In compliance with the standards, the acoustic barriers are classified according to various factors, amongst which the main ones are the sound deadening, the sound proofing and the insertion loss IL of the barrier. Sound deadening and sound proofing being the intrinsic characteristics of noise barriers which indirectly and feasibly affect the overall performance of the barrier, the insertion loss is the factor that relates to the real difference between the noise level at the source and the noise level behind the barrier. It may be stated that insertion loss IL represents the reduction of noise. The design is thus developed, in order to obtain maximum value of IL.

The Fracasso Group, founded in the 1940s, is headquartered at Fiesso d’ Artico near Venice, Italy. A leading manufacturer of noise barriers, metal crash barriers (Guard Rails), pedestrian barriers, ornamental barriers, bridge parapets, scaffoldings, etc, the Group has worldwide facilities in many countries including India, Croatia, Greece and Germany. The Indian subsidiary, with its head office in Mumbai, was incorporated in 2002 and the manufacturing facility is located at Murbad. The noise barriers manufactured by the company are composed of certified panels which form part of mixed, opaque and mixed solutions and conform to the European Standards, EN-1793 & EN 1794. 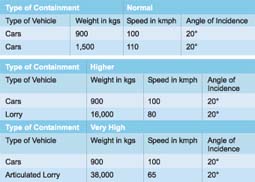 Fracasso is the only manufacturer of tested barriers in India conforming to the European standards EN 1317-1 & 2. These barriers are crash tested at select independent laboratories before installation and cover a range of vehicles from cars to trailer trucks.

There are two types of barriers for the above applications: 2n Barrier and 3n barrier. The 2n Barrier system has a double wave rail where the degree of danger and speed limitations is low (Urban areas, Streets with speed limits, etc). The 3n Barrier system, on the other hand, has a triple wave rail obtained after thorough testing and careful planning, suitable for critical and highly dangerous situations. This sophisticated system permits greater retaining potential of heavy vehicles like buses and trucks, and its lower end is not too high for passenger cars. The system also incorporates a technological space element for absorption of the kinetic energy of the passing vehicles to attenuate the deceleration of the vehicle crashing into the guardrail. The release element in the system permits the rail beam to maintain its original height even when the crash energy potentials are greater than expected.

In India, apart from noise barriers, the company also manufactures crash barriers which have been installed at many locations all over India including the much acclaimed Bandra Worli Sea Link at Mumbai. Barriers installed in India conform to the Indian specifications as laid down by the Ministry of Road Transport and Highways. Although India is the primary market, Fracasso manufactures and exports crash barriers to many countries including the Middle East, South Asia and Africa according to the standards and specifications prevalent in those countries.

“We are in the process of bringing the crash tested barriers into India, due to the enormous safety aspects that they offer, considering the developments that have been made in this area. Tested barriers are specifically crash tested in European laboratories and this will be the first time that they will be brought to India. India is developing world class roads and it is only just that such roads be complemented by such world class safety furniture. We also propose to introduce corrugated steel culverts in road construction as an alternative to concrete culverts as these culverts can be installed very fast and cut down project times substantially,” adds the company source.

With major focus on infrastructure in India, the Group believes that while world class roads are being built in India, it is only a matter of time before world class amenities follow.