PPP in Highways: Can they be the road to success?

With the growing need for expanding and maintaining highways, the role of private sector in the highway projects has been gaining momentum since the last few years. A large part of highway network has to be developed by public-private partnerships and several high traffic stretches have already been awarded to private companies on a BOT (Build, Operate and Transfer) model. All contracts, whether they are for construction or BOT, are awarded by the National Highway Authority of India (NHAI), the apex government body for implementing the National Highways Development Plan (NHDP) through competitive bidding to private sector, thus paving way for public private partnership in highway projects. Indian highways serve about 61% of freight and 85% of passenger traffic on a 3.3 million kilometre road network. Under the BOT-toll system, the contractor recovers his investment through toll collection while in BOT-annuity projects, the developer takes payments in instalments from the government.

The government of India has allowed 100% FDI under the automatic route in all road development projects. It has also given 100% income tax exemption for a period of 10 years for the private highway developers. Furthermore, the Cabinet Committee on Economic Affairs (CCEA) has agreed for the National Highways Fee (Determination of Rates and Collection) Rules, 2008 to establish uniformity in fee rate for public funded and private investment projects. The government is also enabling cheaper loans for highway projects that will speed up the projects worth more than US$ 12.70 billion under separate phases of the NHDP. The Ministry of Road Transport and Highways is considering a green corridor (project solely for farmers with no toll charges) that would link rural roads with National Highways. 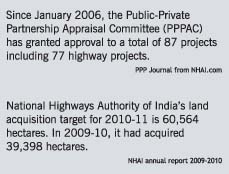 The projects to be awarded on the basis of BOT need to be value proposition for the government as well as the private players. However, certain key enablers such as “generation and sources of funds” in this respect are of prime importance. In May 2010, NHAI stated that it needed to borrow up to र20,000cr per year for the next 15 years to implement र9 lakh crore worth of road projects in the PPP mode till 2031-32. NHAI has a target of building 20km road every day. This had placed a huge financial strain on the government as the award process for construction of 36,000km of roads is to be completed in the next three years. The central road cess and tax exemption bonds were the main sources of funding for the government’s portion in the highways project till now. However, the government has been depending on a number of other sources like market borrowings, FDI and additional toll revenue to finance the 7-phase NHDP programme too. But PPP now is set to make things easy.

The risk involved and the problems

The basic risk in these projects from the concessioning authority’s perspective is the risk of contractor using low class material, delayed completion of projects, toll leakages, unfair practices, etc. These issued can be managed by proper transparency in the system and appropriate contract management. Some of the risks perceived from the concessionaire’s point of view are cancellation of contracts, deferred payments, delayed approvals, problems of land acquisition and problems of planning or execution.

Small companies become big: Though no data is available on investments from abroad, the international private equity firms are channelling foreign investment into the 30% equity component of the project cost. Even the foreign infrastructure companies which come as junior partners in the projects are later expected to adopt the role of senior partners in projects of over `5,000 crore, before taking up road projects independently.

Delays in the projects is another issue to be kept in mind: These projects often miss their deadlines. Majority of the 17 road works awarded under the public private partnership as part of Phase-I of National Highways Development Programme (NHDP) were delayed. According to a recent report by Comptroller and Auditor General of India on roads, of the 17 projects, only five were completed in time while there were delays of 2 to 42 months in the case of others. The report also refers to issues like absence/ inadequacies of detailed project reports or insufficient penalty provisions in the contracts for some of the roads and highway projects under the PPP programme. The report, which studied four projects constructed under the build-operate-transfer (BOT)-toll and an equal number of projects executed under BOT-annuity basis, has been tabled in Parliament. Toll collection started late in all the four projects reviewed under the BOT-annuity basis resulting in a revenue loss of र23.89 crore. The report states that NHAI did not align base toll rates with the latest wholesale price index at the time of sending draft toll notification to the government.

Performance and viability of the projects: This is another issue that plays a crucial role in the PPP model. Both have been found to be unstable. So far as PPP projects are concerned, lack of capacity and relevant skills as well as the prevailing mindset have been responsible for the dismal performance. Pursuant to a Cabinet decision two years ago, a separate PPP division with the requisite skills for structuring and delivering PPP projects needs to be created.

Over-engineering and unsustainable costs: Another issue from the public’s perspective is that of over-engineering which leads to unsustainable costs. Several expensive elements have been added over the years to the project design. As a result, the estimated costs of six-lane projects have been doubled in the last few years from र6cr pkm to र12cr pkm. This includes the introduction of mini-flyovers every four kilometres to enable bullock carts, camels and elephants to pass under the highway. If such expensive structures are to be built, then either the users will have to pay higher toll rates or the taxpayers will have to bear the additional burden. The real problem with over-engineering is that it prevents an optimum use of scarce resources, as a few roads get over-engineered at the expense of the network as a whole.

Land acquisition targets is another matter that cannot be ignored: Road builders are of the view that land acquisition should be done systematically and the success should not be in terms of the area acquired. There have been instances where a major portion of the land was acquired but patches were left in between which delayed the entire project. NHAI had opened 150 special land acquisition cells in several states, headed by an additional district magistrate (ADM) or sub-divisional magistrate (SDM), to liaise with NHAI through project directors. It had also reduced the time taken for the land acquisition process from 24 months to 11 months. However, the issue primarily relates to appropriate compensation and rehabilitation strategy that is often found to be wanting.

Proper control mechanisms are lacking in our system. Since PPP is relatively a new concept, it will take time to settle but if these issues are not taken care of, then this mechanism would be just like previous systems which yielded sub optimal results. The following control mechanism techniques could be adopted to remove the flaws in the system:

Previous: Virginia Smart Road can create rains
Next: ITS, Busan Taking a ride in a driveless train