TransCAD is the first and only Geographic Information System (GIS) designed specifically for use by transportation professionals to store, display, manage, and analyse the transportation data. It was used in this TDM too. 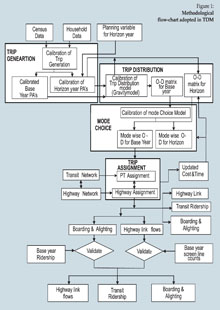 Trip Generation: The data collected by household survey and from Census of India were taken as input in this stage and trip end models were developed for the entire study area using Multiple Regression technique for all types of trips made by the residents of the study area on the basis of number of trips produced/attracted, total population, service employment, basic employment, total employment, student population, vehicle ownership, population of age under five years, average income, etc.

Trip Distribution: For modelling the trips, a gravity trip distribution model was adopted. The integrated transport network geographic file created as explained earlier was used, activating only the links pertaining to the base year. All the possible centroid connectors were included in transport network. Travel time skim obtained from traffic assignment, i.e. after the interaction between transit and traffic assignment, were used as impedance matrix. Gravity model is proposed to forecast future travel patterns of the study area. Before applying the Gravity model, it is necessary to calibrate model to reproduce the base year travel patterns.

Trip Assignment: Trip assignment models were used to determine the route to be travelled and to assign inter-zonal flows to the selected routes. Trip assignment was done in two 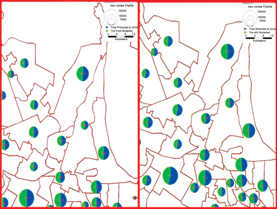 parts: Transit Assignment and Traffic Assignment. The O-D matrices generated from different sources were combined to get the public transport (PT) and highway O-D matrices. Public transport O-D matrix contains all person trips made by residents and non-residents by the PT modes, viz. walk, bus, metro and IPT. Majority of people use IPT as access and egress mode to metro and bus. Therefore, the inclusion of IPT in PT assignment has enabled modelling of access trips to bus stops and metro stations. The highway O-D matrix consists of person trips made by residents and non-residents by car and two-wheelers.

Public Transit (PT) assignment was carried out to assess the number of passengers that use links and routes in a transit network as a function of transit level of service and fare. This assignment needs an O-D matrix of passengers demand and a transit network, and produces link level and aggregate ridership details. The method chosen, SUE (Stochastic User Equilibrium), produces assignment results that appear to be the most reasonable. In this method, the users have only limited information about the network and their transportation options (mode and route) for going from origin to destination.

The traffic assignment deals with the supply side of transport demand modelling. Traffic assignment was carried out for peak hour, after pre-loading the transport network with peak hour PT and commercial vehicle flows. The daily PT matrix was weighed by the average peak hour flow to daily flow ratio of 0.13 to obtain the peak hour PT matrix and PT assignment was carried out. After PT assignment, these flows were converted in to PCU by using average passenger – PCU ratio. These peak-hour PT flows and commercial vehicle flows were pre- loaded on to the transport network. The passenger O-D matrices of car and two-wheeler were converted into peak hour PCU units. Traffic assignment model has been used to estimate the flow of traffic on a road network. Input data required for traffic assignment is zonal map, road link and node layer O-D matrices. Networks are used to analyse the way people and goods flow from one location to another. The information contained in, and derived from, networks is critical for many different applications, including routing and scheduling, mode choice modelling and traffic assignment models. Networks are extremely efficient and compact data files that hold essential information for analysis in a format required by the models. Network data structures are optimised for efficient storage and rapid processing of network algorithms such as finding the shortest path or performing a traffic assignment.