Integrated Command and Control Centre for Traffic Management in Raipur 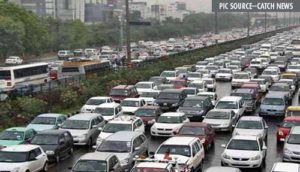 The Chhattisgarh government has set up a hi-tech integrated command and control centre in Raipur for better Traffic Management and Surveillance in the city. Set up at a cost of Rs 157.70Cr as part of the Raipur Smart City initiative, the project will take care of safety & security, traffic management, public communication, and also to keep the city environment green.

Under the project, around 372 CCTV cameras have been installed at strategic locations for better surveillance, Intelligent (automated) traffic signals have also been put up at 40 locations, besides 36 automatic number plate recognition cameras at six locations and red-light violation detection devices at 23 locations. Devices for speed violation and wrong way movement detection have also been put up at some places to ensure strict compliance of traffic rules. Aiming to ensure safety and prevent crimes against women, emergency call boxes have also been installed at 83 places in the city where people can seek help at the time of an emergency by just pressing a button.

The project will be operated jointly by transport, police departments and the city civic body. The system has been designed, constructed and implemented by the Smart World and Communication (SWC) business unit of Larson and Toubro Construction.