My recent experience at Hong Kong provoked a deeper thought on the sustainability of transit systems and the need for integration of land-use planning and Transport systems.

Planning visions of transit and land-use integration are important, but adequate funding is needed for successful execution. An important lesson from international experience is that transit and land-use integration can yield the income needed to expedite and support the process. Experiences in cities like Hong Kong show that “value capture” – an infrastructure financing concept that seeks to capture land value created by new infrastructure, particularly transit – is effective not only for sustainable finance but also for sustainable urbanism.

Value capture is particularly well suited for financing transit infrastructure in dense, congested settings, where a high premium is placed on accessibility and the institutional capacity exists to administer the program. Accessibility benefits, which get capitalized into land values, present enormous opportunities for recapturing some of the value created by transit investment, at least as a supplement to fare-box income and other traditional revenue sources.

Even in urban-dense, transit friendly Hong Kong, rail investments are not financially viable on their own: The Hong Kong Mass Transit Railway (MTR) meets the investors’ demands for return on equity only as a result of its property development.

Even in urban-dense, transit friendly Hong Kong, rail investments are not financially viable on their own: The Hong Kong Mass Transit Railway (MTR) meets the investors’ demands for return on equity only as a result of its property development. Value capture and joint development not only generate income to help retire rail-capital, investment bonds and finance operations, they also create a market demand that ensures high-ridership services.

Hong Kong’s version of a public-private partnership is not about off-loading the cost of building railways to the private sector. Rather, it is about “co-development” – development in which each sector brings its natural advantage to the table (for example, land acquisition powers from the public sector, access to equity capital from the private sector). The resulting “win-win” situation leads to financially viable investments and forges a close connection between rail systems and nearby real estate development that attracts tenants, investors and transit riders. Both rail + property development has created a virtuous cycle of viable railway operations and highly transit-oriented built forms.

Important to capturing transit value has been government-level (institutional) adaptation and change. Hong Kong gained an appreciation over time – of the importance of urban design, pedestrian circulation, and public amenities; all of which are particularly important in dense, crowded cities. To its credit, MTR made a conscious decision to build high quality, mixed use rail + property projects on greenfields en route to the new international airport as well as on brownfields served by central-city railway extensions – like the ocean park.

Transit in developing countries such as India has been guided primarily by the almost singular objective of enhancing mobility (that is, the ease and speed of moving about cities). Motivated by the need to see results while current city leaders (political party) are still in power, city municipalities and transit agencies often adopt a short-term and narrow-focused approach. For example, the approach on rapidly relieving congestion. In this process, the long term vision of promoting sustainable patterns of urban growth is often lost. The mindset is reflected in the absence of strategies, and regulations to create high densities along transit corridors and high-quality urban spaces. Both can be vital to increasing transit and nonmotorized transit use, thus reducing private car travel.

In Indian urban areas like Ahmedabad or Mumbai, the FAR (FSI) of urban areas is kept low (1:00 to 2.5) for the entire urban area (including near BRT / metro stations). As against this, the transit oriented cities like Hong Kong or Tokyo adopt much wider variations with the central business district areas alone — the ratio ranging from 1:00 to 12:00 in Hong Kong – allowing high density construction around transit lines and stations.

A point emphasized throughout is the importance of developing vision of urban futures. It is also imperative that there be a financial model to sustain the transit oriented development. Financial sustainability can take the form of value captures, a tool for generating revenue – funds that go to pay for not only the stations, tracks and vehicles but also for the upgrades and enhancements that are needed within a half-kilometer / five-minute walk from the station to create a high quality environment for living, working, playing, learning, shopping and interacting.

About the Author: Dhwani, an architect with Masters in Urban Management from Domus -Italy and University of Wales, has worked on several prestigious urban projects such as GFH’s Mega City, Reliance’s NM-SEZ, SREI’s townships and International projects with AS, Paris. She has taught in various institutes such as JJ school of Architecture Mumbai, JD Birla Kolkata, Ilead Kolkata and Thadomal Mumbai. She currently leads the Design Advisory and Management for a large international consultancy firm. 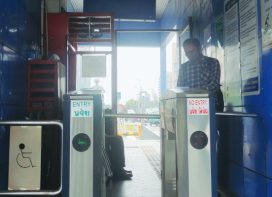