Traffic Enforcement: In many cases, traffic congestion is caused by illegal or irresponsible road use, such as illegal parking and use of bus lanes. With traffic enforcement video solutions such as wrong-way driving detection, illegal U-turns and illegal parking detection, these kinds of incidents can be identified in real time, allowing operators in traffic control centres to alert the authorities immediately. This makes it faster to react to incidences of illegal or irresponsible driving and remove obstacles on urban roads, while also holding drivers accountable.

Dhakan added, “Intelligent Traffic Cameras and ITS (Intelligent Traffic System) have a good potential in the Indian market. The intelligent transportation system market is expected to grow from US$ 23 billion in 2018 to US$ 34 billion by 2025, according to a 2019 Global Market Insights, Inc. report. Roadways held a majority share of the intelligent transportation system (ITS) market due to the extensive amount of consistent traffic movement on roadways demanding innovative traffic management methodologies. An exponential rise in the number of road accidents around the world is a growing concern for government agencies.

“Although all Intelligent Traffic Systems have certain existing hardware components, they are far from being “smart” enough to provide any advanced management functions. Traditional cameras can monitor traffic flow; however, they are unable to differentiate other variables such as vehicle types, cyclists, and pedestrians.

“An Intelligent Traffic Management system requires multiple technology layers and municipal governments often lack the expertise in identifying and selecting the right mix of solutions. Although some companies do offer a vertically-integrated offering, newer players are still in the stage of technology development instead of system integration.”

Technological challenges aside, there are also inherent challenges in changing a city’s infrastructure. As traffic management is a safety critical system, regulatory policy and reliability testing requirements can impede the deployment of new technologies. Municipal Corporations and Governments have a limited budget for major radical infrastructure upgrades and are also more conservative than the private sector, with city officials often more resistant to change and adopting new technologies. Finally, government procurement procedures often require application cases.

India’s Smart Cities Mission has increased the awareness of camera technologies and automated enforcement. While many cities are up to date and well versed on the benefits of smart city technology, others are new to the concept and not as well-versed in the technologies of camera enforcement.

Traffic management is one of the biggest infrastructural hurdles faced by developing and developed countries alike. As more vehicles hit the roads every day, extreme traffic congestion is bound to set in. Not only does it cause traveling delays, it also contributes to environmental pollution, aggravating health hazards and loss of human lives due to failure in transporting the accident victims, critical patients, medical equipment and medicines on time.

Vehant Technologies offers an array of products and variants in ITMS, which are on the cutting edge of traffic management systems and are committed to make traffic enforcement easy, efficient and effective.

A more progressive and efficient solution is being rendered by Artificial Intelligence and Deep Learning based system which make a promising platform for an Intelligent Traffic Management System”, said, Jatin Behal, Assistant Manager – Marketing, Vehant Technologies, 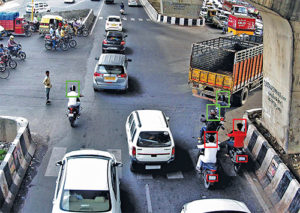