Prior to the bus system reform, buses were unable to compete with other modes of transportation. In 2002, the bus reform plans came underway. The objectives of the reform were to redesign the provision of bus transport services within the Seoul Metropolitan area in light of environmental concerns, increased satisfaction of passengers’ needs and achieving the industry financial sustainability.

The determinants of change can be divided into two perspectives: external and internal. The external factors are related to socioeconomic and political aspects. The Internal factors, on the other hand, are associated with the lack of standards and inefficient operators. Addressing these factors was crucial for the viability of the bus system.

Main Targets of the Bus Reform 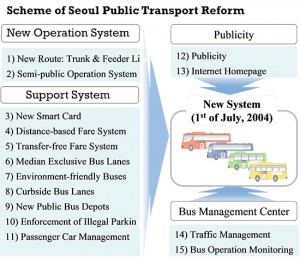 Seoul’s bus renovation project was planned in response to consumers’ needs and expectations in terms of urban mobility, rapid urbanization of the metropolitan area, and environmental concerns. The key to solving traffic congestion and maintaining a sustainable transportation system is simultaneously improving public transportation and restricting use of private passenger cars. The aim of Seoul’s bus renovation project is to revitalize the bus system through improving regulation and operation of bus services. Reform introduced new forms of governance in the bus transport industry. Additionally, the reform also introduced new monitoring methods, reorganized route networks, created median lanes, improved the quality of business, and introduced a new incentives framework for bus drivers and operators. To achieve this aim, several projects were prepared and implemented. All these projects were integrated and implemented as packages of projects in order to effectively address the complex issues faced by the bus transport industry in Seoul. They are discussed at following sections.

The reform is the result of a participative approach based on a consensus building process involving Seoul Metropolitan Government, bus operators, transport and city professionals, and the citizens, using ICT-based data mining and analysis technology. 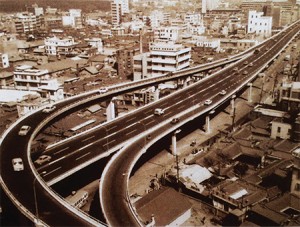 The new system unified and coordinated the fare structure to integrate both bus and rail services. The previous fare system resulted in shorter distance bus riders paying more because buses charged a single fare. The new fare system varies by mode of transportation and total distance traveled. For passengers transferring out of Seoul, the fare is charged based only on the total distance traveled and not on the transportation mode used. Within Seoul, the single fare for bus service start at 800 Korean Won for the first 10km and increases by 100 Korean Won for increments of 5km. The base fare also includes free-transfer up to four times applicable to both bus and subway. Users have an option of paying with their smart card or with cash, but cash paying users do not have free-transfer privileges and must also pay a surcharge of 100 won regardless of transportation mode.

The distance-based fare system replaced the flat-fare system, including free transfer within 30 minutes. The effectiveness of free transfers between buses and subway modes substantially increased bus ridership. Table below shows a comparison of fare structure and fare level before and after the reform. The introduction of the smart card eased payment methods and also attracted users by its multiple benefits. Transportation expenses generally decreased because of reduced costs for each trip ($0.674$0.632) and popularization of ‘subway monthly commuting ticket.’ The new fare system made large contributions to increase services and ridership.