A new smart card was introduced to facilitate intermodal ridership. The new smart card system is a stored-value smart card (T-Money), that was developed with many purposes in mind. Smart cards have had advantages for both passengers and bus companies. Passengers can use their smart card on bus and rail travel, get transfer-fare discounts, and choose between pre-paid and credit card-linked options. For bus companies, fare revenue can be accounted more accurately with the new smart card system. Seoul has been one of the first cities to use a Radio Frequency Identification card system (Mifare card from Philips) for fare collection since 1997. Though, after six years of implementation, the limited capacity of memory, transaction speed and security problems weakened the system. Thus, a new card system using an IC (Integrated Circuit) chip was developed.

The new smart card satisfies international standards, has increased capacity by adopting EMV (Europay, Mastercard, Visa, the global standard that is helping ensure smart cards, terminals and other systems can interoperate) which allows it to provide multi-function, supports scientific management of bus scheduling, and increases transparent management of bus fare revenues. The smart card is also planned to extend services to taxi use and high street shopping. 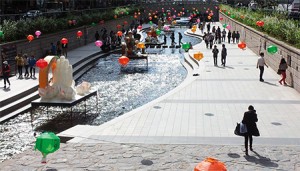 This integrated the Transport Operation and Information Service (TOPIS) which provides data on traffic information that can be uploaded to various transportation agencies in the metropolitan areas. This combined ITS (Intelligent Transport System) and GPS (Global Positioning System) technology to assess buses’ position, and control scheduling, and provides bus information to passenger via internet, mobile phone, and PDA. Such information also supports research and assists in decision making processes.

Seoul City Hall plaza was opened in May 2004. The area which used to be always jammed by traffic, exhaust, and noises was returned to the citizens transformed into a big town square park with a large grass lawn. It has defiantly succeeded in restraining the traffic flow in this area and securing space for pedestrians.