Shyam Khandekar, Chairman, BDP India and BDP Khandekar Netherlands, talks about the need to integrate urban transport infrastructure with urban design and landscape to make the cities livable and sustainable. Many cities around the world get their quality because of the design match between the private buildings and the public infrastructure.

Since time immemorial, accessibility has been a precondition to urban settlements and growth. Urban centres almost across the world either developed at cross-roads or along rivers where they could be reached by their inhabitants. 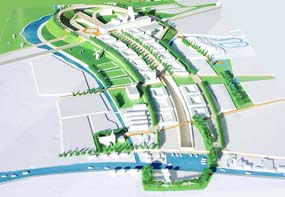 New modes of transport have given fresh impulses to urban growth. With the advent of the rail network, railway junctions gave fresh impulse to urban growth. The national urban networks have not only improved the accessibility of many cities better, but have also provided important precondition for their growth and prosperity. Cities which have missed being ‘well-connected’ have often lost out too!

But what is true of whole cities is true of city parts too! Areas which are well-connected, and where the infrastructure and city design are well matched, have a greater potential not only to grow and prosper but also to provide a livable, and more sustainable city in the long term.

As most Indian cities go through the convulsions of growth fuelled by economic prosperity, one can notice a mismatch between the urban (traffic) infrastructure and the built functions (buildings). Delhi and Mumbai are good examples.

While ideally the (often government initiated) urban infrastructure should precede the private development of urban land, very often the situation is exactly the opposite. The examples of metro lines being built in the centre of existing roads in Delhi and Mumbai, and the havoc that is causes to the city dwellers is a case in point!

to the city dwellers is a case in point!

But the fact that the infrastructure is often built up later than the building development on private precincts has another grave consequence which affects the long-term quality of cities. Most urban centres around the world which are a joy to live and work in, get their quality due to the design match between the private buildings and the public infrastructure. It is the interaction between the buildings and the streets which defines the experience of urban life! And the better this interaction is, the more livable (and often walkable) the city is. But since in most Indian cities the private development of building precincts precedes the public development of roads, streets and pavements (the public realm), the private developer of the buildings rarely sees the public-realm as an asset (also never being sure of not only when, but sometimes if, it will ever be built). Consequently, most private developments turn their back on the public-realm, creating introvert islands of development where the “paradise” is built within their complex and not in relationship to the public realm. As a result, the urban quality suffers!

That this process can be done in a better way leading to an integrated infrastructure+urban design+landscape is shown by the example of our project Belvedere Oude Rijn in the Netherlands. Not only have the design issues been solved in an integrated way, but the funding of the infrastructure also has been done by the urban development. 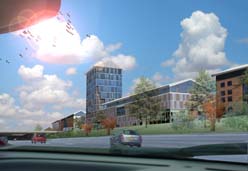 The way this was done was as follows. The Ministry of Traffic and Public Works, responsible for broadening this part of the National Highway 4 between Amsterdam and the Hague, reached an agreement with the two municipal corporations whose land abutted the National Highway, that they would get development rights to a certain amount of urban development along the renewed Highway. But they, in turn, would have to pay the Ministry of Traffic and Public Works a certain amount which would be used to build the renewed infrastructure. The two municipal corporations Leiden and Zoeterwoude, in turn, sold these development rights to private builders/developers. Effectively therefore, the traffic infrastructure will be financed by the development of urban functions by private parties.

The city councils of Leiden and Zoeterwoude commissioned a development framework for the area between the two cities, resulting in the project Belvedere Oude Rijn. The route of National Highway 4 in this area is slightly curved and in the future, will have a level difference of 18m where the scheme is anticipated. An integrated design was proposed embracing the transition between the landscaped as well as the urban areas, and at the same time giving form to the traffic areas. Above all, the design enabled space for the new railway station and a large car park. 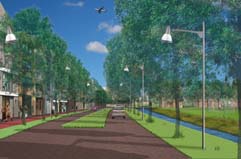 Belvedere forms a basis for a landscaped layout for the infrastructure whilst at the same time providing views overlooking the landscape. Due to this integrated approach in the design, existing potential problems (like noise pollution) are solved in one stroke. Through the structuring of earthen dykes along the highway, the downward slope of the highway levels is accentuated in the direction of the planned new aqueduct along the Old Rhine. This is also emphasised by the buildings which follow the contours, becoming higher as the highway ascends. In 2004, the Council of Zoeterwoude commissioned BDPKhandekar to develop the South side of the design further, resulting in Verde Vista Meerburg. In the developed design, new buildings are placed along the highway with offices facing the side of the highway and the residences facing the open green area. The parking for these new buildings lies hidden from view by the dyke walls, under the built-up areas. The offices placed along the highway function as sound barriers for the housing behind.

Such an integrated way of thinking could be very useful for the development phase Indian cities are presently going through.