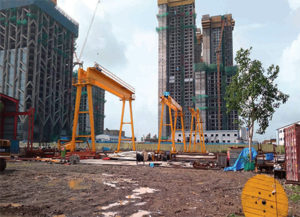 There are not many buses too in that area…

Agree. Taxi is the only way. So, with these corridors coming up, this area too will get connected by Metro. So if you have at least three stations in the area, people can walk for the remaining area. London has 600km of Metro network out of which 400km is underground. Greater Tokyo, more populated than Mumbai, has almost 893km of Metro network and 90 percent of its people travel by Metro. Even with a population close to 3 crore, you do not see many vehicles and buses on Tokyo’s roads.

Yes, but their services are good.

So that is why we need complete connectivity for people to move to public transport. Another problem is that every year there is almost a 10 percent increase in vehicle population of Mumbai. With those kinds of vehicles, where is the place to park? Parking is a major problem.

Is parking a major challenge for providing infrastructure in Mumbai?

Parking is a challenge because we don’t have adequate public transport. Many cities in the world have taken control of parking because when you control parking, people tend to switch over to public transport. In London, they have a Congestion Charge at the very core of London City. They are able to do it because they have a strong public transport system. Singapore too has done that, but then, if you have a Congestion Charge, then you have to provide an alternative transport also. It is not easy to do that in Mumbai not because people will not pay, but because there is no alternative. Money making is not the intention behind congestion charges. In fact, that should work as a disincentive. Instead of paying so much to a government entity for using the car I would prefer to go on Public Transport – if it is available. So that is why suburban railway is so popular but they are unable to improve it because of over-crowding. They can’t stop it even for one hour. That then leads to creaking of infrastructure.

Still suburban railways are the best mode of transport in Mumbai.

Yes, what they are doing is the best. Now they should also get some breathing space to improve the system. So, if the crowd is taken out of that system and put in another system, the pressure on suburban railway will go down. Today they cannot even shut the doors. They have to manage with the constraints till we create some alternative infrastructure. Once that alternative is put in place, they will also run like Metro, because it is not a rocket Science. They too can run slick trains with modern features. But to give them that advantage, you have to have some other system in place.

So I think the major panacea for all infrastructure problems in our city is basically to improve the public transport system. Our city is spread longitudinally. It is a very narrow kind of structure and has many limitations. Mumbai has a road length of only 2000km while Delhi has 20,000km of roads. So look at the spread of that city, and look at the spread of this city. And within that, so much population, so much economic activity, so much employment generation! Most of the problems have arisen because of this.

Since commuting is a big problem, people prefer to stay close to their work areas. This complicates the housing system. All those menial labourers who cannot afford the daily travelling also prefer to stay in a shanty in a nearby area where work is available, despite bad living conditions. Now if you have a proper network then probably the whole housing scenario of Mumbai would also change substantially, because these corridors will encourage lot of housing development around the area. Also, if we have to shift people outside and get the land vacated even for our projects, people have no incentive because they lose their work, and employment. So if your public transport network is proper then you can create incentives in the systems.

Like in France, the employer pays for your transport charges whatever the salary package. With a proper Public Transport, our government can probably think of a lot of other measures to curb the tendency to have more personal vehicles.

Today those who can afford, buy a vehicle for each member of the family and since there is no parking space, they occupy the space on the roads. And many of these people are financially well off and well connected. Their Residents’ Associations are also very powerful and they do not allow the law enforcement authorities to even touch their vehicles. Nobody even wants to charge them for parking. But government too becomes helpless because there is no space and it has not been able to provide better transport infrastructure. So people have the right to have more cars. But with better public transport, people will own cars only for their convenience but for day-to-day commuting, they will voluntarily shift to public transport.

Previous: “Mass mobility and innovative mobility programs can help adoption of Electric Vehicles”
Next: Changing the face of Indian roads and cities