Satyendra Garg was allotted the AGUMT Cadre in 1987 when he joined the IPS (Indian Police Service). He is presently posted as Joint Commissioner of Police (Traffic), Delhi. He has done his MA in History and followed it up with LLB. He has served in Goa, Arunachal Pradesh and Mizoram too. He was awarded the Indian Police Medal for Meritorious Services in 2008 on the Republic Day. He is also the recipient of the Duty Medal for working in Arunachal Pradesh and Mizoram, and the Governor’s Gold Medal (on Independence Day in 1993). He was in-charge of managing traffic in Delhi during Commonwealth Games-2010.

Problems are immense on many fronts that sometimes we feel handicapped for solutions. Delhi has got more vehicles than all three metros combined. About two million vehicles come in the city every day from outside leading to congestion on the roads, parking issues and problems keep multiplying. The length of the roads mostly remains inelastic, of course infrastructure keeps developing in the form of flyovers or metro but it is not sufficient for the city. However, the biggest problem we face is low fines for traffic rules violations. Commonwealth Games (CWG) was a high point for traffic management in recent history. When we managed the CWG last year, we had virtually earmarked one lane of 210km for the CWG traffic. Initially, we used to wonder what would happen. We were expecting difficulties. But ultimately, what pulled us through the entire CWG was the stiff fine we could invoke for about three weeks. Lane violation had become an offence punishable with a fine of `2000. Also, invocation of section 144 Cr PC empowered us to arrest the violator and impound the vehicle. That made the difference.

Despite the claim by the traffic police and the government in Delhi, CWG was as big a failure as it was a success because people did not venture out of fear. 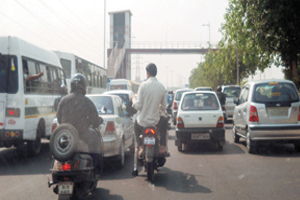 No, I would beg to differ. We were working on the penalty system since three to four months before the Games. We received the notification around September 20 allowing us to impose fine from September 22. Before the notification came, we had prepared our staff and people by extensive trials of the lane movement before the Games actually began. For trials we started with a strategy of least dislocation in the beginning. Deliberately we commenced trials on a Sunday between 11am and 1pm when the traffic is minimum to have least disruption. The idea was to familiarise people about the way the traffic would move during the Games. Media was expecting absolute chaos. There was massive curiosity on the part of media. But it worked. And because of its interest in CWG, media carried the concept to the people. There was live coverage of most of the trials as media had expected confusion and chaos. But with enough signage and adequate staff on the stretches, we did well in trials. We of course wanted people to know that movement on the city roads would not be easy during the Games.

I would say that to an extent our message of difficult situation on the roads was deliberate. After trying out our trials on Sundays, we moved to Saturdays – again a lean period and then, to non-peak hours on weekdays. It worked. Ultimately, after three to four weeks we graduated to morning-evening peak hours on selected roads. It definitely had effect because once you take away one-third of the road, the roads naturally get congested. There were absolutely difficult situations where everything was cramped while the Games’ lane was virtually empty. But the trials made people realise that at least for three weeks during the Games and one week before that, things will be difficult. Our strategy was to educate, give people alternatives, start with lean day and give a lot of information through advisories. We never prosecuted anybody for games lane violation till virtually the Games started. It was more of education and information.

We also worked for closure of educational institutions, commercial complexes and court complexes during the time of the Games. Because of extended holidays many people moved out of Delhi. That reduced the base volume of traffic for us. And with the beginning of two new Metro rails on Delhi Gurgaon and Badarpur lines before the Games, people got the option of using public transport for commuting and connection to main stadiums. Because of the terror threats, the City Police and Traffic Police cleared major markets like Chandni Chowk, Cannaught Place, Lajpat Nagar, etc. of all encroachments and no improper parking was allowed in the city.

We restricted movement of commercial goods traffic in certain portions of the city during day time and banned entry of commercial vehicles in the city on certain stretches during hours of the day when generally entry is allowed. During the Games, we prosecuted about 2500 odd people for Games Lane violation. That number is nothing when compared with the prosecution rate of 10,000 traffic violations in a day. So, in general, people followed lane discipline and observed traffic rules better during that time. There was less jumping of red lights, less improper parking and an improved security system in the city too during the Games.

It seems the traffic discipline was difficult to sustain…

for 21 days. People ask me why it cannot continue after CWG too. It just can’t. You can’t remove all the things for an indefinite period. The penalty structure given to us was also for a limited period. Also, you cannot impose so many restrictions on commercial goods’ movement and other public institutions permanently. After all, the city has to function normally.

When you came, you also started placing your traffic cops at intersections which wasn’t happening earlier. Does the effort continue?

Yes. My emphasis is on better traffic management and reducing fatality on roads. It has come down by 10% last year and we are targeting 10% again this year.

Yet, DTC buses have led to 21 fatal accidents from January to March this year…

It is correct that despite appreciable decline in overall accidents, fatal accidents involving DTC buses have gone up. We have communicated to DTC that being a government owned public transport agency, its track record on safety has to be of the highest standards. The DTC staff, particularly bus drivers, has to observe all traffic rules and possibility of accidents should be virtually non-existent. They have been given a strict warning by DTC management that if drivers make mistakes, the responsibility lies solely with the drivers in their personal capacity. Having said that, I would also like to draw attention to the point that DTC fleet has virtually doubled as there was a large scale induction of buses and drivers during the CWG. Many of the drivers had not got sufficient exposure in training and feel of metropolitan functioning the way they should have. They have to be exposed to right training, right education, and attitude training, etc.

There is this issue of the Gramin Seva autos plying on areas booked for Metro feeder bus services..

This is a government scheme. The idea was that since there were no feeder services particularly in rural or outlining areas, feeder services had to be started to provide connectivity to people in areas beyond Ring Road where sufficient transport facilities did not exist. But the drivers of Gramin Seva autos are not responsible drivers. As they belong to the private sector, these vehicles are being run for profit motive. Instead of six, at times they carry 22 to 25 passengers. But we have been coming down very heavily on them for callous driving, permit or registration violation, red light jumping or improper parking.

A lot depends on the coordinated efforts of the traffic police department and the transport department for improving the process of issuing driving licences!

The two major reasons for road fatalities are drunken driving and rash driving of private commercial vehicles that enter the city at night by drivers under the influence of alcohol. There is a provision in the Motor Vehicle Act of 1988 that apart from suspending the licence of a drunk driver, under section 185, the person can be fined `2000 or be awarded a six months imprisonment or both depending on the way the court decides. Suspension of driving licence of a driver convicted for drunken driving is a mandatory condition. This wasn’t happening in Delhi at all. There was never a jail term for a drunk traffic offender before August 2010. I didn’t want imprisonment for every drunk driver as that would be unfair. But those found with a high level of alcohol must go to jail for a few days at least.

So we had discussions with the Chief Metropolitan Magistrate (CMM), she appreciated our concerns but said she could not issue instructions on the issue. She suggested we send our officers to the court every time a prosecution for drunken driving came up, at least initially and plead for imprisonment depending on the alcohol content of the offending driver.

Previous: Meeting the ITS challenge in Delhi
Next: MMRDA gets Nhava-Sewri link