Ashok Datar of Mumbai Environmental Social Network & Mumbai Transport Forum writes about his experience of travelling by Delhi airport metro line and advocates the introduction of bus services to both the Delhi and Mumbai arirports.

As I landed at the old and busy T2 in New Delhi from Mumbai on a December afternoon to attend a National Urban Mobility Conference, I could not find any sign which would guide me to either a bus to the city or, more particularly, to the spanking world class airport metro. I kept on asking inside and outside the arrival hall and with some effort found that there was a small ticket booth for buying the ticket for the metro train to the city which runs every 20 minutes during the day. But I had to first board a small shuttle bus (12 seater) which would take me to the Aero City station which is the second station from the new Terminal 3 ? which is some distance from the terminals 1 and 2 . Interestingly, this train does not run during the night when most of the international flights take off or land. After buying a ticket for 30, I boarded the small and sad airport express shuttle bus where I was the only passenger! Aero city station was totally deserted. It was very large and there were three floors which I could climb with the help of smooth and shining escalators. I passed through the usual security drill. Within a few minutes, the shining but empty train arrived at the platform where the door opening was marked and the platform had proper paving. There are three stations only between the start at the T3 to New Delhi station ? Aero City, Dhaula Kuan, about 5km from the airport, and Shivaji stadium which is about 500 meters from the regular metro station ? Rajiv Chowk at Connaught place and the final station which is again a few hundred meters from New Delhi station. Both these stations are not at all connected and require? considerable walking or use of taxi/auto.

I travelled by the airport express three times at different hours of the day and I didn?t find the train anywhere near even half full. Each station is very large and disturbingly empty requiring a lot of walking. Fortunately, there are escalators to climb. There are only two exits ? and without a map/information to provide an orientation to users for the surrounding areas. 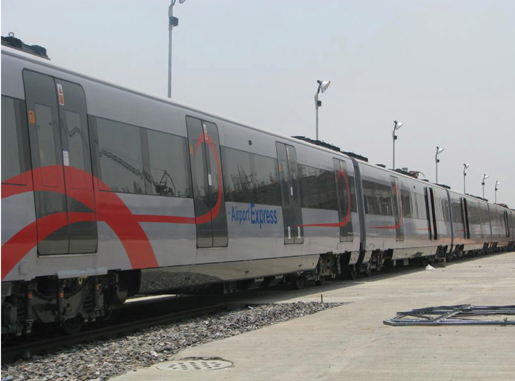 At Dhaula Kuan station, there is a sky walk which is necessary to cross 4+4 lane high volume highway next to the station. But strangely, this skywalk is not connected to the staircases and escalators inside the station – which has plenty of open space around to make the connection and which could reduce walking and cost? considerably for those who need to cross the high volume highway. There is a recessed cluster of four modern bus stops within 100 meters from the station servicing about 25 bus routes. The panels are full of advertising but the bus route numbers are mentioned only on the top of the bus stop and one doesn?t know what are the areas and roads the buses ply on and the destination (and frequency) of each route. After much enquiry with several passengers and bus conductors for about 20 minutes, I boarded a small private bus with a nominal capacity of 24 seats. But it was carrying more than 60 people.

I guess that this metro line is carrying about 2000/3000 passengers in a day with a fare of 150/trip. Typically a bus in Mumbai ( and so must be in Delhi )carries about 1200-1400 passengers a day. The metro has zero connectivity with other metro lines or perhaps with bus routes feeding metro stations. While returning to the airport from Connaught Place after three days, I got into an airport metro bus at Jantar Mantar( which has a frequency of 20 minutes) by paying a fare of 50 and it took me about 30 minutes ? 15 minutes longer than the metro. This was early morning and the difference in time would be much larger during peak hours but the bus fare was about 1/3. The bus has a facility for keeping a few bags. It took about six stops on this 15km journey. The bus had a big advantage over the train in that it didn?t require a lot of walking from the entry into station to the train and vice versa. So if you compare the overall time and effort, you come out better in a bus. Total staff used for the running the train service including service guards, ticket dispensers, maintenance crew and others put together, I guess, should be about 200.

To me, there is something seriously wrong with the planning of airport metro that has an investment of 5000cr. Instead or additionally, we need to have well publicised bus routes with baggage carrying facility from various parts of Delhi as most cities in the world have. Delhi and Mumbai airports each carry more than 30,000 passengers a day. A total of 100,000 employees ? direct or indirect- work at each airport complex. However, both the airports lack a robust bus system to the airports.

I didn?t have opportunity to observe the parking system, usage and fares in Delhi. But in Mumbai where bus or shared limo service to airport doesn?t exist, the usage of parking is phenomenal. I was denied this information under RTI claiming that airport is a private facility! But I guess that in Mumbai about ten to twenty thousand cars must be using this facility paying collectively about 30-40 lakh/day (at 60 for half an hour or part thereof) Mumbai airport collects more parking fee than the whole of the Mumbai city.

Mumbai?s new gleaming new T2 with huge investment is supposed to cater to 1.20 lakh passengers per day ? i.e. four times the current level. Will it then look like local train stations? But then we also want to build another airport near Panvel. We seem to be in a hurry to spend so much for the sake of prestige of our country while the railways will continue to be crowded and slow. If only we increase the speed of the current railway system by 50 to 100% for most of the high density routes, we will get a lot more for the investment of time and money.

Our priority should also be to provide bus services from various parts of the city to the airports. We need to allow / encourage private operators to operate limo service and support them by allocating space at the airport and other bus stops. With sms and internet, it is possible to get enough passengers to fill an hourly or 30/15minutes frequency limo service with a capacity of 12 passengers. This would be a better option to travelling alone by a taxi in an unsafe and expensive manner for a lot of passengers.

Previous: Road Safety Week
Next: Nation on the move – A lifetime of research into transportation