This is an additional feature which Siemens has installed in Mumbai, Delhi Airport Express, Gurgaon and Chennai Metros. This system takes inputs from the onboard ATP and drives the train without any manual intervention of the driver. The ATO drives the train perfectly along the speed curve which is not possible for a human driver. It then stops the train on the platform with an accuracy of ?50cm and automatically opens the doors (left, right or both depending upon station configuration) for the passengers. Further, the ATO uses less amount of energy. 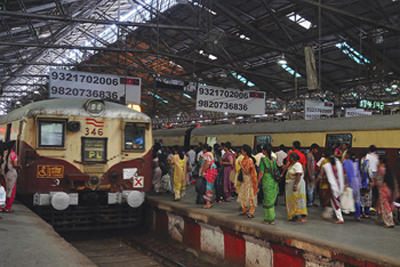 Siemens is the pioneering partner for the intelligent signalling solutions which are in operations for over last six decades on railway mainlines too. Route Relay Interlocking for signalling provided by Siemens was introduced for Mumbai suburban trains at Churchgate way back in 1950?s. Today the Chhatrapati Shivaji Terminus (CST) in Mumbai alone handles around 1500 trains daily. The RRI (route relay interlocking), Digital Axle counters (DAC) and AFTC (Audio frequency track circuits) which are manufactured locally by Siemens at its Nasik factory help in smooth and safe train movements across suburban trains in Mumbai.

Also, the Auxiliary Warning System (AWS) currently operational for the suburban railways in Mumbai, avoids any untoward incedents by automatically bringing the train to a halt when it tries to cross the red signal. In case the driver fails to stop at the red signal an emergency brakes are applied.

? Houses the FALKO tool which is used for configuring the time table of the train running operation.

? Has a sub-function called Automatic Route Setting (ARS) which sets the various paths (routes) for the train automatically in consultation with the interlocking and the timetable given.

? The Automatic Train Regulation (ATR) sub-function which tracks deviations to the train timetable and takes corrective action so as to recover the time delay.

Nowadays transport companies in India are increasingly demanding these systems, being aware of the important benefits that these systems give to them, like making fare transactions easier for customers and reduction of fraud.

We are strongly committed to continue in the Indian market and we expect to grow significantly.?

Automated metro lines are more energy-efficient and punctual, and can optimise passenger service automatically in real-time. Trains can travel at much shorter intervals as they require less headway. If passenger volume is high, additional trains can be deployed independent of the regular services at the push of a button.

In the driver-controlled mode the driver drives the metro train on sight, while stationary signals control railway operation. In partly automated mode (SCO ? Supervision and Control Train Operation), a train protection system continuously monitors the train?s speed and supports with information such as current movement orders, displayed in the driver?s cabin.

In semi-automated mode (STO ? Semi-automated Train Operation), upon starting of the train by the driver, the automatic 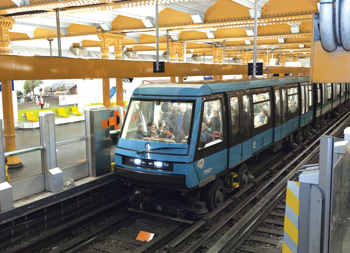 driving system takes over precision control of the movement between two stations on its own,

In driverless mode (DTO ? Driverless Train Operation), driving is controlled and monitored automatically. A train attendant can intervene in emergencies. The automatic driving system takes care of the entire operations on real time basis. When passenger volume is high, additional trains can be automatically sent into operation straight from the depot at the push of a button.

In unattended mode (UTO ? Unattended Train Operation), train operation is also controlled and monitored automatically, without any driver or attendant on board. Automated functions include functions such as coupling and uncoupling of trains, stabling of trains, and extended remote control and remote repair options. 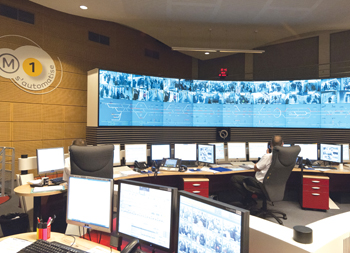 The platform barrier doors, which are necessary for automated operation, shield the platform from the line. Trains can be prevented from departing with the help of intrusion monitoring if someone enters the track area unannounced. Video images of the track area appear automatically in the Control Centre, enabling the personnel in-charge to take necessary actions. The sections of the tracks without platform doors are equipped with a platform track monitoring system which triggers an alarm if a person or a large object falls into the track area, initiating emergency breaks. Trains in the adjacent stations are also prevented from departing, with a message sent to the operations control centre and the service personnel on the platform. Gap Bridging at the doors prevent passengers from falling into the gap between the platform and train. All trains are equipped with state-of-the-art fire detection technology. A call point enables direct voice connection to the driver or with the operations control centre.