ITS in Pune Improving commuting and enhancing safety 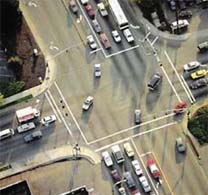 Pune, the cultural capital of Maharashtra, has long been a centre for education and manufacturing. In recent years however, the city has witnessed a spurt in growth and migration due to the rapid development of the IT and auto industries which, in turn, has adversely affected the traffic situation in the city. Once considered a city of bicycles, Pune now has almost 19 lakh vehicles and the count is increasing at about 370 vehicles per day with one lakh vehicles being added every year. Since 1960, while the population of the city has increased four times, the number of vehicles has risen 87 times. This has resulted in severe traffic congestion, increase in commuting time and poor mobility. A trip from Pune University to Korthud, a distance of 6-7kms, takes over 30 minutes during the morning and evening peak hours. What aggravates the problem is that compliance with traffic laws is very poor.

To address these problems, the Pune Municipal Corporation (PMC) set up CGRAPS IN 2008 which is already operational at some places. With it, the PMC aims to provide the travellers and road users timely and correct information about the traffic situation on the roads at different places in the city. This would lead to increased safety of commuters and enhanced efficiency of freight movement. With the intention of inducing more commuters to shift to the use of public transport, the project also seeks to minimise traffic congestion and commuting time along with improving mobility. Its yet another goal is to improve traffic discipline by better traffic enforcement, i.e., catching violators and collecting fines. It also promises to keep a track of Pune Mahanagar Parivahan Mahamandal Limited (PMPL) buses and octroi & garbage vehicles. It would improve security in the city by monitoring movement of criminals and trespassers at critical public places. It has begun providing information on the arrival and departure of PMPL buses.

CPPSS is used for detecting suspicious criminal activity. It consists of 70 Night Vision PTZ (Pan, Tilt and Zoom) Dome Security Cameras installed at 52 locations identified by PMC as critical. PTZ cameras can move left and right (pan) or up & down (tilt), and also zoom in and out. They can be programmed to view an area and/or can utilise alarm triggers to induce movement by the camera. They can also be programmed to follow a series of motions, e.g. sweep a parking lot or a city intersection every 10 minutes. Triggers such as motion detection or door contacts can alert the cameras to reposition themselves. PTZ cameras can be concealed from viewers by smoking or obscuring them by other means. The cameras are connected to a Central Control Room (CCR) from where they are monitored and controlled. Also, the data obtained is recorded at the CCR. The cameras are also connected to the PMC Octroi office, the Traffic Police headquarters and the Municipal Commissioner’s office.

GVMS is a vehicle tracking and fleet management system based on the principles of General Packet Radio Service (GPRS) and a Geographic Information System (GIS) map. It is used to manage a fleet of 200 vehicles which consists of 57 garbage vehicles, 10 octroi vehicles and 133 PMPML buses. GPS tracking data from each vehicle is transmitted to the control room through GPRS.

GPRS allows multiple users to share a transmission channel by opening the transmission for transfer only when each individual user needs it. This shared transmission is known as packet switching. Very few users always need on data transfer capability, so GPRS works for a vast majority of users. Modern web-related functions such as instant messaging, web browsing, streaming video and real-time email reception require intermittent data transfers and are good examples of the successful functionality of the shared bandwidth capability that GPRS offers. GPRS is also sometimes known as 2.5 G because it is thought to be situated in between 2G and 3G, the second and third generation telephony technologies.

At the control room, all the vehicles are monitored on a GIS map of Pune City. This monitoring facility is provided at the octroi office and PMC vehicle depot. The system generates a series of reports about the vehicles tracked by it: Arrival/departure reports of vehicles at specified garbage collection points, reports detailing time for which the vehicles have been used, speed violation reports, reports showing distances travelled by the vehicles in a day, routes travelled by the vehicles and reports enumerating instances where vehicles have halted for more than the permitted time at a predefined stop. All reports are generated with the vehicle number, type of vehicle, driver’s name, date, time and location where the data is recorded. Developed location database makes it possible to plot multiple vehicles on a single digitised map. Doing a mouse-over on the image of a vehicle displays the vehicle number, time, date, location and speed of the vehicle at that particular time. From the recorded data, it is possible to playback the route travelled by a vehicle. It is also possible to generate and print a report by vehicle numbers which can be used as duty reports for drivers.

RVDS detects and stores information about a vehicle that jumps a red light. It aims to reduce accidents and traffic violations by vehicles and to facilitate smooth movement of traffic. RVDS systems have been installed at 40 locations throughout the city. 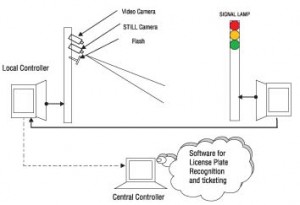 The broad schematic for a RDVS system installed at a traffic intersection is shown in the figure above. It consists of a video camera, a still camera and a local controller. The local controller is connected to the traffic controller at the traffic intersection and also to the central, remote controller which has Automatic Number Plate Recognition (ANPR) loaded on it. When a vehicle jumps a red light the still camera takes snapshot(s) of the vehicle while the video camera records a five second video shot of it. The still shots of the vehicle including the number plate are passed on to the remote controller using a Virtual Private Network (VPN) after processing at the local server. The remote server matches the number plate of the vehicle with a comprehensive vehicle database stored in the system. After identification of the vehicle’s details, the stage is set for enforcement – with the traffic police serving the offender a challan or violation ticket, and other associated legal procedures. The snapshots and video both serve as evidence of the traffic violation by the vehicle. Dr V Muralidharan, Associate Director and Head of Department, CIG, CDAC, Thiruvananthapuram says, “A major challenge in India in implementing an ANPR system is that there is no standardised number plate system in the country. Number plates come in different sizes, lettering, etc. This decreases the efficiency of an ANPR system to about 60-70% from about 80% to 90%. Thus, it is advisable to have a uniform standard for number plates in the country and strictly prosecute the vehicles not following the standard. Similarly, it is necessary to have a common countrywide RTO database which will make it easy to detect vehicles from one part of the country violating traffic laws in another part of the country.” The RVDS records and maintains a count of the daily, monthly and annual number of violations by vehicles.

Previous: TRAFFICINFRATECH EXPO 2011 On the road to success
Next: Bangalore Metro Faster, Safer and Eficient?