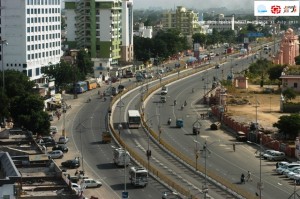 Bus Rapid Transit System (BRTS) in Jaipur could have proved successful. Only if the planners had given it a wee bit focused thought. In trying to plan a good transport mode in an Indian city – a mode that had proved successful in a few other countries – they forgot that the plan had to be tweaked heavily to suit Indian conditions. The result? Derailment of a good scheme.

But before we go into the reasons for the delays in the proper implementation of Jaipur BRTS, let us first see why was a need felt for a Bus Rapid Transit System in Rajasthan’s capital. In the absence of an effective public transport system that could meet the needs of a growing population (2.32 million in 2001) with an enhanced economic status, cars began growing at a pace much faster (9.4% of the total number of vehicles) than that of the public buses (6.32%). Normally, the mass transit of a city is expected to account for 50 to 60% of the modal split but a 2007 MoUD (Ministry of Urban Development) study found it to be much lower than that in Jaipur – the only metropolitan city of the desert state.

Jaipur’s public transport also has a reputation of poor reliability, poor road network and overcrowding. Most of its 260 buses operated by Rajasthan State Road Transport Corporation (RSRTC) are old and of standard size. Private transport companies too, despite having over seven times the number of RSRTC buses (they are mini buses though), are considered unsafe and uncomfortable. Their operators are known to run their vehicles according to their whims and fancies. And the biggest challenge for the planners is that there is virtually no scope for widening of the existing arterial roads. The slow speed of traffic in Jaipur (15 to 20kmph) leads to many accidents as people in a hurry try to overtake in the wrong manner and also disregard proper traffic rules in the process. Private minibuses run on 36 routes carrying 4.5 lakh people a day. The overlapping of functions of government departments and bodies also creates problems.

Hence, the state government decided to take up Bus Rapid Transit System along with Modern Bus Service and Metro Rail Project under the Mass Rapid Transit Plan. The aim was to ‘develop a comfortable and affordable transport system that would entice people to move from private vehicles to the public transport’.

Before the government froze any plan on BRTS, it carried out a feasibility study on the project in August 2005 through its arm – Rajasthan Urban Infrastructure Development Programme (RUIDP). PDCOR Ltd was given the task of carrying out the study which included conducting various primary surveys. PDCOR is a project development company jointly promoted by the Government of Rajasthan (GoR) and Infrastructure Leasing & Financial Services Limited (IL&FS) to facilitate private sector investment in the infrastructure area of the State of Rajasthan. The feasibility surveys consisted of traffic surveys, household surveys, road inventory and willingness to pay surveys; establishing the Urban Travel Demand Model; evaluating alternative alignment options; recommending a suitable transit system; estimating the ridership on the proposed corridor; examining the sensitivity of ridership; and suggesting an implementation framework.

Urban Travel Demand Model: In order to forecast the trip pattern of the city residents, an Urban Travel Demand Model was developed under the study. The forecasts pointed towards the worsening of Jaipur’s traffic conditions in the near future if the situation continued the way it was. The study pointed out that about 27 lakh total daily motorised passenger trips were made in the city in 2005 out of which 18% were through public transport; that above 50% of the trips were on two wheelers; that there was considerable movement in the east-west and north-south direction; and that by 2021, the total travel demand would increase to 62 lakh trips. 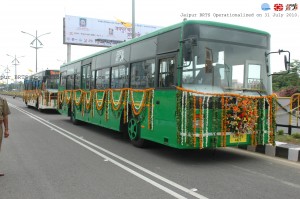 Since Jaipur’s roads could not carry such heavy load of traffic, it was decided to develop a well-organised transportation system that would take into account safety, comfort, cost effectiveness, sustainability and ability of the system to blend with the existing heritage structure of the city. The report of the study was submitted to Rajasthan Urban Infrastructure Development Project (RUIDP) in March 2006. The state government decided to make Jaipur Development Authority (JDA) the nodal agency to take the BRTS project further – both in terms of planning and implementing, mainly creation of infrastructure. So, the report was transferred to JDA. A Special Purpose Vehicle (SPV) called the Jaipur City Transport Services Limited (JCTSL) was created especially to see the bus operations. JCTSL is a joint venture of JDA and JNN (Jaipur Nagar Nigam). Based on the results of the study, the JDA was to make plans for an efficient and sustainable public transport system in Jaipur. M/s PDCOR Ltd, which had carried out the feasibility study, became the overall Project Management Consultant while technical consultancy for the infrastructure design was given to M/s Consulting Engineering Services Private Limited (associated with MAUNSELL and AECOM).

A ridership of 2000-6000 Persons Per Hour Per Direction (PPHPD), the average trip length of about nine kms and the bare minimum requirement of land acquisition were strong reasons to arrive at the decision of planning a BRTS mode of infrastructure under the solution of Mass Rapid Transit System along the selected mass transport corridors.

The study had pitched the ratio of various transport options as 30% for private vehicles, 60% for public mass transport and 10% for IPT. BRTS was expected to reduce the journey time on various roads. Its major aims were improvement in services, productivity of professionals and businessmen, safety of commuters, cost effectiveness (saving in fuels, better affordable options to commuters, and revenue for government), better environment by reducing pollution and relief to commuters.