What was the plan?

The plan for BRTS in Jaipur specified that the project, totaling 138km corridor length, would be completed in three phases. Out of this, 46.7km was identified for the first phase corridor in which roads were to be developed to connect North-South and East-West ends of Jaipur at a cost of `597 crore. MoUD and Government of India approved the funding under JNNURM. 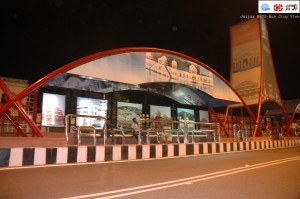 Dedicated bus lanes, priority at the junctions – free left turns, crossings for pedestrians and low-floor state-of-the-art buses with manual transmission and in-built Passenger Information System (PIS) through various applications of the Intelligent Transportation Systems (ITS) were part of the plan on bus based public transport system. For putting this to practice, the state government constituted a Unified Metropolitan Transport Authority (UMTA) in 2008. The Authority is chaired by the Chief Minister. NMV tracks along the BRT route and separate contacts for bus operators, advertisement-cum-corridor management, FoBs at mid-block bus stops and route rationalisation for mini buses were some of the planned highlights of the system. When the system got underway in 2010, railings were provided on both sides of the BRTS corridor to avoid accidents and to segregate the BRT up and down movement. Rumble strips were provided where medians were not possible. A 24-hour helpline for the commuters was a significant part of the plan.

Intelligent Transport Systems: ITS was expected to play a major role in the successful operations of the BRTS buses in Jaipur. Apart from the PIS which is an on-board application, GIS system was planned for ‘off-board’ PISO, vehicle tracking and operations monitoring. ITS was also to help in data acquisition and processing of data, bill payments, MIS and in monitoring the quality of services like punctuality of buses, their reliability, vehicle productivity, etc. While Automatic Fare Collection system was decided for fares, the guidance and alignment of buses with platform was decided to be based on a manually steered and optically guided system. Later, e-ticketing, voice-enabled service, and a GPS system to track the buses, proper signages to indicate bus routes, revamped bus stops were announced by JCSTL.

Colour-coded buses: What is interesting about these buses is that they are colour-coded – different colours for different routes. That makes it easy for the commuter to identify the buses. Also, the fare system is unique – flat fare which reduces the cost per passenger. Jaipur is the first city in the country to do so. 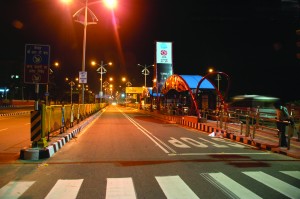 The bus stops, 35m long and 3m wide, along with the bus stations (54m long and 3.5 m wide) and shelters were constructed by JDA keeping in mind the smooth operations of the up and down movement of the buses. Sufficient space was provided in the well-lit and ventilated bus stops that were constructed of mild steel circular pipes in order to collect revenue. The Rajasthan Urban Development Fund of the Government of Rajasthan agreed to give loans for bus queue shelters to be built on PPP format.

It was also decided that in mixed traffic, the BRTS buses would operate beyond the BRT corridor and go up to the high traffic nodes. For this purpose, destination oriented service design was planned. However, the BRTS buses were to directly service the railway stations, bus terminals and other major traffic generating points. The operational headway was decided at two to four minutes.

This passageway (Package I) – 7.1km long and with a Right-of-Way (ROW) of 40-50m – was completed by the end of 2009 and commissioned in 2010. It has 22 bus stations, low to medium side friction, light street parking and nine major intersections. It connects large residential and industrial areas that generate high traffic. Buses began plying on this corridor in 2010. The CNG/diesel buses have a floor height of 650mm and 400mm and capacity, inclusive of sitting and standing passengers, is 90.

Likewise, Package III which will be 13.35km long with a ROW of 18-35m and 14 major intersections will face very heavy congestion on the roads. This package too is divided into Package IIIA and Package IIIB. The former will have 31 staggered bus stops while the latter, eight staggered bus stops and two island bus stops. This package will serve institutional, commercial areas of the walled city and the residential areas. On-the-street-parking has been proposed at many locations of this corridor. Where ROW is sufficiently available, 5.5m wide service roads will be constructed.

There will be four bus terminals and the bus stops will be at an average distance of 500 to 700 metres. The bus stops that are built have adhered to the distance decided upon. Bus shelters too fit in the scheme of things for handling large commuter volumes and feeder bus services – they will be used for off-board ticketing, passenger information, etc.