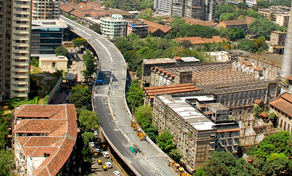 For a longitudinal city bursting at the seams with a continuous human inflow and without any scope for a horizontal expansion, Mumbai’s journey to a tension-free travel is still fraught with potholes, traffic jams, extremely narrow bylanes, traffic indiscipline and acute limitations to traffic management. Hence, the regular dedication of flyovers to a distraught populace to ease its travel woes has always been welcomed with relief. Despite the illogical planning some of these flyovers have been based on, the hassled commuter has always been willing to ignore the loopholes as long as his commute time gets reduced.

This is why the latest addition – the Lalbaug flyover – to Mumbai’s now long list of flyovers means much to the city’s travellers. This engineering marvel in transportation infrastructure has been hailed as a boon for people travelling from Jijamata Garden to Suparibaug and vice versa.

Mumbai’s longest flyover boasting a length of 2.448km was thrown open to the public on June 6 this year by the Chief Minister of Maharashtra, Prithviraj Chavan. Driving over nine traffic signals (seven vehicular and two pedestrian), a motorist can now cover the distance of Sion to Chhatrapati Shivaji Terminus (CST) in three to four minutes instead of the 30 to 40 minutes he took earlier. Not a mean feat. Rahul Asthana, the Metropolitan Commissioner of Mumbai Metropolitan Regional Development Authority (MMRDA) – the nodal agency for the project – had recently said, “The other three flyovers on this road along with the Lalbaug flyover will help the motorists avoid a total of 18 signals.” He meant the Maheshwari Udyan-Tulpule Chowk flyover, Sion Hospital flyover and Hindmata junction flyovers – which have already been in use. He is right because till the Lalbaug flyover came up, driving on Dr Ambedkar Road was a nightmarish experience.

The Lalbaug flyover was conceived about a decade ago based on a traffic survey that was carried out on three factors — traffic count, travel time and the bottlenecks. Initially, there was a talk of two flyovers of two lanes each, at two locations of the two kilometre stretch – one at Bharatmata Junction and the other at Lalbaug junction. But files kept moving in the government corridors. At that time, MMRDA involved MUTP (Mumbai Urban Transport Project) and MUIP (Mumbai Urban Infrastructure Project) and MSRDC (Maharashtra State Road Development Corporation) in the planning phase.

The file didn’t move forward much after that. Sometime in between, a fresh look was taken at the proposal and an expert committee, headed by a retired secretary of Public Works Department (PWD), was formed. A few studies later, it was decided to have a single flyover covering the entire distance with four-lanes (two south bound and two north bound). The flyover was to eliminate the signals at E S Patanwala Marg, Dadoji Koddev Marg, T B Kadam Marg, Dattaram Lad Path, Lalbaug Junction, Bharatmata junction, ITC junction (all vehicular signals), Voltas junction and Tejukaya mansion (both pedestrian signals). Work on the Lalbaug flyover finally began on January 14, 2008.

Says PRK Murthy, Chief, Transport and Communication department of the Authority, “There was no issue of having two flyovers. We planned Bharatmata-Lalbaug flyover as a four lane continuous flyover from Bhoiwada to Jijamata Gardens. We took the decision in August 2007 and right from appointing the consultants to awarding of the tenders, the process was completed in a record time of six months. By avoiding seven vehicular and two pedestrian junctions, the flyover offers complete solution to north south traffic of South Mumbai in the stretch. And since it rests on single pier system, it makes maximum road width available to the commuters.”

The Lalbaug flyover has been constructed at an estimated cost of र178 crore (‘estimated’ because 3% of the work is yet to be completed). The balance work pertains to the work under the flyover – at grade level – for providing protection to the vehicles so that they do not hit the piers. A three metre wide divider is yet to be built to keep the vehicles running at a safe distance at all the seven vehicular junctions and two pedestrian crossings. The divider will act as pier protection, safeguard the segment from high vehicles lest they hit the piers and segregate the traffic. The remaining work also involves beautification of the area below the flyover with a landscape. The BMC will use Japanese technology to develop a single 2km by 3km lawn. Grass and shrubs will be grown in the dividers under the flyover – everywhere except at the obligatory spans.

Says Vikas Naik, Executive Engineer for the project for MMRDA, “One more purpose of providing the divider instead of using the space for any other purpose is to provide maximum space for traffic on the road below for better management. Unlike most flyovers, this flyover is not supported by two piers on each side. We decided to go in for single pier system because the road width near Voltas is very narrow – only 23m. Had we taken 10m out of 23 for the piers, what would we have left for people to commute at the grade level? That is why we have also discarded all the other usages like parking. We saw to it that only single pier estimate is provided so that only minimum necessary land is occupied for the divider.”

Foundation: It was found in the geotechnical research that hard rock (basalt) existed at an average of 15m which led to the decision of having the foundation as end bearing piles. Cast in situ piling was agreed upon as against the precast piling for the purpose since the latter leads to vibration and noise.

Single peer superstructure: As mentioned above, owing to the narrow width of only 23m at places, it was decided to rest the superstructure on single piers. This was done to provide maximum carriageway for vehicles at grade level. Pier and pier heads were designed in an integral manner. This facilitated continuous concretisation with single form which helped in saving time. Plus, it gave the structure an “elegant architectural appearance”.

Previous: Attempting A Road Revolution in Rajasthan
Next: Tenders for Delhi-Meerut Expressway 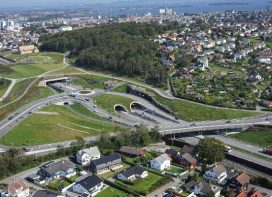 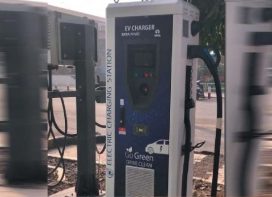