Delhi NCR based Onnyx is a ISO 9001-2008 certified Company involved in the business of Traffic Management Systems & Solution. With a pan India presence, the company is operating traffic signals in many cities including Delhi, Kolkata, Chennai, Mumbai, Bhopal, and Srinagar. Jitendra Kaushik, CEO, Onnyx says that today his company is maintaining more than 2000 signalised intersections.

The technology offering from Onyx include Intelligent Transport Systems, Red Light Violation Detection Systems, ANPR and Wireless Traffic Control. The company has recently installed of ITMS in Kanpur city that includes 75 recollected traffic signals controlled by center control and command center along with 30 VMS for giving advance information to the commuters on the road. In Gwalior, we have installed normal traffic signals.

Are adaptive signals successful in India?

Like in any other country, adaptive traffic signals are very successful in India.

But the problem is that people do not obey the signals. So far it is successful but in the peak hours when there is a kilometer-long traffic jam, adaptive signal will certainly not work. The ATCS is controlled from the control station of the police only. Based on the data from traffic signals the traffic control room adjusts the timing at each intersection. So you can have long green corridors.

You have multiple technology providers

Onyx is a system integrator. So it can use any technology. Imported technologies from the UK, the US and Australia apart from the ones developed in India are being used by us.

Foreign technologies from other countries are developed for homogenous traffic. But our traffic is heterogenous. Keeping this in mind, we use CoSiCoSt software which is the central command and control software developed by CDAC suiting Indian traffic conditions. However, if a customer wants SCAT, SCOOT, ITACA or any other foreign technology we can provide.

In the end, it depends on what the customer wants. We like to work as a consultant, as a team to the purchasing authority and not as a supplier only. There may not be a readymade solution fitting for all the cities. Each city has got a different traffic pattern and based on that we suggest and we guide our customer as to which technology to use.

These encourages lane driving because when you want to turn right and see the green signal, the driver intends to go right. The Delhi police selected the design which we had presented to them. Even now, there is a very big interception in front of Delhi police headquarters which is called ‘A’ point or ITO crossing where there are four lanes. We have installed a 14m long cantilever arm on which there are four set of lights for different lanes. It is the longest cantilever arm in the country.

For the visually challenged people we had installed pedestrian traffic signals with a sound which were not available in India till then. For green light, there will be a sound which will help one to cross the road. The sound gets intensified to indicate that the time is less. We have also introduced countdown timers for the pedestrian crossing in Delhi.

Is the current tendering process effective? Because the installed traffic signals should be maintained as well. 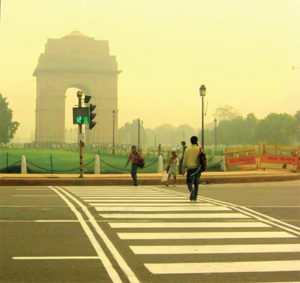 The tenders which are being released in the market are in bits and pieces; for example, different authorities come with different specifications for VMS, for ATCS and RLVD. Our request to the authority is to come up with composite tenders, buy the entire system that includes ATCS controlled and commanded by the centrally managed system. Another suggestion is to give proper emphasis on the maintenance of signaling system by the authorities. No matter how smart or how advanced system you have, if not maintained well, it creates bad public opinion. So the authorities should come out with RFP (request for proposal) that speaks of design, supply, installation along with maintenance for next ten years.

In this case, the system provider will use the best quality material. For example, the standard specifications for cable is that it has to be ISI certified. The prices of ISI marked cable varies by 70 to 80% and from brand to brand. You go in for the best brand and they will be 60 to 70% more expensive than a local ISI marked cable. The authorities ask for simple ISI marked cable; then you will purchase best of the cables so that you do not have to replace.

You have installed innovative solutions in Delhi

In 2009, when Delhi Police was looking for new design and advanced traffic signalling system, we installed a new type of signal at Ashirwad Chowk at Dwarka to show how a traffic signal should look like. At this chowk, there was one traffic signal for each lane, so on a three-lane road there were three sets of lights.