Dr. Narasimha Murthy, a registered traffic engineer in California and currently an independent engineering consultant to NHAI for Highway Projects near Nagpur, writes on a few points that, if addressed, will improve and lead to better management of highways 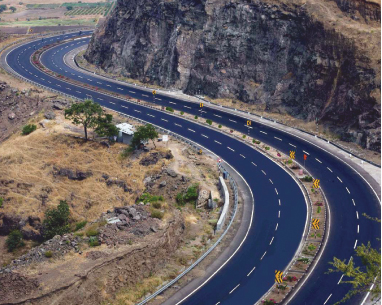 It is important for Governments to recognise that ?transportation is the bloodline of any economy.? Most of the developed nations like the United States, Canada and some European countries have good highway systems, and good railways, waterways and airports too. In India, an estimated `200-300 billion is lost to the economy annually due to constraints of road network capacity and quality. Annual road safety toll is high: At least 85,000 deaths are attributable to road accidents and the total number of accidents exceeds 1,500,000 people across the country. These trends, together with constraints on the resources, highlight the need for better transport system.

The National Highways Authority of India (NHAI), an autonomous agency of the Government of India, is responsible for management of a network of National Highways (totaling over 71,772km in length) in India. That includes development, maintenance, management and operation. NHAI also helps in implementing the Special Accelerated Road Development Programme for North Eastern Region (SARDP-NE) ? a project to upgrade National Highways connecting the state capitals to two lanes or four lanes in north eastern region. This is a step in the right direction: the United States did the same after the end of World War II in 1945 ? it built its highways and freeways connecting major cities and towns.

From a long term perspective, maintenance, law enforcement and education are required for better management of highways. For this, a programme has to be developed by NHAI to safeguard the large investments made to build these highways by both ? the Government and the private companies. The construction of the highways costs very large sums of money, mostly paid by private funds (concessionaires) through Design, Fund, Build, Operate and Transfer (DFBOT) type projects. But maintaining the highways, after they are relinquished by the concessionaires, should be the responsibility of NHAI. It must be noted that most of the users near these highways do not recognise the increase in speed, particularly the locals accessing the highway (cars, pedestrians, bicycles, carts, motorcycles, rickshaws and other slow moving vehicles such as tractors), leading to fatal accidents.

Another major element that needs to be addressed by NHAI is the use of Indian Roads Congress (IRC) Codes for constructing the highways. The IRC codes cover topics from simple lane markings to building bridges and ramps and are available as individual code books for various topics related to highways with specific numbers denoted on the books for use. It would be a good idea to put all the codes together as ?one manual? for use; this will assist in updating them as required without having to search through several books.

Some of the IRC codes are too old or outdated for use in the field, yet they are enforced and taught in engineering colleges for use. An effort has to be made by all (Central Road Research Institute and intellectuals) involved in developing the IRC codes to update the material on a regular basis to meet new industrial standards and construction techniques. Using new standards and techniques may actually lower the cost of constructing these highways. For example, the IRC code on slopes and embankments recommends 1:2 to 1:3 slopes in embankment since such slopes will never fail but no one is bothered about the fact that extra land is to be acquired to accommodate the extraordinary bottom width of the embankment. The cost of unnecessary land acquisition can be saved if things are built as per site needs. Also, NHAI should encourage ?engineering judgment? as one of the tools to be used in the field as per site conditions and not just stick with what is in the IRC code for all elements.

The Indian Roads Congress (IRC) Codes for constructing the highways cover topics from simple lane markings to building bridges and ramps. The codes are available as ?individual code? books for various topics related to highways with ?specific numbers? denoted on the books for use. It would be a good idea to put all these codes together as ?one manual? for use. It will assist in easy updating as new information or techniques become available. Also, the users will be able to find information in one book and cross-refer easily instead of going through the tedious process of searching them in several books. 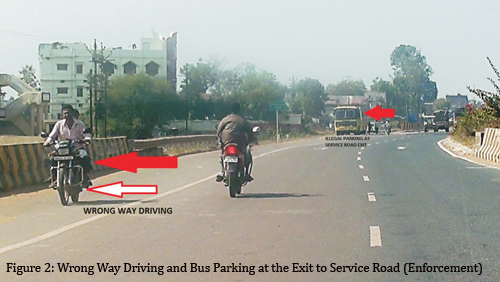 Maintaining the completed highways needs a great deal of planning with respect to assigning personnel and getting the required funds. Therefore, a master plan has to be drawn with respect to funding, personnel, enforcement and education. A programme for regular checkup and maintenance of all highway elements such as barricades, fences, bridges, road surfaces, signals and public underpasses is needed. Some percentage of the highway construction must be set aside for this purpose.

For example, it was observed at certain places near villages/towns (between Bhandara and Chhattisgarh?s completed highway) that the cat-eyes used for cross walks were not fully illuminated due to either failure or non-maintenance or too much ambient light near the crosswalk. The non-operation of the cat-eyes makes it difficult for the drivers to see the crosswalk and the pedestrians from a safe distance to be able to stop during the night time. Similarly, cat eyes are required at entry and exit points to service roads (as shown in Figure 1). The constant maintenance of the cat-eyes and signs? reflectiveness along the highway is essential for safety to both motorists and non-motorists using the highway.