Share !
Over the period of time, Metro projects in India have developed a better integrated intermodal system that offers the possibility of simultaneously reducing costs, increasing operator revenues and most importantly, passenger comfort

With a modest beginning of 8 km in 2002, Metro rail has shown phenomenal growth in India. In the financial year (2018-19), 140 km of metro lines have been opened for the public (till 10 February 2019). Out of the 585 km of operational metro lines as on 10 February 2019, 326 km have been made operational after May 2014. Currently, there is about 600 km of sanctioned metro lines under construction, which will be operational in the next five years, and there is more than 1,000 km of metro line proposals under planning. This clearly shows that Mass Rapid Transport System (MRTS) has emerged as one of the most effective means of mobility for the citizens in tier-1 and tier-2 cities and Metro has been a major player. 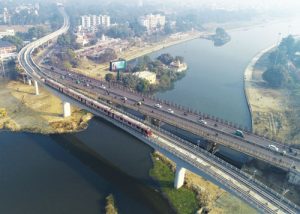 However, the only thing that makes commuters think twice about taking the Metro is the fact that there’s no proper end-to-end or last-mile connectivity for almost all stations that are functioning. But the tables are going to turn now. After expanding and sustaining several metro rail networks and new metro lines across India, the Ministry of Housing and Urban Affairs has shifted attention to improving the last-mile connectivity for metro passengers. This was one of the objectives articulated in the 2017 National Metro Policy. As part of the last mile connectivity, the ministry has now focused on feeder bus services, electric rickshaws, smart cycles which can be rented out, electric scooter services, as well as partnerships with cab aggregators. The Union government has already drafted a last-mile connectivity plan for as many as ten metros in cities such as Bangalore, Delhi and Kochi.

TrafficInfraTech interacted with heads of Kochi, Lucknow, Mumbai, Maha Metro and Chennai, featuring some of their best sustainable practices which can be replicated by other Metro projects in India. These Metro projects have done better integration by reducing transit costs, eliminating duplications, and employing the most cost-effective model in each segment of the system.

A key focus of Kochi Metro Rail is to integrate all public transportation modes; be it waterway traffic, taxies and auto-rickshaws or private, and Kerala State Road Transport Corporation buses under one centralised management system. Through this, all the routes and timings would be harmonised with the commuters in mind.

The Kochi Metro has prepared the law for setting up a Unified Metropolitan Transport Authority, with these objectives in mind and it is expected to come in the current assembly session. Private bus operators have formed seven companies and nine auto-rickshaw unions have formed a single society to enable these changes. KMRL has also prepared a non-motorised transport (NMT) master plan for Kochi, comprising the identification of priority NMT corridors in a 2-km buffer area on either side of the metro corridor. The objective of this initiative is to provide safe, accessible and comfortable footpaths, improved conditions for cycling, bicycle parking facilities and urban renewal through placemaking. This will also work as lastmile connectivity from almost all the stations. 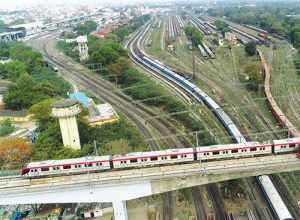 After several rounds of meetings with bus owners and operators, 1,000 private bus operators have formed seven bus companies. In line with this initiative, a 350-meter-long walkwaycum- cycle track was constructed by KMRL on Shihab Thangal Road, Panampilly Nagar as a pilot programme. KMRL has started feeder-buses/taxies/ auto rickshaws, preferably electric or CNG, at some metro stations to operate an environment-friendly transportation system for the city. Kochi Metro has also planned a Public Bike Sharing (PBS) scheme as a pilot project with four docking stations having seven cycles each.

Last mile connectivity is one of the top priorities for Lucknow Metro, and in this direction, UPMRCL has been working with state authorities. UPMRCL is in process to sign a memorandum of understanding with Urban Mass Transit Company (UMTC) and UBER to meet the demand of Metro commuters for feeder services across the city. That said, Lucknow Metro has also planned to hire E-rickshaws as feeder services because of their benefits to the environment. Meanwhile, Lucknow city bus has also been integrated within UPMRCL for providing feeder bus services. As far as seamless ticketing is concern, the authority has tied up with HDFC Bank to provide passengers with GoSmart Card. The HDFC Bank facility has enabled customers of all banks to purchase metro tokens and prepaid cards easily by making it cashless. With the tie-up, the LMRC has made it convenient for commuters to purchase tokens, reload prepaid GoSmart cards using any debit card, credit card, or net banking facility, on the website of Lucknow Metro. Passengers using the GoSmart cards are getting facilities like free WiFi, hassle-free travel as well as freedom from standing in queues with online recharge facility. 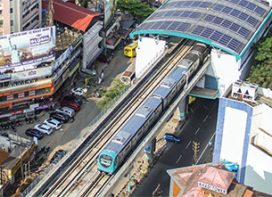