Advanced Traffic Management Systems – the need of the hour 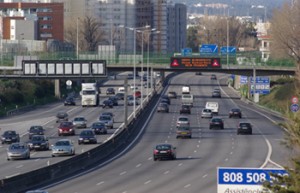 As the Indian Economy opened its doors to the world in 1991, the multinational giants from all sectors rushed to grab the opportunities available in the lucrative Indian market. As these companies set up their offices and plants in India, it became necessary to provide them with world class infrastructure – roads being the most important part of it. The Union and State Governments are currently investing heavily on road infrastructure with the schemes like Golden Quadrilateral, NHDP (National Highway Development Project) and Gram Sadak Yojana. With a total length of over 3.314 million kilometers of roadways, India has the third largest road network in the world handling almost 80% of passenger traffic and about 65% of freight movement in the country. Since a well established road network is crucial for the economic and industrial development of a country, the government of India is taking steps to modernise the roads.

As technology plays a major role in ATMS, it has to be reliable and should leave no margin for error. For that, more and more technology providers should come forward with newer and cost effective technologies. 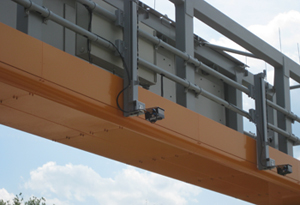 Even if the length and width of Indian roads is ever increasing, traffic congestion has become a major hurdle to the free flow of the traffic – both on national highways and the state highways. The developed nations began feeling the heat of this problem in the twentieth century itself. The drivers in the 68 largest urban areas in the U.S. experienced an increase in traffic delays due to congestion from 11 hours per year in 1982 to 36 hours in 1999. The estimated cost of traffic congestion in these 68 areas totalled $78 billion, representing a cost of 4.5 million extra hours of travel and 6.8 billion gallons (25.7 billion liters) of wasted fuel (Schrank and Lomax, 2002). This wasted fuel is bound to have negative impact on the environment.

We are facing the same problem in India now. Of course, the causes of traffic congestion are multiple – increasing number of on-road vehicles, bad road conditions, erratic weather conditions, accidents and disrespect for the traffic rules being a few of them. Each of these causes has to be dealt with separately. But the problem of traffic congestion can be addressed by using the advanced technology to a great extent. The developed countries are dealing with traffic congestion with Advanced Traffic Management System (ATMS). Awareness of ATMS is spreading in India too of late, where along with traffic congestion, on-road safety too is a big concern. That is why ATMS needs more attention from the government, the concessionaires, developers and the contractors. 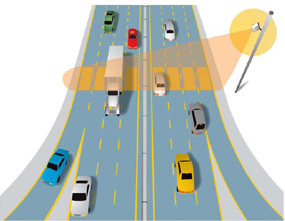 • An inflow of information (e.g. traffic hold-up, accidents, etc.) regarding the road status to the road management (operations) company and in turn, to the VMS (Variable Message Signs).

• Subsequent decision-making (e.g. sending a patrol vehicle to regulate traffic or an ambulance to the accident site, etc.) by the road management (operations) company based on the above information. These decisions are normally guided by their standard procedures and policies.

The following are the main sub systems of the ATMS:

• Variable Message Signs (VMS): VMS give travellers information about special events. Such signs warn of traffic congestion, accidents, incidents, roadwork zones or speed limits on a specific highway segment. They may also ask vehicles to take alternative routes, limit travel speed, warn of duration and location of the incidents or just inform of the traffic conditions. VMS are available as fixed VMS as well as portable – trailer mounted ones. 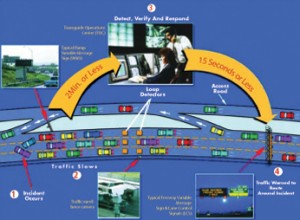 • Automatic Traffic Counter and Classification System (ATCC): ATCC keeps a count of vehicles for a specific highway segment. Along with this, the vehicles can be classified according to their classes. Passive Infrared or Doppler radar technology is used for ATCC.

• Emergency Call Box (ECB) System: In case of any emergency such as accidents, ECB serves the need to communicate with the police or ambulance service.

• CCTV (Closed-Circuit Television) Monitoring System: CCTV is used for continuous video monitoring at specific highway segments to convey the event information such as traffic conditions and accidents to the control room.

• The Supervisory System at the Control Room: ATMS operation and function is based on a centrally managed system in which operators located in the Control Room are able to use systems (including computers and communication devices). For example, if a visibility sensor detects poor visibility due to fog, this information is passed on to the control room and the control room, in turn, passes it on to a VMS.

The goals of ATMS are:

• Increasing the productivity of the transportation providers

• Conserving the energy while protecting the environment.

As technology plays a major role in ATMS, it has to be reliable and should leave no margin for error. For that, more and more technology providers should come forward with newer and cost effective technologies. All the respective ministries (of union and state governments) should be pro-active and should lay down stringent specifications for all the sub systems of ATMS. While doing that, the Indian climatic conditions, road conditions, etc. should be considered. Just copying the specifications from developed countries will not serve the purpose. Opinions of the developers, who actually work on the highways and face many problems, must be considered for the purpose. Research and Development (R & D) should be given utmost importance. Intelligent Transportation Society of America estimates that more than $209 billion will be spent on ITS programmes by the end of 2011. We also need this kind of seriousness in implementing the ATMS. Over and above this, just implementing the ATMS will not solve the problem – the enforcement authorities should also swing into action and the traffic rule violators should meet with strict action.