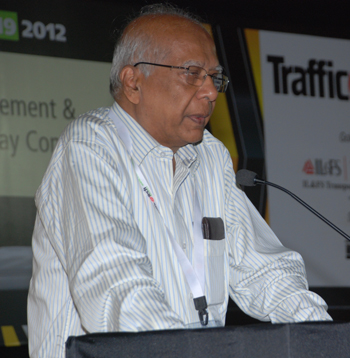 Welcoming the panelists and delegates, Jayaraman Nair, Chairman, Virtual Info Systems Pvt Ltd cited a few examples that highlighted the need for safety and traffic management on highways and said that there was an urgent need to look at the issue in detail.

In his opening remarks P L Bongirwar said, “Today, construction of roads has been proceeding at a very fast pace throughout India and this has raised many concerns regarding safety and traffic management. These concerns are different for rural and urban roads, and need to be addressed by looking at the respective issues involved in both of them. Also, some recent accidents during the construction of infrastructure projects underscore the point. Recently, a bracket fixed on a signal on the Western Railway came down, killing two people. Some time back a crane being used in a road construction project had collapsed on moving traffic, again killing people.”

Bongirwar said that there are four stakeholders in construction of these projects – the employer who is executing the project, the police authority which has been given the responsibility of management of traffic, the travelling public – commuters, motorists, etc., and the collective group of other government departments involved, apart from the authority executing the project. “We need to hear the difficulties faced by these stakeholders, especially the public, duri ng highway construction, and try to come up with a solution. These suggestions can be noted by the representatives of the implementing government bodies and concerned infrastructure companies, and can be addressed or incorporated in future in the ongoing projects”.

When I was with MSRDC we knew that it was difficult for the police to suddenly increase their force for traffic management during the construction of the highways. We created a force of retired traffic constables to help with traffic management. Though they did not have powers, they knew all the traffic rules. So they took the offender to the competent police personnel and the system worked very well. Also, when the Sion flyover was being constructed in Mumbai, the police insisted that we keep a crane on standby throughout the construction. Though I did not like this initially, I realised the importance of this later – a huge number of vehicles were passing through the highway and could have been damaged in case of an accident. So keeping the crane was something like paying for an insurance in case something happened. — P L Bongirwar

Police are given roads which do not cater to most of the stakeholders: Praveen Sood

India has the highest number of road fatalities in the world. About 80% of road fatalities in India occur on the highways while the remaining occur on city and other village roads. But ironically, about 90% of our efforts and resources for improving traffic management, bringing in new technologies, preventing accidents and improving safety are directed at city roads. Very little attention is given to the highways. This is mainly because of the common perception that the job of the traffic police is to ensure that people get to work and return home safely. During the course of this, safety aspects are lost or neglected.

We should ask which government department is concerned with safety on Indian roads. The Health Department’s role has been limited to collecting statistics, beyond which it has not done much. The transport departments, which have been trying to play the role of coordinators between various departments such as home, health and public works departments, have been unsuccessful too. The police department has mostly been concentrated in cities and does not do much traffic management and traffic policing on highways. The only police enforcement on the highways is to check if drivers have different certificates for pollution and registration.

Similarly, trucks are stopped at octroi and toll centres on highways – the focus of both the home and transport departments in India again, is only on revenue collection and not on safety. A question which could be asked here is: Do we need good roads? Most would say they need good roads plus good behaviour of road users on these good roads. But do good roads mean safe roads? Not necessarily. A case in point is a 150km stretch of the Bangalore-Mysore Highway which was upgraded to a 4-lane highway from a 2-lane highway in 2006. Because the roads are better today, cars on this stretch move at around 120-140km/hr compared to the earlier speed of 40 to 50km/hr. But then, road accidents have nearly tripled after 4-laning of the stretch. In this scenario, one cannot be happy with all the other gains such as better economy, increased land value, etc., that come by upgrading the road. But sadly, no one seems to be concerned with this situation because we don’t seem to attach much value to human life.

The reason for the increase in accidents on new roads is that safety aspects are neglected during construction of roads and highways. During road design, often costs are cut at the expense of safety as the focus is on revenue collection. Due to this, while new roads being constructed are of much better quality and support high speed traffic, they are not necessarily safer. The police cannot carry out enforcement meaningfully in the absence of proper traffic signals, signages, subways and over-bridges for pedestrians. Many road safety audits have been carried out by the government but the reports have been gathering dust because implementing the audit recommendations does require a significant investment and there has been no proper planning to do this. A paradigm shift is required to build pedestrian-friendly and safe roads to focus more on road safety rather than revenue collection.

It is difficult to get retired traffic police personnel for duty during highway construction. My experience is that they are not interested, and often apply for voluntary retirement because of the bad conditions under which they have to work – dust, pollution. Their lifespan is actually decreasing under these conditions. This condition becomes much worse during highway construction considering the unhygienic and unscientific ways in which we are constructing highways. — Praveen Sood

The second fact is that though the roads are becoming good, our driving behaviour is not becoming proportionately better. Motorists take good roads as a license to drive the way they please. The problem is that all our road policies are motorist-centric – no attention is paid to the needs of the pedestrians. When highways are made, often the fields of farmers are on one side and their houses are on the other side of the road. Similarly, the huts of the villagers are on side of the highway while the schools of their children are on the other side. We do not make a small subway by which the farmer or villager can go to the fields in his bullock cart or to his children’s school. Thus, he is forced to cross the dangerous highways that have very fast moving traffic. Pedestrian crossings, if at all constructed, or median openings are very far away which the villager or farmer would not use. We don’t construct easily accessible pedestrian subways or skywalks. We forget that the vehicles need to slow down when they near these villages because there is no way the children can cross the highways except by running across the roads.

The responsibility of managing these roads is with the police but the police have got roads which do not cater to most of the stakeholders. There are multiple problems – there are no lights, no signages, no facilities to cross the roads. So villagers erect huge speed bumps on the highways near the roads which are legally not allowed. But they do this just to slow down the fast moving vehicles near their homes because they need to cross the highway and there is no other alternative than crossing the highway. These huge speed bumps are spine breakers and also damage vehicles. All these are symptoms of inappropriate planning and inappropriate construction of our highways and roads.

One of the aspects that is wrong with our highways is: bad engineering. For years we have been talking about identifying critical accident spots on the highways. Many road safety audits have been carried out by the government and the findings of these audits – inadequate infrastructure, lack of signage, no pedestrian crossing facilities, poor road markings – have been gathering dust because implementing the audit findings requires a significant investment and there has been no proper planning to do this. Today, there is so much technology available in the country for traffic management and safety – VMS, toll collection, etc., but somehow this is not being used on the highways. Then, we have equally bad management by the police and traffic department on the highways as they do not focus on safety. This is the reason why safety and traffic management on highways is bad.

Safety and traffic management during the construction of highways is even worse. We all know that when a highway or road is being widened, there is very little separation between the dug-up road, which is around two to three feet lower in depth, and the present level of the road. They are usually separated by a thin layer of tape which is not visible during the night. It is a miracle we don’t have more accidents and deaths on these highways under construction – this is entirely due to the skills of the drivers who avoid falling into these open ditches on the highways. What is needed is to act on the safety audits, to create better infrastructure and to make highways pedestrian-friendly. We need to introduce a paradigm shift on the enforcement we do on the highways – focus on saving lives rather than just collecting revenue. We need better equipped ambulances. We have a whole lot of Jeevan Raksha chowkies (booths) on the highways where there are no doctors and no paramedics. These are symbolic of our lack of concern for safety.