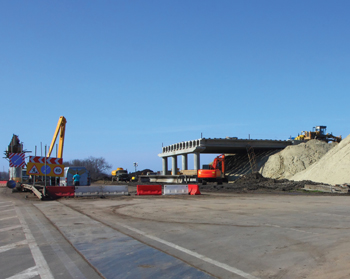 Bongirwar’s observation: We have learnt over the years by our mistakes. For example in 1997 during a flyover project, I was shocked when I was informed that building a safety barricade and other associated safety measures during construction would cost us around 30 lakh. I wondered why. Also, the quality of safety barricading was very poor back then. The first good barricading was introduced by DMRC with the 3 to 4mm solid steel plate, a standard which is followed even today. Basically, we had failed to understand how much safety and traffic management would cost during highway construction. Also, along with good roads and good infrastructure, signage and other things like driving habits have to change. You cannot expect to drive on a very good expressway with poor brakes. We are also not able to enforce lane discipline on any of our national highways – whether two lane or four lane, which is a major cause of accidents. Even the vehicles are not yet completely fit for high speed driving.

Road safety is more than a policing issue, it is a multi-sector problem which involves the four Es – Education (of all users such as motorist, commuters, pedestrians), Engineering (of both vehicles and roads), Enforcement and Emergency Response. Roads must be designed in such a way that they accommodate the mistakes of both drivers and pedestrians. Mistakes are inevitable, and while we should try to minimise the accidents, we have to be prepared for them too. Road design must be such that the damage from accidents is minimised for both – pedestrians and vehicles. Enforcement is very important because humans by nature tend to not want restrictions – they don’t want speed restrictions, they don’t want to wear helmets, etc. There is also a need for a good Emergency Response System to evacuate accident victims to a hospital during the critical golden hour. Safety needs are to be taken into consideration at the stage of preparing the contracts so that appropriate budget can be allotted towards them.

Before me, there was no Director of Road Safety in the Ministry. The entire focus was on transportation which includes motor vehicle legislation and taxation. The Ministry has now also recognised the importance of road safety and given me the responsibility. But there needs to be an institutional mechanism in place for which action is being taken by the Ministry. Road safety cannot be tackled by the Ministry or one person. National Highways come under the Centre while State Highways are looked after by the state governments. Similarly, transport departments in the states have jurisdiction over their respective states. We also have to take into account the public – its attitude towards road safety measures, the behaviour of drivers and driving skills among other things. Thus, all these stakeholders need to be taken aboard while formulating a policy on safety.

Safety during highway construction has to be taken up in a very scientific manner. It has to be built in right from the stage of planning of the project. The planner has to take into account things such as what stretches of the road will be affected, whether a part of the carriageway needs to be closed or the entire carriageway, whether a diversion and drainage work would be required or not and many such things. Further, road safety measures need to be included as tangible items in the construction contract which can be executed and paid for. Only then would these items be implemented. The people who execute the project at the planning stage should have a safety, health and environmental protection plan ready at that stage. During the construction, people have to be warned and instructed to take to the detours through delineators and markings. Appropriate enforcement measures have to be instituted. Appropriate buffer zones need to be maintained between the work area and the regular roads. All these are outlined in the safety manual for highway construction brought out by the Indian Roads Congress (IRC 2001–55). The NHAI, with the help of IIT Delhi, has developed its own manual based on these guidelines. It is a very flexible document, not dogmatic. This is important because dogmas will not work in safety.

Road safety measures need to be included as tangible items in the construction contract which can be executed and paid for. Only then would these items be implemented. — Rajeev Lochan

Safety is thought about as being nobody’s baby – some say it is the police’s baby, some say the engineers’ baby, the Centre feels it is the States’ responsibility and the states feel it is the Centre’s responsibility and so on. To address this problem, nodal officers have been appointed. Under the National Highways Land and Traffic Control Act 2002, a highway administration has been set up. So at least on the national level, the national highways safety issues will be taken up by these nodal officers. Under the statute, these officers have penal powers to close highways and order diversions.

Road safety audit is also an issue which needs to be addressed. We have not had many audits because of lack of qualified safety auditors. Plus, the recommendations of whatever audits have been done haven’t been implemented because the provision for their implementation was not provided for in the contracts. These things should be incorporated in the contract so that appropriate changes can be made. A contract is framed in a particular manner but there should be a provision to allow for changes when such exigencies arise – to put in new items, fix new rates if necessary and order the changes to be made, wherever required.

Bongirwar’s observation: Road safety has now been incorporated into documents such as the IRC and NHAI manuals. In the new concession agreements, there is a provision that the concessionaires will not get a completion certificate unless the prescribed safety audits are carried out and the shortcomings pointed out by the audit rectified.

The problem is that there are no footpaths on national highways: Satyendra Garg

Problems arise at both the times – when national highways are being constructed and even after they are constructed. In Delhi, we have been able to reduce accidents substantially for three years in a row. Even though accident rates nationwide are going up every year, I feel road safety can be much better if we make efforts to improve it.

Some of the factors which have a bearing on the roads are not managed by the police but are handled by other agencies such as the road infrastructure companies and transport department of the government. But whatever can be done to improve road safety can be done.

Delhi has six national highways covering about 80kilometers of area. Virtually, all cities in the country are connected to Delhi and thousands of vehicles come in it daily, including those which pass through in transit. This causes many unpleasant consequences including accidents. Many drivers, driving without knowing their way around, cause accidents – particularly at night. It is often said that national highways are a pain when under construction. The reason is that the NH1 (GT Karnal Highway) took ten years to complete, and in the process caused traffic jams, pollution and many problems for the city and its road users. Then, when the highway was completed, the accident rate shot up, causing more pain. It was completed in late 2010, and the figures for 2011 show that the accident rate had shot up by 60%. This is caused by the way the highways are constructed. E.g. on both sides of NH1, there are residential areas and people have to cross over to the other side, but I found that the NHAI’s DPR for NH1 had no provision for pedestrian crossovers. This was very shocking – how could a national highway which passes through a major city, be constructed without pedestrian crossovers? NH1 is an elevated road and has big service roads on both the sides. So, crossing across to the other side of NH1 is a big effort. First, you have to cross over three lanes at a lower level, climb up and cross over six to eight lanes, then run, climb down and again cross three lanes. If you are lucky, you will be successful or else there is a big chance you will be killed.