TrafficInfraTech magazine organised a roundtable conference – “Millennium Development Goals: Indian Perspective of ‘a decade of action for road safety’ ” – on the first day of the TrafficInfraTech Expo to discuss the Indian perspective and the measures to be implemented for road safety. Chaired by Rohit Baluja, President, Institute of Road Traffic Education (IRTE), the conference looked at the need to think and act holistically by learning and sharing of knowledge. Above all, it discussed the necessity of active intervention by the government – both for making policies and for the implementation of those policies.

Figures reveal 1.3 million global fatalities and 1127000 deaths in road accidents in India every year. In India, we have no political or bureaucratic commitment despite the rise in figures by 5 to 6% every year. I seriously feel that along with the number of people dying on the roads, the 1.6 million people who are getting seriously injured in road accidents also should worry us. 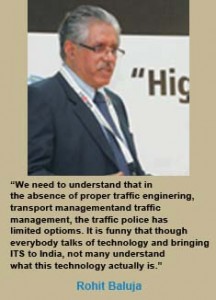 It is tragic to come to hospitals since there is always a scarcity of beds. The need of the hour is increasing the number of beds and immediate handling of patients by qualified staff rather than curtailing of accidents in order to do away with the need of building more medical facilities. Almost 25% of the accidents on state highways and 28% on National Highways take the figure to 53 % fatalities on highways. Twenty three mega cities actually handle only 9.7% of the fatalities but again the problem worsens the most in developing states like Andhra Pradesh (killing 13,700 people), Maharashtra (12,600), Tamil Nadu (12,000), Uttar Pradesh (12,500) and Karnataka (8,700).

We also need to look at the ill-use of hoardings by politicians. The hoardings must be used to convey messages like, ‘Look, how many people we are killing’. Serious injuries account for 16 times more than the road fatalities while they are recorded only four times. I sincerely feel that road safety investments a myth. They are only road safety campaigns and road safety weeks, banners and posters and newspaper advertisements. We must go beyond the big headlines in newspapers that just say “Don’t cross zebra line” or “wear a helmet” on road safety weeks as this isn’t road safety investment.

I feel embarrassed when even smaller countries talk of the various measures they have taken in road safety and traffic management in the United Nations where I represent India before 164 countries. I just have to bend down under the table and say, ‘Sorry, I have nothing to say’. Be it Mumbai or Delhi, no city can boast of traffic engineering in its true sense as there is chaos everywhere. In fact, 80% of the road signages and road markings that were put up in Delhi during the Commonwealth Games were wrong. Even half of our traffic signals are wrong. These signages, stop signs are absolutely against the traffic management principles, zebra crossings putting near the signals are against the principles and thick white lines going across the roads are wrong but not many understand this.

The lack of response from Public Works Departments (PWD) and authorities is frustrating. When there are no Standard Operating Procedures in place for construction of highways, what can the police do? The wrong designs of roads and highways are responsible for the accidents and not the drivers. Which state has highway patrol system, where do we enforce the systems on highways? The result is moving violations, zig-zag driving, etc.

Legislation and Politicians: It is important to build systems as all types of violations are on the rise. Our legislation does not define a mobile phone and the places it can be used at, or who should use seat belts (“Can a four-year-old child wear a seat belt?”) or what must be done with the helmets, or who can sit on a two-wheeler, or the way driving training schools get away with getting licenses without following proper legal procedure, etc. Licenses are sold in India not because people want bribe but because they are not trained about proper procedures since we neither have the systems nor the tools for the same. I remember that suddenly one day Delhi government decided that women riders don’t need to wear helmets. Why? Is it religion? Or we don’t bother about women? Or women have stronger heads? We need to answer these questions.

Scientific Investigation Missing: In Delhi, 146 million traffic violations are committed on the roads every single day, but the traffic police records only 8000. Out of 1,30,000 deaths, not more than 10 cases are scientifically investigated. This happens because there is no teaching of scientific investigation and scientific reconstruction. And so if we don’t know the causes and consequences of action, how do we actually bring about remedial measures? Once an accident took place in Andhra Pradesh and we saw seven people die before our eyes. We lifted them put them in the van and wanted to carry out investigation but the inspecting officer told my team that we had to clear the highway first. This meant we could not carry out scientific investigations. So road safety is not a stand-alone phenomenon. Roads are unsafe because of wrong and non-standard traffic engineering and because we have a problem with crash investigation and traffic management. We have a deficiency in driver training and legislation. We can only bring safe roads if all these things are plugged and brought in together under one programme.

In the decade of action we want the governments to specify what they would do in the next 10 years. The Government of India claims it will bring down fatalities from 120000 to 60000 by 2012 but in reality the fatalities are on the rise. It needs to specify how it will decrease the accidents, reduce crashes and each way and programme it intends to bring into practice.

Research is half-baked: Our research organisations aren’t aware of the latest happenings their research is limited to CPR ie Cut, Paste and Research. When I go to police departments, I am often asked what equipment needs to be installed. My consultant advises me ITSand other things. But then, it needs to be researched whether these things will work or not. The situation now is that Delhi will spend 100 crores, and since we don’t talk to each other, Uttar Pradesh will spend another 100 crores. There is no research base under which the entire work can be done. I know seven organisations in the country which are actually doing this work. This is not right. So we need to build a political system to help police departments to get into research and use the right research programmes. We need to build driver capacities, we need to have driver training tools and systems of driver training. We need traffic engineering.

If laws, rules and procedures have to be changed, they should be changed, The Motor Vehicle Act was amended in 1988. Today 22 years later, we are at the same act and same penalties. We can make lost time and missed opportunities provided we learn to move fast. We need to think holistically; we need to learn, share and resolve this problem together.

Safety is not a single aspect issue, it is a multi aspect issue and to make a difference, many stakeholders have to be taken along. 1.4 million deaths on roads taking place every year are bound to increase to 2.1 million deaths by 2030. Tremendous efforts are being put in on the international level to set a certain agenda for the next ten years and give some direction towards achieving that.

Vehicle vs fatality: An increase in vehicles doesn’t necessarily mean increase in fatality rates. In spite of increasing vehicle ownership, some developed countries have been able to bring down the fatality rate whereas the developing countries, particularly China and India, are not able to achieve this.

What is worrisome is that fatality rate per registered vehicle is on the rise. That compounds the problem. Certain decisions need to be taken on the policy level to see how vehicle proliferation needs to be regulated over time to create a safe environment. As compared with two times in population, our vehicles have increased by almost 15 but our safety records are still very poor.

In 1970, we had a maximum of 1000 fatal accidents and now the number is 1.2 lakh. The increase is 5% per year. There is also a regional issue involved along with the national issue in road safety as some states are more accident prone while some aren’t. Certain pockets of the countries are really exhibiting high accident rate. So, our policy also needs to be region specific because until you address the regional and the cultural dimensions into your policy, you won’t be able to achieve the kind of target which we are referring to.

Signage system also needs proper attention as most of the signages are poorly handled and are incorrect. Wrong placing of zebra crossings, poor road geometrics (because of the heterogeneity of the level of capacity across the country), human behaviour, etc are issues that need to be taken into consideration. Some issues have to be addressed at the education level itself. We have issues of safety, regulations, trauma care, public apathy and also resistance towards the issues of road safety.

Mission driven objectives: Though institutes are coming up and awareness is beginning to be created, a lot needs to be done. The objective of bringing about a change has to be mission driven of really working towards a policy in a highly fragmented sector. The policy is developed by the Central Government, – by the Ministry of Road Transport and Highway (MORTH) but how it gets translated into action at the city level nobody decides, or knows. The problem gets aggravated by the fact that there is no mechanism to monitor that translation. The accident reporting needs a proper system.