Basic information collection system: I am part of one of the sub groups of Indian Roads Congress and we are trying to find ways of revising the basic information collection system. The fact is that the person responsible for collecting information is not really capable of doing so scientifically. Complexities do not make it a very homogenous kind of environment where you make a system and it gets translated across the spectrum of the country. The police organisations don’t get involved quite often because it faces compulsions of its own ability to handle the situation and its work culture. Severe lack of coordination among the various stake holders like traffic police, road department, MORTH, NGOs, etc aggravates the problem.

But that doesn’t mean we must be pessimistic. A few new global projects are coming up that have certain design principles built into safety like Vision Zero in Sweden and Belgium Road Safety Fund.

What is important is that we draw lessons from these but do not fix our targets on these case studies. We have to be realistic in setting targets. The eight millennium goals do not talk about safety. They talk of hunger, education, empowerment, sustainability, mortality reduction, maternal health, HIV, environmental sustainability and global partnership for development. None of these has safety as an important objective. This is where we need to take a call how safety can be built into these kinds of goals.

Global road safety has already been set up and it has fixed a target to reduce accidents by 2020. It is requesting the member countries to chalk out an action plan and this action plan probably would need elements of planning, financing, design, and passion about a project. All this needs to be built into the agenda.

What would be the ingredients of a successful road safety policy? Political commitment is very important. We need to have clear cut targets and strategies which become ambitious at times; there should be budgetary allocations and these need to be defined nicely. We need a conducive institutional set up, a strong legal and enforcement machinery and finally, monitoring & evaluation. So, if our actions could be evolved around such commitments as to how they can take place, then we might be addressing some of the issues of safety improvement.

We need to set up internal best practices within our country to find out what type of interaction would lead to how much reduction in accidents. Otherwise, it would only remain a lip service. Some pilot studies may be initiated on certain inter-city and urban corridors and see the effect of an intervention. To set a realistic target, that intervention could be expanded on a national level. Target setting is the trickier part and since we need to set a target anyway, let that target be practical and not overambitious.

We need to strengthen the architecture for road safety which is very important. This will largely involve design and planning. For funding purposes, the practices followed are not the best as we don’t have norms on how much funding would be needed to achieve a certain target. There is no bench mark but we must decide whether per capita funding would be needed or per facility funding. Funding norms too need to be worked out. Increasing human capacity would be very important because until and unless you do capacity augmentation, you are not going to get a ground result.

Institutes like IRTE and IIT need to enhance their capacity training programmes and services. This probably would be the objective to service the kind of goal. To carry out a desirable road safety intervention, we need an agency which is funded. Identifying such an agency and having a national planning strategy are important for it. We can’t do much about the brown field development but we can for the green field development. The new cities which are going to come should be safe.

Our safety features of vehicles, enforcement laws and Motor Vehicle Act are outdated. They need to be revised. Also, post crash care for victims needs to be looked into. We need to accept the fact that fatality is not only because of poor design, it’s also because of whether the victim was taken to hospital in time, i.e., within the ‘golden hour’. The number of trauma facilities has to be considered while deciding our policies.

The data we get from the police may not be true. Hence, we cannot build our targets on that data. That means: We need to carry out Safety audits. It is now being built in, in all the new projects on highways but we cannot be sure if we relate safety audit to the maintenance of projects which are already constructed. It could be decided that maintenance grants will not be given for a facility unless there is a safety audit attached to it. Strengthening safety for vulnerable road user requires good governance, tools and knowledge based approach and a comprehensive road safety policy.

There is a government policy. Do we have a city policy also? There are no guidelines on how the national policy should get translated into city policy. There is nothing that a planner or administrator can have as a target in front of him and finally embrace road safety as a core value in the society.

We, Indians, are not safety conscious. People sit on the roof of the train and get electrocuted or crushed. Indian roads have 90 types of traffic which includes pedestrians, bicyclists, bullock carts and cattle on the road which neither we, nor our municipalities have been able to curb anywhere in our country. That is something that has to change.

It is very difficult to get true statistics about anything in India but if you have to believe the United States of America, 98,000 lives are lost each year because of medical errors and that is the reason WHO has initiated safety issue in the hospitals. But in India, we have no figures.

Now as regards traffic fatalities, statistics are important. We need to see where we stand when it comes to injuries and the fact is: we are lost in this area. ‘Can anyone remember how many persons died in Tsunami when it hit Indian coast within India’? The answers I get range from 10,000 to 70,000 lives but the average figure quoted is about 30,000 lives. How many persons are killed each year on our roads? An under estimated figure reveals it as 1,18,500. In 2008, 19000 lives were lost. We don’t have the figures yet for 2009 and 2010 – it will still take some time. And majority of these who are killed on our roads are young – below 40 years of age. Majority of them 88 to 90% – are males and productive bread winners for their families. You can imagine the consequences when so many young, productive bread earners of their families either die or are disabled for life. Against every death, there are 10 to 20 times the seriously injured persons, and 50 to 60 times less severely injured persons, which also include morbidity on a big scale. We underestimate the minor injuries but they also lead tremendously to morbidity. Injury is the most common cause of physician contact, not cancer, heart disease, diabetes or any other disease.

Prevention is less expensive than care and the disability it leads to. So it’s an enormous task to tackle for India but with so much awakening and so much being done by various agencies, I’m sure we will definitely be achieving something in the next 10 to 20 years. It takes time. But what I’m pleading here is to enforce the helmet law all across India. The problem is that it is met with stiff resistance from people wherever it is enforced with a few even going to court.

But now with the Supreme Court judgment and High Court of Delhi’s judgment in 2009 making helmet sale mandatory with two wheelers, things look a little better. Though some people went to court saying it would lead to monopoly, the SC didn’t agree and emphasised on the helmet sale along with that of two-wheelers. So, when SC says, it becomes a law. And that law needs to be enforced. People might say it is an encroachment on their personal freedom but then, this subject has been dealt with even by United States. Somebody went to court and the apex court said: “No gentleman, it’s not your life we are bothered about, it’s the money which goes into the care that we are concerned with and we will not allow you to have that because ultimately, when you are head injured who cares for you?” So, we have to be very conscious of that and I’m sure with all efforts, we will be able to achieve something.

We need to have a look at the gravity of the issue of road safety. 23% of Delhi is covered by roads. If you join all the vehicles, they will cover 11% of Delhi’s area. So, the number of vehicles and the number of people using vehicles are on the rise. Apart from the heterogeneous type of movement on the roads, some people also use roads to dry or wash clothes, or even as a gathering area. We, as citizens, planners, engineers and members of society have to contribute constructively to check this strength. 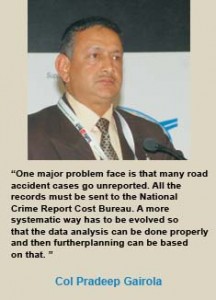 Highest Casualties: Though going by the number of vehicles we are not even 20% of the number of world vehicles but casualty-wise we are the highest – even surpassing China. Though China is ahead in population and the number of vehicles, its road discipline is much better and casualties, far less than India. When you assess the cost an individual has to pay to society or society has to pay to individual to look after him if he dies or is injured in road accident, by a very conservative estimate it comes to `5 to 6 lakh. Here I’m not taking into consideration the laws, I’m just talking about his medical expenditure, his output which was supposed to be given to the society, his insurance, the police cost, etc. I’m not even adding the cost of damage to the vehicle or the expenses incurred by the delay caused by the movement of the traffic. If you add all this, it comes to about र10 to 12 lakh per individual. Add to it the cost, if the injuries incurred are severe. So on a daily basis, the government or the nation has to pay so much for such casualties.

So now the time has come to give a serious thought to the right policies – safe audit of the roads, to the planners, to the designers, etc. Then it comes to the execution part because right now, whenever some casualty or accident takes place, we straight away look for the police or try to find who is at fault. Police comes at the enforcement part of it which is much later.

While working at a policy at the national level, the designing part also needs to be looked into, as a faulty design will lead to accidents. Our motive should be that roads become absolutely accident free when it comes to planning and designing. One issue is that there is some variation in the definition of fatality itself. Some countries take fatality due to road accidents as somebody who dies even after 30 days of a road accident, some countries take it only within three days of road accident. So at the international level also, we need to arrive at a uniform measuring method.