The main problem in our system, like in many other fields, is that Central Government has delegated almost all the responsibilities to the State Governments – District Administration, Policing System, Judicial System, health system, CMO, hospitals, education system, district inspector of schools and various schools, etc. All the burden of money and economics has been left on the State Governments.

State governments have limited resources. Major resources/incomes come to the Central Government. We expect that people’s health, the roads, the traffic system and policing should all be very good. But what system has been developed in the country to create traffic awareness among the people? Are there any schools for it? When a person from Rajasthan or Meerut with bullock cart or cattle cart comes on the road to Delhi, he doesn’t know the traffic rules. Have we made any provision for him to know the rules?

A point to ponder is that our thinking is broken into parts. Like doctors are over burdened with the problem of road accident victims & trauma care and engineers are worried about construction of roads. What is important is that we talk holistically and not in parts. A better picture would emerge then which will lead to better solutions. Earlier we used to have a lot of head-on collisions but the construction agencies did not construct wider roads because rules said that they could do so only after constructing a seven meter wide road. They would not put signs or a dividing line in the middle of the road and if the trucks or buses collided head on in the middle of the road, it wasn’t their responsibility. The responsibility lies with someone else traffic police, medical fraternity etc. Our political hierarchy is so busy with its own political problems, it doesn’t have much time for these pressing issues. This is also the problem.

So now, the important job of all the stakeholders in the system is – they should raise a demand with one voice that road must have dividers. We know speeding vehicles often meet with accidents but wherever side walls have been constructed on the roads, accidents have come down. So, why can’t the Central Government take a decision that every road will be constructed with a side wall and entry & exit points will be given at pre-decided places? We have also not taken a decision on whether slow moving traffic like bullock carts should be allowed on roads in the peak time traffic situation! We face this problem in Meerut, Ghaziabad, Noida, etc. We are trying that they should be stopped at least in peak hours; people oppose it for lack of awareness.

Only 3,500 traffic cops for 20 crore people: In Uttar Pradesh, we have only 3500 men for the entire state for Traffic Police. And we expect that all the controlling in the entire state must be taken care of by these traffic cops! A friend from AIIMS asked me why couldn’t we make it compulsory for all the riders to put on helmet. I think for a 20 crore population of Uttar Pradesh, there should be enough men to check who is wearing a helmet or not, then challan the defaulters, prosecute them and collect fines.

Task not defined properly: My men used to believe that the duty of the traffic police is to stand on crossings and show their hand to stop the traffic and then show it again to let it pass when the time was over for the other side. That’s it. It is an irony that our system does not clarify who is responsible for stopping accidents and who is responsible to see that people do not die in road accidents. The Central Government sent some ambulances without drivers to us saying that drivers had to be arranged by us. There was a one-time grant for the ambulances, and they said we will foot the bill of repairs and oil. This type of approach will not work.

Licence to kill: The Road Transport Authority issues licenses without carrying out proper tests and some agents help you get licenses for र1000 or 2000 if you give them your photograph and high school certificate! I have got only 12 persons for the entire district for this task. We have not decided how we will ensure that only persons who have learnt driving can take driving license. Where is the driving license system? Truck cleaners, while washing the tires of the trucks, gradually start driving the truck and then procure a license and become truck drivers. I say these are licences to kill others.

Lack of motor driving schools: How many motor driving licenses schools do we have? In Uttar Pradesh, there is a need of about 5000 driving schools. There are hardly even 100 schools because agents can get you licences while the licensing authority neither has the time nor the inclination to stop them.

Agency to teach driving and issue licences: Daily 2500 driving licenses are being issued but there is no organised system to teach driving. My question is: Why can’t we give the authority of issuing licences to any such separate agency which can teach people how to drive? We have lakhs of primary and secondary schools. Why can’t we take decision that in all schools and colleges traffic education will be incorporated in our syllabus of the intermediate of the high school? In UP, we have succeeded in bringing it up to the ninth standard. We are trying to take it further. Such education will help tremendously. The UP licence issuing authority does not have even one software of driving because it costs 50 lakhs! This means we have not been given even one software by which we can take the test of the person who applies for driving even on computer, what to say on the field.

Decision makers have their own priority. But spending is not available for this social priority. They forget that even they can die in road accidents. Many senior ministers and senior officers have been victims of road accidents.

Outdated figures: Most of the figures we receive on road accidents are outdated. I was surprised to know that in UP, 15000 people have been killed in 2010 while the figure says only 12000. Similarly the deaths in road accident on national level have crossed 1,50,000.

Computerised challan systems: We used to have problems while drawing challans. Now, we have succeeded in introducing a computerized automatic challan system in eight major cities of UP. We will cover eight more cities soon. There is one good thing here. We have succeeded in persuading the UP Government that about 3/4th of the revenue collected from the challans can be retained by the traffic police for improvement of traffic conditions.

Vehicle designs and speed limits: Similarly we should think of the vehicle designs too. Have we applied our mind as to why do most of the deaths of young two-wheeler riders happening only on particular brands of two wheelers? Should we not have rules that say that vehicles that give you speed option of more than 100kms per hour will not be allowed on Indian roads? Today, vehicles allow you to accelerate up to 240kms per hour! It is dangerous not just for the rider but also for an innocent person walking on the road. Why allow cars with thin steel bodies which cannot provide safety to passengers? So why are faulty designs of vehicles allowed in the first place? Why can’t we think of some safety guards for the vehicles? Of course, some measures are being taken by some car companies in this regard now.

Outdated legal system: Our legal systems are so outdated that there still is a र100 fine for a traffic offence in the court. Can you imagine that we challan about 26 lakh people every year with such limited manpower but they get away by paying such a small amount of challan? You cannot kill somebody and get away with it be calling it negligence! The punishment must be enhanced and publicised well for all kind of traffic offences so that it acts as a deterrent to others. You can’t get away with murder! 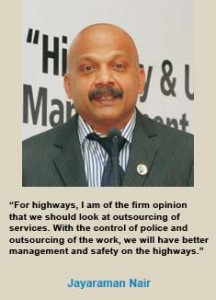 Road accidents and injuries affect us all. We all know that safety is important, we all know that lives have to be saved and that injured people are not going to help our economy but there is one important issue – as Dr. Gupta pointed out if political commitment and political will to do something are lacking, all the efforts of social organisations, institutions and us will come to a zero. Licensing is a very important aspect. It’s not just about licences being given to people, but also for the vehicles. We often see old lorries plying on our roads which don’t even have proper brakes. We are told that when vehicles are taken inside for checking , the tires are changed and then they are passed in the test. They come out to kill more people. Controlling all this is very difficult aspect. Traffic police are doing a fantastic job. But when there are no proper roads and no system, what will they manage? For highways, I am of the firm opinion that we should look at outsourcing of services. With the control of police and outsourcing of the work, we will have better management and safety on the highways.