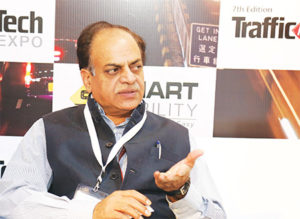 As far as the Ministry of Road Transport and Highways is concerned the sweep of it’s mandate is very wide. It was exactly one year back on October 24, 2017, that a plan was put in place to develop close to 35,000kms of National Highways as part of Bharatmala in addition to the roads which were taken up under various other programmes. During last four years, 28,000kms length of national highways have been constructed. Last year we touched about 9,800kms and I am sure given that pace that is continuing so far this year, we should be crossing above 12,000kms. The total length of national highways in 2014 was 91,000kms which today is 1,29,000kms. But as a part of the Bharatmala initiative, there is greater focus not only on taking up isolated roads but also taking up corridors and that is what makes or brings much greater value on the whole concept of the scheme of National Highways.

We have already identified close to about 10,000kms of greenfield highways which reduce the existing distance anywhere between 15 to 18 percent. Land acquisition for the national highways always remains a challenge but fortunately so far in three or four projects where we have started this process, we have come across least resistance in terms of the land acquisition. We try that the alignments are so finalised that those statutory clearances do not come in the way.

Apart from the green field corridors that I have just spoken about, we have taken another approach. About 90% of projects taken for execution through NHAI or NHIDCL or through the state PWDs are brown-filed project. Existing roads, state highways or major district roads have also been taken up. The existing National Highways are planned to be developed as NHs with different sets of configurations depending on the traffic.

The moment we do development on an existing road, we face four major challenges. The additional land for right of way that one acquires since it is situated on an existing road, is three to four times more expensive as compared to what would be acquired for a greenfield alignment. Secondly, you end up incurring huge expenditure, time and effort on shifting of utilities which are already laid and felling of trees which have been planted along those existing roads.

Fourthly, on many locations, some structures need to be demolished in order to have a clean working front. All these four factors not only become time consuming, difficult to overcome but also significantly add to the costs. So, we have been able now to partially address the challenges with a decision that any brownfield project where it is proposed to be developed as an NH, we would acquire additional right of way only one side of the existing road. This can reduce 50% the cost. In some roads where we have adopted this, we have found it much more useful in terms of expediting the processes and damage control and also in terms of execution of the projects because having acquired it on one side, particularly for divided carriageway, the execution of the project is much faster, seamless, without any disturbance to the running traffic under any circumstances.

Bharatmala phase – I which is 24,800kms, comprises of about 9000kms of economic corridors, about another 5000kms of inter routes and feeder routes, about 5000kms of the national corridor improvements, that is Golden Quadrilateral as well as North- South-East-West corridors and close to 2000kms of roads for connectivity of ports or coastal roads. Now that being the combination, we already have a plan ahead of us till 2022.

The construction of road leads on to the next challenge and that is Road Safety. The Expo reinforces that in the next four to five years road safety is going to remain the focus, IT is going to play a major role in terms of road safety, intelligent transport management systems have to be in place, the accident rate has to be reduced.

The second part of the Ministry’s plan addresses the issues related to road safety and the behaviour of vehicles on the roads. Apart from road engineering, it talks of the engineering of the automobile sector and the kind of safety devices needed in the vehicles. The challenge is rather too huge in the sense that we have been seeing a growth of about 15% year-onyear in the automobile sector. According to our Minister Nitin Gadkari, if the automobile growth continues at the present pace, then, we need to construct an additional lane every three years.