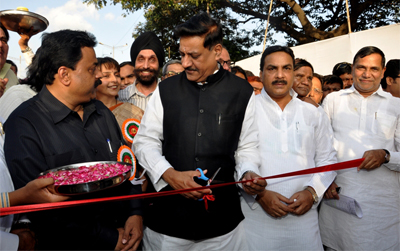 The Milan Subway Rail Overbridge, built by the MMRDA, was opened to the public by the Maharashtra Chief Minister Prithviraj Chavan in Vile Parle, north-western Mumbai. Speaking on the occasion, the Chief Minister said that the overbridge would give commuters substantial relief to the problem of flooding of the Milan subway rail overbridge, which occurs every monsoon. One of the biggest challenges in constructing the 83 crore 700m ROB was the construction of the 61 metre long direct span weighing 900 tonnes, and erecting it across the railway tracks. About 300 people affected by the project, including those who owned commercial shops and residential houses had to be rehabilitated. Many of them have been rehabilitated in the areas nearby the ROB, while the remaining eventually will be. Further, five religious structures also had to be relocated. More than 35,000 vehicles are expected to use the ROB every day. UPS Madan, the MMRDA Commissioner, said that this was the first time in the country such a long rail overbridge had been built. It was felt by many that the alignment of the bridge was not optimal but given the circumstances, this was the best that could be done. For example, due to its proximity to the airport the structure could not be built too high. Krishna Hegde, the local MLA, proposed an underpass at Santa Cruz connecting the Milan Subway to take motorists towards the South-bound lane of the Western Express Highway. Sunil Prabhu, the Mumbai mayor and the local MP, Priya Dutt, said that rehabilitation of the affected people would be complete when they would be resettled near their original localities.

Previous: NHAI approaches PMO to save discarded road projects
Next: New Delhi commuters to be tested for alcohol