During the last two decades highway engineers have become increasingly aware of the following situations for which upgraded bituminous binders are needed:

During the early and mid 1980s, the use of polymer modified bitumen (PMB) proliferated in the US as newer polymers were developed; European binder and mix technologies were introduced; rutting started to become a major problem due to heavy loads and high tyre pressures; and the concept of lower life cycle costs became better understood.

Later, the American Society for Testing and Materials (ASTM) followed suit and developed specification individually for each class of modified bitumen during the 1995-1997 period.

There was a need for developing performance based specifications for all road paving bitumen binders which should be blind to the type of modification or refining process. A 50-million dollar, 5-year Strategic Highway Research Programme (SHRP) was undertaken from 1987 to 1992 to develop a performance based grading system for bitumen. The Superpave performance grade (PG) bitumen is based on climate and varies accordingly.

The use of modified bitumen increased significantly after the PG grading system was adopted in the US because some PG grades with a wide range of maximum and minimum temperatures cannot be made with unmodified (neat) bitumen. PG 64-22 (equivalent to India’s VG-20 bitumen grade) is the most commonly used paving bitumen in large parts of the US. However, this grade is “bumped up” two grades for use on heavily trafficked roads. That is, PG 64-22 is bumped up to PG 76-22 which can be produced only with modification. PG 76-22 is also suited for use on India’s heavily trafficked roads.

The term “polymer” simply refers to a very large molecule made by chemically reacting many (poly) smaller molecules (monomers) with one another either in long chains or clusters. The sequence and chemical structure of the monomers from which it is made determines the physical properties of a specific polymer.

Polymers most often used in modifying bitumen can be grouped in two general categories: elastomers and plastomers. As the name implies, elastomers can be stretched like a rubber band and recover their shape when the stretching force is released. Therefore, elastomers have the ability to resist permanent deformation (rutting). Several different types of elastomeric polymers are used for modifying bitumen. Examples are: styrene-butadiene-styrene (SBS) block copolymer; styrene-butadiene rubber; styrene isoprene styrene (SIS); and ethylene terpolymer (ETP).

Plastomers form tough, rigid, three dimensional networks within the bitumen. These plastomers give high initial strength to the bitumen to resist heavy loads. However, they have lower strain tolerance and may crack at high strains. Examples of plastomers for modifying bitumen are: ethylene vinyl acetate (EVA); ethylene butyl acrylate (EBA); polyethylene; and ethylene-methyl-acrylate (EMA) copolymer.

Most highway agencies in the US primarily specify and use elastomers; plastomers are hardly used.

During the time period when highway engineers in the US were trying to understand complex polymer modified bitumen (PMB) systems as previously discussed, came another far more complex and least understood modified binder: crumb rubber modified bitumen (CRMB). In the US, CRMB is simply called Asphalt-Rubber (AR) binder. Rubber from discarded tyres is ground to a particulate or crumb prior to adding it to bitumen to produce CRMB.

The use of AR or CRMB was sporadic in the US until 1991 when the US Congress mandated its use in all 50 states through central legislation. Since most of the states did not have any experience in using CRMB, the US Federal Highway Administration (FHWA) undertook an ambitious practical training programme for state highway engineers. The training manual co-written by this author emphasised the importance of stringent quality control requirements right from the production of the CRMB at, or in close proximity of, hot mix asphalt plant; transportation of CRMB from production site to asphalt mix plant; storage of CRMB in contractor’s plant; and final testing of CRMB just prior to adding it to aggregates in asphalt plant pug mill or drum.

During the mandate, all 50 states in the US used CRMB in numerous bituminous paving projects from 1991 until 1995 when the mandate was repealed. Thereafter, most states discontinued the routine use of CRMB in bituminous paving mixtures. There are three primary reasons for this.

First, the use of CRMB requires development of a statewide infrastructure consisting of strategically placed on-site blending units near hot mix plants. This is required because (a) crumb rubber tends to separate and settle down in the bitumen and (b) crumb rubber is prone to degradation (devulcanisation and depolymerisation) and its quality can start to deteriorate as early as 6 hours after production.

Second, many states such as Arkansas, Georgia, Kansas, Minnesota, Nevada, Washington, and Wisconsin have reported mixed performance of bituminous pavements constructed with CRMB and the cost effectiveness of CRMB was found to be none to marginal.

Use of Modified Binders in India

Fortunately, most progressive contractors are not using the downgraded 2010 version of IRC:SP:53; they would rather use PMB with elastomer which meet the enhanced elastic recovery requirement as in 1999 version of the IRC:SP:53.

Recommendations for use of modified binders in India 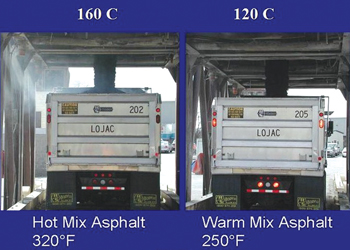 It has been well established that modified binders made with different polymers (elastomers and plastomers) and different modifiers (crumb rubber and natural rubber) cannot have a common specification. Each type must have its own separate specification similar to AASHTO, ASTM, IRC:SP:53-1999, or IS: 15462. In case of a common specification like in IRC:SP:53-2010, the following consequences are expected: (a) lowering the requirements to the level where a weak modifier like crumb rubber can also qualify, would lower the performance standard for all modifiers; (b) suppliers of better and more expensive products will tend to downgrade the quality of their products so as to be more competitive pricewise if that is the criterion for decision making; and (c) lowering the quality will come in the way of producing still better products thus having a negative effect on further R&D activities.

The following recommendations are made for use of modified binders in India.

Based on the detailed recommendations made for use of modified bitumen binders in India in the preceding section, the following current imperatives have been identified:

(  Prof Prithvi Singh Kandhal is Associate Director Emeritus of the National Center for Asphalt Technology (NCAT) based at Auburn University, Alabama, U.S.A. He served as Chief Asphalt Engineer at the Pennsylvania Department of Transportation for 17 years ).