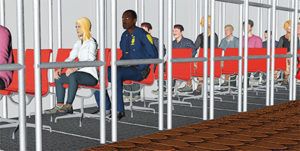 Beyond doubt, the prime problems of the day for all the cities are-pollution and traffic congestion. Cities are getting mired in traffic snarls. Dhaka based Abu Sayeed says that the concept of moving roads can give respite from traffic jams.

The main source of air pollution is fossil fuel used by automobiles. Added to that traffic jam has reached such an impasse that in a city like Dhaka everyday 1.2 million working hours are wasted being stuck on the roads—a waste of 300 Billion of taka. Possible that here are many cities, those have similar problems or more.

‘Moving Road’ is a unique project which offers advantages like:

a) Cities will be free from traffic jams.
b) the system is eco-friendly.
c) it will save fuel/ electricity.
d) annual outlays on transport can be pared down.
e) cost of implementation is low and this can be achieved by available technical know how.

Moving Road is neither an underground structure nor an over ground one which can be arranged in many layers like elevated express ways. It doesn’t need a lot of space. Rather it needs minimal space compared to existing systems. In conventional transportation system, vehicles and roads exist individually but Moving Road will move automatically. At the same time, it will serve all the facilities of traditional transportation system to the passengers.

The system can be laid over existing roads, in the middle, or, along either side. Irrespective of whether it is placed along the centre or the extremities, the Moving Road will be elevated to a height of 20 feet above ground level. Regular vehicles will move accordingly below the moving road and the existing road network will not be disturbed by this project. 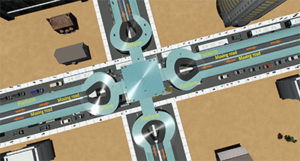 If it is built in the middle of the road. Two tracks, each six feet wide, moving in opposite directions make up the Moving Road system. On either side of these tracks, there will be two platforms, about eight feet wide. On each track above a pair of rail lines, will run plates admeasuring 72×30 inches.

Each plate will be fixed on the rail system and will be fitted with two chairs. If there is a crowd, users can even stand beside the seats. For wind proofing, fiber sheets may be attached to steel frames. The Moving Road will be covered with a roof. The extremities of the platforms on either side will be fenced with steel railings. If need be, some sections may be enclosed in acrylic sheets

Passengers will be able to access the platform of the Moving Road from the footpaths of the streets using a system of stairs or escalators. Ticket counters will be placed at points of entry. It will be better if access points for entering the Moving Road are provided at intervals of 200 meters along the footpaths. One in every three over bridges should have escalators to facilitate the movements of the aged, infirm or disabled. There will be over bridges connecting the Moving Roads on either side. This over bridge needs to be placed only 12 feet above the platform.

Irrespective of the length, whether five kilometers or 50 kilometers, the Moving Road will remain in continuous motion, like a vehicle. Speeds inside the city may reach between 20-60 km/ hr and in highway between 100-120 km/hr. The Moving Road will keep stopping for 5-10 seconds at intervals of 1-3 minutes. The travelling speeds and durations of stoppages of the Moving Roads may vary from city to city and place to place, depending upon local needs.

Street junctions hinder the flows of traffic. For ease of movement, flyovers are layered. In a two tier system, one Moving Road will over cross or overpass another. A single tier system will envisage the Moving Road taking a U-turn after reaching a junction. At junctions, Moving Roads will return in U-turns. But roads for vehicles can’t be u-turned because cars are essentially forward moving vehicles. Passengers will be able to alight at the point of u-turn and continue ahead on foot over the platform to get on the next Moving Road. This structure is impossible when using cars. Therefore flyover systems use multiple tier overpasses.

Disembarking from one bus or train to catch another is tedious for passengers, made worse during the monsoons. But passengers on the Moving Road need not suffer this trouble. The system city will be disconnected from each other, but the platforms will all be connected. Passengers will be able to change from one Moving Road to another by using the platform. There can be hundreds of routs in moving roads in a town but for the convenience of the passengers there would be facilities of easy movements from one platform to another under the same shed. Irrespective of flooding, the Moving Road will continue to move according to schedule. The project will ensure mobility. In many cities including Dhaka, the average speed of transportation has come down even below 10 kilometers per hour. The project will help it increase to 40 to 50 kilometers per hour. Since it will be run by electricity, airpollution will go down to near zero. The concept envisages parallel lanes in the same direction, including lanes for bicycles and also walking tracks. Elevated walkway and bicycle lane will be free of dust and pollution. 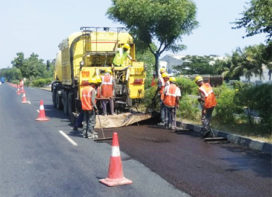