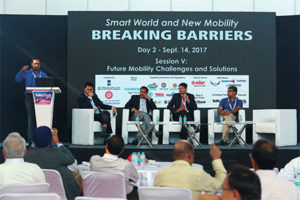 Opening the discussion M Ramsekhar, stated that the major problem with having a sort of an integrated approach to multimodality is turf battles. “We need to highlight the fact that institutional integration is not happening at all.”

It is important to look at multimodal integration from the perspective of endusers and not just the system or the agency that is designing. Whom it is for and how does it benefit? The different modes of mobility include walking, cycling, autorickshaws, taxis, buses, cars and two wheelers. Given that the forms are different, the travel patterns will also be different, so how do we integrate these?

“I would really like to highlight this metro policy that came up in 2017 recently which says there should be a comprehensive approach to planning for urban land use and transport infrastructure. A system approach should be applied in the planning of multimodal transport system in a city. We are at a very critical juncture. I think more than twelve or more cities are implementing metro systems but the biggest challenge is there is no last mile connectivity. If you have all elevated corridors and you are dropping people right on roads, how do you expect that metro usage, the ridership, will go up? Because it is a major safety issue. We are saying that I will just leave you outside the system, you take care of yourselves.” 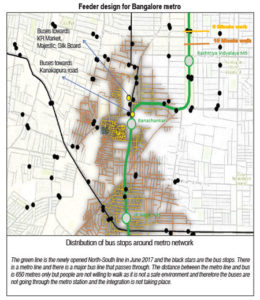 “WRI did some survey in two or three stations around and we figured out that fifty percent of the users are actually bus users and if there is no integration of feeder bus systems with the metro systems, it is going to be a disaster. Unfortunately, Bangalore is learning that lesson because of lack of coordination between two agencies has become a very major challenge. This is an interesting data says that 44% would be metro riders who are currently preferring alternative means of transport due to limited connectivity and it could be same in Hyderabad and or in Chennai and other cities. And when you are talking about elements we need to focus on pedestrians, feeder bus systems, autorickshaws and taxis and how do you ensure parking. These are the Tender SURE footpaths in Bangalore which have been really well done. So, we can have infrastructure like this and this is something that other cities should really replicate and implement for pedestrians.

“In Bhopal which has one of the first dedicated cycle tracks in India, the authorities launched a bike sharing system which is being integrated with BRTS and city bus services. It is completely a digital system involving automated bikes. Every five minutes a new rider is joining this bike sharing system and this is one example where things can be done really well. These are the dedicated cycle tracks. Under one of the stations, they have given dedicated terminal for buses which is also working out well.

“Many a time, we forget the fact that we have no space for cycling. We do not think of paratransit, be it rickshaws or e-rickshaws. These are all components of multimodality because that is what we are trying to emphasize besides bus-based public transportation system.”
–M Ramsekhar 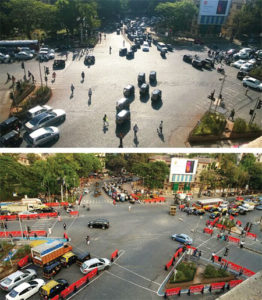 Another example is the Thane station (suburban), where you have dedicated bus terminals and autorickshaw lanes. WRI is also experimenting with improving the junctions near stations. Even though we have signals there is no significant, dedicated lanes for different modes. We did simple experiments in partnership with police in Mumbai, Bhubaneswar and are repeating the same thing in Kochi also. When we organize the spaces, the fast turning ‘left turns’, ‘U’ Turns, vehicles are a little more organised and space is available for pedestrians. There has been an intersection revival project in Hyderabad as well.

We need to consider feeder buses which are like 4 kilometres or 7 kilometres because they need to have quick turnaround. If a metro service frequency is every three or four minutes, we cannot have bus frequency at 15 minutes; at least the bus frequency needs to be five to six minutes. For this to happen one really needs to think of services taking into consideration economic viability because we know that many of the operators are into loss making.

Kochi Metro has launched the smart card an open-loop system adopted from the standard prescribed by the government. We have a lot of private developers who are coming up with several apps. By opening up the data and creating an open data policy, market can decide how many apps can be put in place. In Mexico and Chicago, the authorities opened up the data and what we saw was hundreds of apps were developed and people chose to use whatever they wanted to.