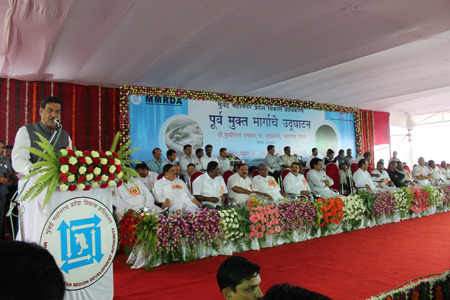 The Chief Minister of Maharashtra Prithviraj Chavan recently inaugurated the Eastern Freeway in Mumbai. The 17km freeway is one of the most important transportation infrastructures built by the Mumbai Metropolitan Region Development Authority (MMRDA). Chavan outlined the importance of the highway and said that it will connect South Mumbai to the north eastern suburbs of the city and provide motorists a fast and relatively traffic-free route, with 13.5km of the highway being completely signal-free. Motorists will be able travel from CST (Chathrapati Shivaji Terminus) to Chembur in north-eastern Mumbai in just 20 minutes, a distance which takes otherwise takes about 45 minutes to about an hour. This is the first highway in India which has tunnels in an urban area. About 25,000 vehicles are expected to use the freeway every day. Chavan added that the state government planned to commission transport infrastructure projects worth 5,000 crore this year and projects worth nearly 40,000 crore over the next few years. The Maharashtra Deputy Chief Minister Ajit Pawar said that the project which began in 2008 took five years to complete because of the challenges involved in its construction. One of the highlights of the freeway was that it was toll-free which would encourage more motorists to use it. But two-wheelers, three-wheelers and heavy vehicles are not being allowed on the freeway. Pawar, who also handles the state finance portfolio, assured all help from the government to complete the remaining construction work on the freeway. The MMRDA Commissioner UPS Madan said that acquiring land for the project was difficult as most land belonged to the Central government undertakings such as the Bombay Port Trust (BPT) and Customs but the cooperation from the central government helped. Another challenge was rehabilitating 5500 houses, out of which 300 were commercial settlements and 30 were religious structures. Local MLAs and MPs helped MMRDA with this. The project, which costs 1,260 crore, has been partly funded by the Jawaharlal Nehru National Urban Renewal Mission (JNNURM).