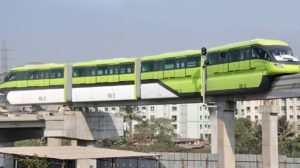 The Maharashtra Chief Minister Devendra Fadnavis flagged off the 11.28 km second phase of the Chembur-Wadala-Jacob Circle monorail network on Sunday. This is the country’s first monorail system which has been implemented by the Mumbai Metropolitan Region Development Authority (MMRDA).

Commissioned in Feb 2014, the 8.26km first phase was built and operated by a consortium of Larsen & Toubro and Malaysian firm Scomi Engineering. The monorail’s annual ridership is expected to increase from the current 4.5 lakh to 30 lakh.

Speaking at the event, the chief minister said there was a need to integrate transport systems including railways, monorail, metro, BEST and the proposed waterways. The civic-run Brihanmumbai Electric Supply and Transport undertaking should get more electric buses in its fleet to reduce pollution.