In Naya Raipur, as in other TOD projects, the density (people per hectare – pph) of development is greater near the BRTS bus stops and their immediate vicinity. This ensures that more people can live, work, shop, or go on other trips within the walking distance of a BRTS stop. In doing so, people drive less, use less fuel, save money and at the same time, this generates more revenue and ridership for BRTS. The density is progressively lesser, spreading outward from the centre of the BRTS. There are three zones around the transit station in a TOD project ? gateway zone, midway zone and transition zone. The gateway zone is the area immediately surrounding the transit station where passengers enter or leave transit vehicles. Transition zone is the area at the periphery of the TOD district boundary which abuts adjacent neighbourhoods while the midway zone is the area between a gateway zone and transition zone. In Naya Raipur, the gateway zone is between 0-50m from the BRTS stop, midway zone is between50 to 250m while the transition zone is between 250 to 500m. The gateway zone will give commuters access to inter-modal transport facilities, the midway zone will have the highest density development, the transit zone will have high density development and beyond that the density will start to decrease.

Another important feature of TOD is the intensity of mixed land use such as residential, commercial and retail. Mixed land use ensures that areas are activated and vibrant throughout the day. It ensures the safety that a well-used city street provides compared to a deserted street. It also maximises the utilisation of infrastructure like roads, street lights and transit facilities. Otherwise, say for example, if an area is exclusively commercial, it would become desolate and unsafe, and nobody would use these facilities after 6pm and all such investment would remain underutilised. Also, transit or public transport services cannot be run on a profitable basis if they cater to exclusively commercial areas since ridership would be poor during off peak hours and would generate only uni-directional trips.

The success of the Naya Raipur TOD depends not only upon the ability of the transit service to support development, but the degree to which it promotes an active and engaging street life.

Bankim Kalra and Ashish Ghate, Associates, IBI Group, the consultants for the project, say, ?The approach to concentrate development within the 400m (5-minute walking) distance of BRTS bus stop is termed as Station Area Planning. The idea behind the station area planning approach instead of the current sector- based approach is to capture development on both sides of the BRTS route. This to encourage ground-level activity and land uses along main streets, key intersections, station areas and parking structures to accommodate retail and other ?active uses? with no boundary walls at the ground plane. This will ensure a high-quality pedestrian environment. Strategies that we are currently testing to achieve these objectives include: increasing densities, FARs (Floor area Ratio) and heights in strategic locations to accommodate more people living in the vicinity of a transit station. The success of the Naya Raipur TOD depends not only upon the ability of the transit service to support development, but the degree to which it promotes an active and engaging street life.?

Mixed land use also minimises the number of motorised trips of residents. It has been found that residents would like to do up to an average of 3.5 trips per day. These trips include going to work, shopping, going to school or college, visits to friends, the doctor, or public facilities such as libraries, etc. TOD aims to reduce residents? motorised trips so that really essential trips such as going to work to a comparatively distant workplace can be done by public transport while all the other trips can be done by walking, cycling or even through feeder and intermediate public transport like auto rickshaws, thus avoiding the use of a private vehicle. 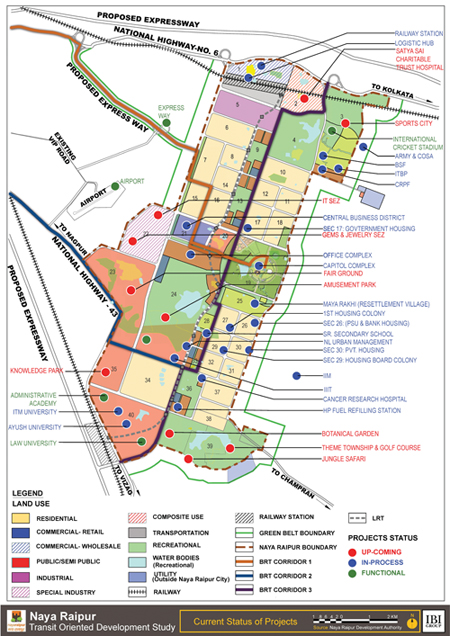 The IBI Group is doing an extensive study of land use as provided by the Naya Raipur Development Plan 2031 and has made many suggestions for parking and mixed land use. It is working with NRDA staff, local stakeholders and experts to finalise the recommendations. The study has found that the plan placed too much emphasis on private vehicle use which is not favourable for TOD and encouraging public transport. The Naya Raipur Plan has assigned 26.7% of land in the city for residential purposes whereas the IBI study has observed that the overall distribution of land uses at the city and station area levels need to be further analysed ? for example, a target allocation between 30% to 60% for residential uses is generally observed in successful TOD projects, depending on the transit station character (residential focus vs. central business district) within the TOD station zone and the market acceptability. Low FARs or FSI (Floor Space Index) create large spaces that are not walkable but are more car-scaled than people-scaled. Under the current Plan, maximum FAR is 1.3 for buildings in residential areas whereas the IBI study observed that for urban areas to have good walkability and transit friendliness, FAR should be between 0.6 and 5.0 depending on station character and land use within the TOD station zone. Kalra and Ghate inform that a diverse mix of land uses in close proximity to each other are being recommended for the project while the appropriate densities are currently being studied, given the unique nature of the project since it is a greenfield capital city.

Previous: Of Sustainable Urban Transport and Systems
Next: Fighting for the Future of America?s Roadway Safety and Mobility