Mathews adds, ?Traditionally cities in India followed a pattern of work areas and shops at the ground floor and habitation on upper floors which were a sustainable way of avoiding long travel distances to work. In Mumbai, for example, the suburbs and extended suburbs within the Municipal Corporation limits initially grew in pockets around railway stations which served as a sustainable means for travelling long distances by public transport. However, these developments predate the onset of the private automobile and other market forces. Today cities follow a pattern which is reactionary, need-based or real-estate price driven. In Naya Raipur development density, intensity and type of mixed land uses are being suggested in Sector 31 based on proximity to the BRTS system and its feeder network to ensure an inward looking, vibrant and active residential sector. (Sector 31 is being developed based on the suggestions of Embarq. The model of development in this sector will be later emulated in all other sectors). Building types and built form envelopes have been carefully selected and designed based on the types of street they abut including the type of uses that are suitable to that zone.? 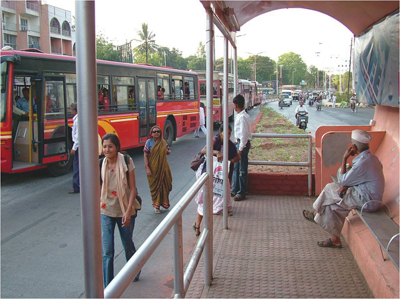 In sector 31 of Naya Raipur, a predetermined grid of 800m x 800m forms the basic unit of the residential sector that is currently being developed. In this large sector, pedestrians are being provided with a smaller 75m x 75m grid which is easily walkable whereas vehicles use larger 150m x 150m grids. This separation of the pedestrian and vehicle paths ensures minimum conflict between them and safety of pedestrians. Each of the 150m x 150m blocks has a centralised green space that runs throughout the larger block to form a larger green walkable network.

An important factor that has been taken care of in the TOD project has been the preservation of traditional movement routes and natural systems in the region. Traditional movement routes are pathways such as walking paths and ox cart pathways used over several decades by people locally while natural systems include the water channels that connect water bodies such as lakes, streams and rivers. Mathews elaborates, ?Ensuring the continuity of traditional movement paths also ensures the continuity of people?s social networks and cultural interactions which are intrinsically connected to these routes. The TOD design strives to maintain this continuity as such greenfield developments will also take several years to get occupied. Natural systems are also ecologically sensitive areas and should not be built upon. Ensuring the lakes remain water filled in future requires the natural water channels to be preserved. These systems have been integrated with parks and open spaces within the residential sector and form well connected pedestrian routes and give people an enjoyable walking experience.?

Though TOD minimises the use of cars and private vehicles, it is not that TOD does not have any provision for them. It recognises that residents will have to do some trips by cars and two wheelers. Therefore, an important characteristic of TOD is reduced parking standards ? it allocates less parking when compared with non-transit developments. This reduces the developer?s cost in the provision of excess parking lots and is environment friendly too. Parking space required is further reduced by encouraging multipurpose trips and facilities such as park and ride for users of the mass transit. The IBI study has observed that the Naya Raipur 2031 Plan has allocated a parking standard of two equivalent car spaces (ECS) per 100sqm of floor area which encourages private vehicle use. Instead, it has suggested an optimal range of 1.0 to 1.5 car spaces for projects, depending on the land use types, within a ten minute walking distance of the BRTS station. This is based on a study of best TOD practices from around the world.

Since the heart of TOD is easy access to transit and other services, bicycles play an important part. Bicycles help expand the service of transit stations without relying on automobiles or bus services. Well laid out bike lanes, bike routes and secure parking make the bicycle an easy and attractive option. Further, since walking trips form a crucial part of TOD, in Naya Raipur?s sector 31 the road layouts have been designed for safety throughout their alignment by virtue of road geometry, spacing, traffic-calming measures at major intersections, restrictions on speeds and prioritising road space allocation based on use and conduciveness to pedestrians. NRDA has floated tenders for the development of these non-motorised transport (NMT) facilities and the process of short-listing contractors is going on at present. Bicycle parking facilities will be provided at BRTS stops. Pedestrian priority corridors will have traffic signals, grade separation and roundabouts at key intersections. Driveway crossings over pedestrian circulation routes are being minimised wherever possible. Three primary types of pedestrian routes are being considered — for walking commutes through traffic, for commutes within and around the station area and for recreational commuters.

At present the construction of the main arterial road network and residential sectors is underway. The Development Plan, DCRs and urban design guidelines have been prepared. Two pickup points have been identified for BRTS at central locations in Raipur, one at the present Central Secretariat and the other at the Railway Station. While the location at the Central Secretariat has been approved by the State Government, discussions are on with the Railways for the pickup point at the railway station. The next stage includes a collaborative design charrette which is an intensive session where citizens, designers and others will give their inputs on a vision for development. The city, being a capital city that is being built on a greenfield site, has the opportunity to be a development that, in Mathews? words, will be at ?the intersection of Transit + Urban Development + Urban Design?.

Previous: Of Sustainable Urban Transport and Systems
Next: Fighting for the Future of America?s Roadway Safety and Mobility