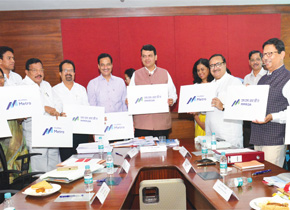 MMRDA now has a new logo which indicates the nature of varied projects the Authority has been implementing in the recent past.

MMRDA also announced its plans to develop and widen its region by including Palghar, Vasai, Alibaugh, Pen, Panvel and Khalapur district under its jurisdiction. The idea is to develop these regions in planned manner and also sustain the development. The emphasis is on development of ‘Growth Centers’ which will work as a catalyst for development of region.

Maharashtra Chief Minister Devendra Fadnavis who launched the logo also unveiled the Green Policy developed by MMRDA for metro lines. The policy will help to optimize energy consumption right from the planning stage. Some of the key initiatives taken in this pursuit are – Developing Green Metro Stations by using 100% LED-base smart lighting and optimizing airconditioning load by using energy efficient systems. Use of Occupancy sensors to optimize lighting load, harvesting natural light to supplement station/depot lighting, solarisation of all elevated stations, car depots & control center and using green technology in Rolling Stock. In recognition of the green initiatives adopted by MMRDA for its metro network, ‘The Indian Green Building Council in association with CII’ also issued certificate registering “52 elevated metro stations” planned for Metro Lines 2A, 2B and 7 under IGBC Green MRTS rating.