New Initiative at Dubai Metro Integrating with other Modes of Transport 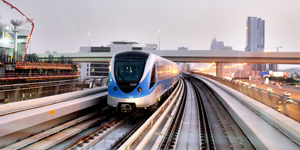 When both Phase I (Red line) and Phase II (Green line) of Dubai Metro get completed, we will be covering a distance of 75km, and will become the largest metro in the world,” said Essa Abdul Rahman Al Dossari, CEO, Public Transport Agency Roads & Transport Authority, Dubai during a brief conversation with TrafficInfraTech at the UITP World Congress and Mobility & City Exhibition in April this year. “In Dubai our traffic technology is more advanced than even that of USA or Europe. We have been approaching our multi modal transport integration through three different areas – Nol card, journey planner Wojhati and operational side of different modes.”

The integration of the Nol Card with the credit card has been made possible for the first time in the Middle East through the instigation of a co-branded combi-card that combines the features of a credit card and the unified fare collection blue card – Nol Blue Card. By definition, the Nol Card is an electronic smart card that enables commuters to pay for the use of various RTA transport modes in Dubai with a single card. Therefore, the new combi card will enable its holders to benefit from all the features of the credit card as well as the contactless smart pay card besides the possibility of using it to pay the fare of various public transport modes and parking fees. The combi-cards will be issued in both a credit and debit variant and will provide the customer with the added convenience of all card benefits such as insurance, convenient payment options and superior value through exclusive discounts.

The cards will be sold, and can be topped up (value added), at Metro and Bus stations and with designated authorised agents. Online facilities using the internet will also be available for the same. All transactions, including sales, top-up, and usage transactions, will be processed through a central clearinghouse operated under the direct control of RTA (scheme operator).

Dubai today has successfully integrated its Metro System with other modes of transportation. It is building multi modal stations where bus, metro and water transportation (waterbus, water taxi) can meet and interchanges are possible.

The Road and Transport Authority (RTA) was established in 2005 to look at Dubai’s traffic requirements. Buses were the only available public transport mode then. RTA finalised a comprehensive Transportation Master Plan to encourage the shift of demand from cars to public transport.

The Metro was planned to ensure minimum number of transfers for passengers, minimum walking distances, adequate parking area for each station and traffic safety within and around metro stations. The Bus Master Plan was adjusted to take into consideration the new Metro stations. New bus feeder routes and intercity lines were introduced to serve metro stations. Another initiative was to create bus hubs and provide dedicated bus lanes to enhance accessibility for several metro stations. Dedicated bus stations were constructed near metro stations.

RTA constructed more than 50 pedestrian bridges equipped with travelators. Detailed studies were also conducted for other facilities such as vehicle and taxi drop off, taxi ranks and bicycle racks.

The results are considered to be very good compared to other cities in the world.