In my long writing/editing career, never before have any requests for interviews with people in power been accepted so fast and facilitated so professionally. This speaks volumes for the kind of discipline and professionalism the Road Transport & Highways and Shipping Minsiter Nitin Gadkari has brought into the Transport Bhavan. 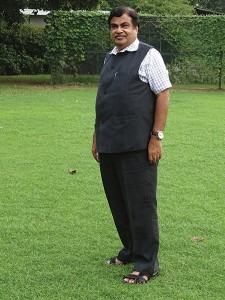 With numbers and countless projects of his “ Five Year Plan” ready at his fingertips, the Minister speaks with infectious enthusiasm about how it is possible to bring about a change in the traffic and transport sector in India. Increasing the road construction from 20km a day to 41km, completing Golden Quadrilateral project, streamlining infrastructure funding, reducing road accidents by 50%, bringing black spots to zero, country wide road and water-way connectivity, highway connectivity to neighbouring countries, greening of highways, making logistics easy and technology driven, ITS for traffic safety and transport departments…he rushes from one to another as smoothly as the five peacocks walk around under the evening sun at the lush green garden of his official home in New Delhi. For him, five years seem enough to achieve what could not be achieved perhaps for decades.

During the tender process, we will select only the best technology in the world. Our department has taken a decision that in the road construction cost, one percent of cost of construction will be for plantation, transplantation and beautification. And one percent will be for road safety like surveillance cameras, signal systems and road marking.

When the government is developing traffic infrastructure in such a fast pace, do standardization, quality and inclusion of technology pose challenges? 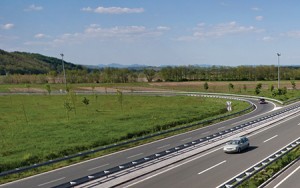 In road construction, we are now focusing on four-lane roads. Previously, as per the policy, if the project was above Rs25,000Cr, we had decided to go for four-lanes. But now, we have taken a decision to make four- lane road above `10,000Cr. We have also taken decision regarding standardization in construction. The designs are of international standards and also meet the codes of the US and Germany. The technology being used does not require maintenance.

The most important challenge is tackling the increasing road-accidents every year. It is an important area because every year, around five lakh accidents and one lakh & fifty thousand deaths are registered. Now, road safety is our priority. We are looking at installing crash barriers on both the sides and also concrete pillars. In many key areas, a lot of accidents are registered. We are going to implement intelligent and smart traffic system with video cameras and traffic signaling systems. Road markings also play an important role and this system itself has so many technologies. So a combination of crash barriers, traffic signal system, video cameras and road marking system will be looked at in tune with the international standards.

The government is now going for express highways because they are totally access controlled. As far as the gradient and kerbs are concerned, these will be made for a speed of 200km/ hr or 150km/hr. The first project that we have started working on is Delhi Eastern and Western bypass. The work at Delhi-Meerut has already started; the alignment will start from Nizammudin Bridge from Delhi and will continue on existing NH-24 up to Dasna (km 30.38). From Dasna there will be a completely new alignment up to Meerut. This is of 14 lanes out of which the third, sixth and eight lanes are access-controlled.

This year we are planning to start the work on Vadodara- Mumbai expressway and plans are on anvil for Delhi-Jaipur, Delhi-Katra, Chennai-Bengaluru, Bengaluru-Hyderabad and Vijayawada to Chennai, Hyderabad and Bengaluru. The International standards, rules and norms are already being followed. The projects are monitored by a committee under the chairmanship of SR Tambe, the former secretary in the public works department of the Maharashtra government. The committee has experts from all parts of the country.