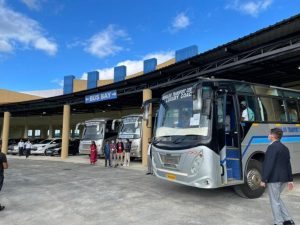 Union Home Minister Amit Shah has recently inaugurated the Inter-State Bus Terminus (ISBT), funded by the Ministry of DoNER and built at Mawiong near Shillong. The Minister said that connecting all the Northeast State capitals by road, rail and air by 2024 has been the vision of our Prime Minister. Also present at the inauguration were, Meghalaya Chief Minister Conrad K.Sangma, Union DoNER Minister G Kishan Reddy and MoS Science and Technology Dr Jitendra Singh. It is important that Shillong is connected with the other seven Northeastern states. This will help the economy and progress of Meghalaya and other Northeastern states.

Earlier the Union Minister for Road Transport and Highways, Nitin Gadkari had inaugurated and laid foundation stones to around 15 national highway projects in Manipur. The new projects span a total length of 298 km and have an estimated cost of Rs 4,148 crore. The Minister also flagged off vehicles at the newly inaugurated Makru Bridge situated along the NH-37 (Imphal-Jiribam Road).