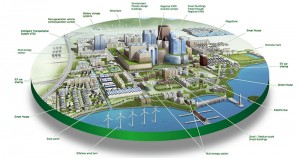 The Delhi Development Authority (DDA) has come up with a plan to turn a 24,000 hectare area in Najafgarh, Kanjhawala and Narela into an integrated Smart City. The Smart City will have dedicated bicycle lanes, high frequency mass transport, 24×7 water and power to all households, no waterlogging, 100% internet coverage, 30 minutes emergency medical response time and facilities like parks, retail outlets, parks, schools, and recreational areas within 400m of about 95% households.

The DDA is modelling the smart city on the recently-commissioned Gujarat International Finance Tec (GIFT) City which was the first Smart City commissioned by the government as part of its 100 Smart City campaign. By the end of the year a project management consultant would be appointed and the land pooling scheme for the project would begin. The land pooling and its development have been planned to go on simultaneously with the development of supporting infrastructure like roads and public transport hubs.