“There must be a legislative framework which supports UMTA. Over the years, we are working in silos like railways and roadways have their own domain; when waterways and airways are added, who is going to put all these ideas together, plan and execute? So, UMTA must have a holistic view and if that happens that would be a great thing to have.”

Rushab Shah felt that the government needs to build a platform for private players to integrate their services into the transportation networks especially in metros. There is no opportunity for a private transportation player. From a commuter’s point of view, there is going to be multimodal transport; he does not care whether he must take a bus, an auto or a train. So, if there is technology today and google maps across other cities, you can see what are the different modes that you can take. So going forward, bringing in private players also onto this framework is going to be important.”

“For UMTA to perform the role, it must regulate them and see how the integration is happening. It was rightly demonstrated that in many cities, STUs are not performing well and there are several reasons. Now when we go to the STUs, they say, we are not getting money from the Corporations. Why is it that STUs should get money and UMTA should enforce that Corporations should spend at least fifty percent of their budget on sustainable transportation, improving bus condition, getting more buses and the capacity building, improving bus infrastructure etc?

“Unless there is an authority which is constantly puts pressure on our urban local bodies or our STUs to perform well and ensures integration, this is not going to happen. That is why I see UMTA to play this big role. It should be empowered to implement and take decisions for ULBs and STUs.”

Vivek Ogra added, “From the technology standpoint, UMTA probably should be looking at managing the central mobility management platform. Then automatically, from the administrative and operations perspective, all the elements in the mobility start interacting with the central authority. For example, Ahmedabad Municipal Corporation has two systems: BRTS and AMTS; there is also common ITMS infrastructure that has been created and both transit systems are cooperating with the same system. Now, eventually, what is going to happen is Intermediate Public Transports (IPTs) and other form of transport system are going to be developed in the city — whether private or public funded — and going to co-exist on that platform. When regulatory and management aspects of operations and also the future planning aspect go to a central authority, integration of decisions and operations starts.”

Deshpande’s point was that we start from a small thing and then expect a larger thing to happen. “ If we take the example of Maharashtra, today we just have six to seven thousand buses on road and actually it needs three to four times the number of buses in all the 27 Municipal Corporations. But only Pune, Nagpur and Nashik and two to three other cities have some amount of formal buses. Now in all these big size cities, UMTA can play a big role in getting the first thing right like improving the efficiency of buses by showing some small quick wins, empowering the STUs to take bold decisions and ensuring that fund flow from the government to STU is happening. If we start showing some operational improvements, the public will feel confident. Showing operational improvements is the first need.”

Today’s definition of public transport revolves more around who is the owner of the service, who is the operator. Even the private buses are carrying the public only. So whatever comes under sharing mechanism which is offered to general public has to be defined as public transport. 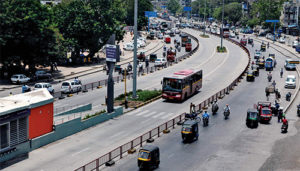 Shah agreed that it makes sense to start with a small beginning like aggregating data across the different bodies or collaborating. “We see this in some metros where the STU is trying to create feeder routes for the metro. So, finding some singular use case that can create a platform for collaboration between the different transport bodies is the first step. Let them also interact with each other and then expand that to larger goals. Forget about integrating between multiple modes, today even private buses are not allowed to go near 500 metres of public transport. So, we are talking about integration on one side in multimodal, here within mode itself integration is not happening. There is no one single bus station from where intercity, intracity, private, public, all kinds of buses can be accessed. So, first thing we need to do is to come out of this mindset. “