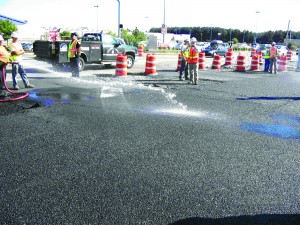 If we were to choose one aspect of pavement engineering that has progressed significantly in the last decade and continues to do so, it would be the understanding of the impact of pavement construction on our environment along with the development of design and construction methods for sustainable development. Further, based on the fact that the domain of pavement engineering ranges from the entire earth to molecules, if we are to choose a second topic, it would be the multidisciplinary and multi-scale approach for solving problems. This is because all great challenges are multidisciplinary – a road cannot be built without affecting the environment, and all things are multi-scale in nature – properties cannot be controlled without controlling the molecules. In terms of pavement engineering, this means advancement in terms of sustainability, materials, design, construction and maintenance.

Construction of roads affects our lives in many ways. First, the heat that is absorbed by the high heat capacity and low conductivity pavement materials raises the temperature of the pavements as well as the air surrounding it. This causes a heat island effect, especially in cities, which contributes to the global warming effect. The latter leads to a number of disastrous consequences. Second, the covering of the earth’s surface with paving materials leads to a drastic reduction of inflow of water into the earth. This lowers the water table and leads to scarcity of water. On the other hand, climate changes lead to disasters such as flooding which also pose a major challenge for pavement engineers. Moreover, the process of road construction leads to extensive depletion of locally available aggregate resources. To keep the construction going, aggregates have to be sourced from distant places – a process which requires many vehicles hauling aggregates over long distances, consuming enormous volumes of gasoline, releasing significant amount of smoke, not to forget the high piles of scrap tyres that fill up landfills and often lead to big environmental problems when they catch fire.

But, here is the dichotomy – well performing and safe pavements are absolutely essential for maintaining the quality of life that we want. Therefore, the advances that have been made in the recent past in pavement engineering, and still continue to be made, are those that provide pavements with better performance and longer lives – through the introduction of new materials, by reducing cost and by saving energy and time for sustainable development. For example, the necessity of building roads with lower energy and less material has fuelled the development of low energy mixes as well as recycled mixes. Infrastructure builders in the US can get LEED credits in projects that involve road construction by using sustainable pavement technologies. An example of this is the LEED credit earned by the use of porous asphalt pavement constructed on a recharge bed while another example is the credit earned by coating asphalt pavements to raise the Solar Reflectance Index, thus reducing the heat island effect.

Materials for milling of road surfaces

Milling of road surfaces has become a common activity to get better roads. Milled materials are used to obtain better quality road shoulders which, many times, are not paved and hence, can destroy the main pavements by breaking and allowing ingress of water. The use of an overlay after milling a road surface also ensures that the heights of underpasses (clearance between the over-bridge and the road surface) are maintained, otherwise repeated overlays would, at some point, increase the thickness of the road to such an extent that it would lead to vehicles getting stuck in it. Milling also stops recurrent rutting and provides good drainage and materials for recycling. Due to the rising costs of materials, and the savings inherent in the recycling of milled materials, recycling has become quite common. The technologies used are hot mix recycling, hot-in-place recycling, cold-in-place recycling and full-depth reclamation. Major advances in plant processes for recycling of milled materials have been fractionation of RAP for more efficient recycling, milling teeth (the use of tungsten carbide teeth in a drum – the drum rotates, either in upcutting or downcutting mode and the teeth mill the surface of the road), microprocessor based equipment and rubblisation for recycling of concrete pavements. What is more recent is the push towards high RAP recycling up to 100% – already in practice in places like Germany, and in the not too distant future in the US.

A great variety of pavement materials and technologies were developed through the 1990s and the 2000s – what has become a major trend is the adoption of the most suitable technology for the project. For example, stone matrix asphalt, open graded friction courses and rubber mixes are being used selectively but widely for specific purposes such as rutting resistance, water drainage and prevention of reflection cracks in concrete pavements.

A recent technology that is being introduced in both asphalt and concrete pavements is of pervious or porous pavements (Figure 1) that allows the infiltration of rainwater and recharging of the precious ground water. At the same time, it helps us to control storm water, especially in large paved areas such as cities. Side by side, adoption of rubber mix pavements have helped us to cut down noise levels significantly, leading to quiet pavements.

Another field where recent advancements have taken place is cool pavements. They range from the simple adoption of light coloured aggregates or paints to reducing the absorption of heat to the use of water-retained pavements in Japan. Increasingly, pavements are also being looked upon as energy harvesting systems from where the heat can be extracted and at the same time, the life of the pavement can be prolonged. Cool pavements refer to a range of established and emerging materials and tend to store less heat. They may have lower surface temperatures when compared with the conventional products. Reflective pavements help lower surface temperatures and reduce the amount of heat absorbed into the pavement. The definition of cool pavements has expanded to include permeable pavements as well.

Another emerging trend is the use of bio-binders which are produced from natural materials such as flowers and plants. They produce less smell and fumes, need much lower temperatures, and produce far less green house gases and toxic materials. They also come in different colours and can be used to modify asphalt, extend asphalt or even completely replace asphalt.

Previous: Sumo Gold and Range Rover Evoque by Tata Motors
Next: The cheapest infrastructure in Turkey is opening