Can you take us through the present status of the Pimpri Chinchwad Smart City project?

Two projects are being implemented under the Smart City Mission where the civic body has not spent any money. One project is setting up of solar rooftop plants on the civic-run Yashwantrao Chavan Memorial (YCM) hospital in Pimpri and another is water treatment plants in Nigdi. The contractor has implemented the project and the civic body is purchasing power generated by them.

The works of laying of optical fiber cables, establishing smart kiosks and wi-fi getaways throughout the city are being carried out in full swing. In addition to this, the works on smart transportation, smart water management, solid waste management, smart street lighting, environment centers are expected to be completed by mid-February 2020. In 2018, the Pimpri Chinchwad Municipal Corporation sanctioned DPR of the metro line which was a landmark decision.

After Pimpri Chinchwad BRTS corridor, which are the other corridors underway? 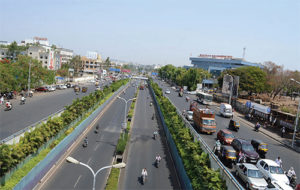 BRTS has been running successfully in Pimpri Chinchwad and there are plans to extend the route. At present three corridors are functioning. The fourth corridor from Mulshi to Kalewadi will be launched very soon.

The fifth corridor connecting two important junctions– Alandi and Vishrantwadi is in the final stages of completion There is a sixth corridor being planned between Bhakti Shakti Chowk to Tukai chowk. We are focusing on public transport and strongly feel that BRTS is a better choice of public transport and will play a key role in reducing the congestion on roads if clean buses are provided.

We have been successful in providing good quality buses with better frequency to accommodate maximum people especially during the rush hours. The Corporation is in the process of procuring around 1000 buses and I am sure the services will improve when operational.

PCMC have placed an order for 153 electric buses with Olectra Electric. Among them, 25 buses have already been supplied and are operational. The rest will be delivered in batches and are expected to be operational soon. The PCMC is planning to create pedestrian corridors connecting main roads to BRTS routes to increase ridership. We will frame the necessary by-laws and make security enhancements.