Portable Variable Message Signs Why does India need them?

Mobility challenges all over the world can be addressed by strategies like managed lanes and active traffic management. These are cost-effective methods of prolonging the life and maximising the efficiency of the infrastructure which, in turn, can postpone the need for major expansion projects.

Variable Message Signs (VMS) have come to play a big role in the management of traffic all over the world. Though they are not exploited to their entire potential yet in most of the countries they have been introduced in, their importance cannot be undermined. Also known as Changeable Message Sings (CMS), Dynamic Message Signs (DMS) and Matrix Signs in the UK, these are electronic traffic signs that are used to disseminate the much needed information on the road conditions to commuters / travellers like speed limits, accidents, traffic congestion, repair work, etc. They are also used to guide the drivers about alternative routes, traffic conditions, available parking spaces and accident spots. The latest addition in the list of various VMS is the Portable Variable Message Signs (PVMS).

The PVMS are electronic, trailer-mounted roadside devices, usually solar powered with an inbuilt battery array. Their closed electrical system allows for continuous operation throughout the year. The message display consists of light emitting diodes (LEDs) grouped in various configurations as pixels. Either amber-only or one of up to five different colours can be utilised on each pixel. Each message can contain up to 500 pages or frames and each frame can display from 0.1 to 9 seconds. The frames displaying in a sequence at 0.1 seconds each, appear as an animated sequence.

In most cases, the PVMS are fitted with SIM cards and communicate via GPRS (or equivalent) back to a central Server. The PVMS operator can then control the PVMS through a web-based application using a web browser on his PC, laptop, tablet or phone which also interacts with the Server. The battery voltage, LED brightness, message display and other information can be retrieved from the PVMS, and new messages can be remotely created and uploaded to the PVMS with ease, depending on the software and innovation of the PVMS manufacturer.

Use of portable VMS around the world

The European Union, USA, Canada, Australia and New Zealand have standards which outline the design, manufacture and use of fixed and portable Variable Message Signs. While in most cases this standard is not enforceable, it provides the manufacturers with a base-line from which to develop a product that can be correctly utilised in most situations, and to ensure that reliability is maintained. 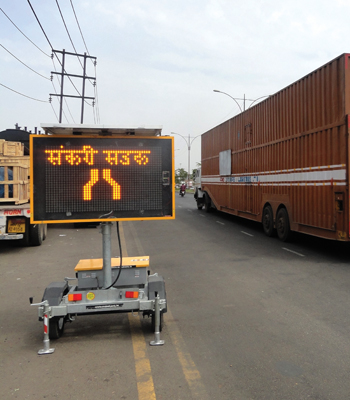 In Canada, the USA and Australia, PVMS are used on many larger road construction or alteration sites which can extend over many kilometres. The PVMS are sometimes integrated into an Intelligent Transport System to allow for quick and effective accident response. For example, in Melbourne the major ring road around the city (the M80) is undergoing expansion works. Over 50 PVMS have been deployed. These units are connected to an ITS implementation called STREAMS (by Transmax based in Queensland). Usually, the PVMS are managed by the construction site contractor. They display messages such as SPEED ZONES ENFORCED. When an incident occurs, the central road operations centre can override any displaying messages with driver alert and accident advisory messages. This improves traffic flow and eases congestion as drivers are provided with travel alternatives and early warning.

Many equipment lending companies in Australia devote a section of their business to the lending of portable Variable Message Signs. While this is not as commonplace in other countries, in Australia the hiring of Variable Message Signs is a burgeoning market and it continues to grow at a rapid rate. Many construction companies prefer to hire equipment for the duration of a given project. In other cases, road authorities use the PVMS for a particular enforcement and driver education campaign against drunken driving or speeding. The PVMS is also rapidly deployed by hire companies on behalf of road authorities for incident or emergency response.

In New Zealand, PVMS are mandated to be used as advanced warning information displays situated well before a roadwork site. They warn drivers of a change in the traffic conditions. Where works move slowly along the road such as road patrols or road marking, the PVMS Sign Display is fixed on the back of a truck or ute (utility vehicle) and is powered by the truck’s power system. The use of PVMS to advise drivers of the upcoming road works and changes in road conditions is also commonplace in New Zealand.

Need for VMS in India

The importance of the road network for the economy of India is well known. A world-class road infrastructure is required for the industry to grow. The Union and State governments together invest heavily in improving the roads. Completed projects such as the Mumbai-Pune Expressway and schemes such as the Gram Sadak Yojana and the Golden Quadrilateral National Highway Development Project are crucial.

It is obvious that traffic congestion, poor road conditions, weather conditions leading to poor visibility, accidents, and road rule violations are major issues facing many parts of urban India. The use of PVMS can play an important role in helping to address many of these issues, some of which have been outlined above.

As has been said earlier, driver education can be improved through displaying graphical messages on the PVMS (see some of the example photos). Many drivers come from rural areas and have limited literacy skills. Therefore, easily recognisable graphics to advise these drivers of road rules may be extremely helpful. For example, information that the left lane on the Mumbai-Pune Expressway is meant only for trucks could easily be graphically illustrated on the PVMS. Another instance of driver education may be the use of an animated sequence on the PVMS to instruct drivers to drive in the lanes as marked – although some argue that enforcing correct lane usage may increase traffic congestion due to decreased road utilisation by the various types of vehicles on the roads.

Using PVMS instead of permanent painted signage for short driver education campaigns for short periods appears to be more effective. The driver notices and responds to the message when the signage is deployed but after a time, the effect decreases. Therefore, redeployment of the PVMS for other campaigns on different stretches of the road will maintain effective utilisation and improve driver education. The portability of the PVMS offers clear advantages such as ease of deployment and setup, moving to new locations as required, and also maintenance.

Poor visibility due to weather conditions such as fog leads to accidents and traffic congestion as some drivers slow down and other drivers do not. Fog or rain monitors, and other weather measurement devices, can be affixed to the PVMS on-location so that changes in weather are quickly addressed and drivers can be instructed to proceed cautiously. Further, when an Advanced Traffic Management System or some other ITS has been implemented in an area, the weather data can be reported to, and used by, the Central Operations Centre for more effective traffic management.

As Indian infrastructure develops, learning from and adopting the best practices of the world should be considered imperative. The use of Portable Variable Message Signs is recognised as indispensable to road safety, and can be used as part of the tools used to tackle many road issues. An Indian standard for the use of Portable (and Fixed) Variable Message Signs is being developed to set guidelines for the development and use of PVMS. PVMS is being used effectively in many parts of the world, and as uptake increases in India, the benefits will be clearly visible.

(David A Venema has been with Data Signs Pty Ltd, a known international name in traffic management equipment, since 2005. He now manages a team working on design and development of software/firmware/apps for traffic management products, and integration with various ITS. David also contributes articles related to traffic management to various publications).