May 24, 2012 in Infrastructure, Traffic Management

Ashok Datar, Chairman, Mumbai Environmental Social Network was in China recently to study its traffic rules and travel behaviour. Here, he compares Hong Kong, Guangzhou and Shen Zhen with Mumbai and observes that we have a lot to learn from these three cities.

When we think of congested cities, we think of Indian cities. It is a general perception in India that Indian cities are the most congested cities in the world and the management of traffic is the most difficult here. A comparison between Mumbai on one hand and Hong Kong, Guangzhou and Shen Zhen on the other may be interesting as these three cities in prosperous South China are as populated and congested as Mumbai. In fact, Guangzhou – where Asian Games were held in 2011 (with preparations having been completed six months in advance) – is only 150km away from Hong Kong and has exactly the same population as that of Mumbai – 1.30 crore. Population of Hong Kong is 75 lakhs and that of Shen Zhen, which falls half way between Hong Kong and Guangzhou, is also 1.30 crore Thus, these three Chinese cities in the fertile Pearl River delta pack a population of over 3.20 crore in a region half the size of the triangle encompassing Mumbai, Nashik and Pune. Population of Shen Zhen was barely

30,000 when the first capitalist experiment was launched in the city by Deng Zhou Peng in 1986! The region is, undoubtedly, the biggest manufacturing hub in the world with Shen Zhen producing half the spare parts of all mobile phones in the world as it is rapidly graduating from low wage, low skill textiles to electronics!

The following table attempts a comparison among the four cities.

Guangzhou has the highest number of cars in absolute terms – 2.4 million, as well as number of persons per car, i.e. 5.4 – as good as many European cities! Of course, the total area of Guangzhou is several times larger than the compact Greater Mumbai or even Hong Kong. 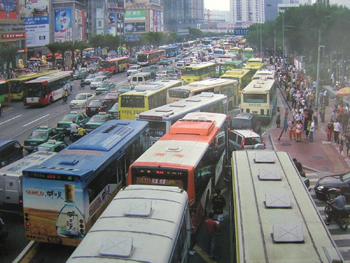 Hong Kong is one of the richest cities in the world. It has more Rolls Royce cars and Mercedes cars than any other city but the number of persons per car – 19 – is higher than Mumbai which stands at 14. The car population is quite high in Guangzhou and Shen Zhen and we understood from the local authorities of these cities that they are now contemplating restraining measures for the number of cars – something that has already started in Beijing and Shanghai! On the other hand, it was observed that in Hong Kong, the number of buses in absolute terms – at 24000, and per lakh basis – at 320, is too high as compared to other bigger cities in the table. As compared to Mumbai, it is almost eight times on a per capita basis! It is remarkable that the share of bus trips in total passenger trips per day is 52% which is higher than even its highly efficient metro which has a large network in excess of 200km. Twenty years back, there was no suburban or metro rail network in Hong Kong at all. But now, both systems are very efficiently meshed with each other. As a result, it is possible for any sales executive, consultant or lawyer to have three to four appointments per day in an effortless and unhurried manner by using public transport. It is a sign of a truly business friendly city – a city whose decibel level of traffic is quite low. It is a city that, unlike Mumbai, wears quite a relaxed and unhurried look. In Mumbai, it is difficult to achieve more than two appointments even by using private transport!

In Guangzhou, one thousand buses are deployed on its busiest artery of 22km in a BRTS format which carries more than 900,000 passengers a day. But a large number of private cars in this city manifests in severe traffic jams in many parts. Its metro system is new and is still settling down. Shen Zhen, on the other hand, has 600 fully electric taxies and a small fleet of 12 electrically operated buses. This is its focus area and it hopes that within the next three years, it will achieve exponential growth in the number of taxis and buses running on electricity.

Relatively low cost intermediate transport in the form of taxis and auto rickshaws has become one of the causes of traffic congestion in Mumbai – their number is perhaps highest for any city in the world. We must ensure that all the taxis and rickshaws should be brought under the radio paging system purely based on the mobile phone platform and they must be coupled with electronic metering, improved discipline and management. Fee for parking will create a win-win situation between this trade and the users! Today, we see them in adversarial position which should not be the case.

In Guangzhou, one thousand buses are deployed on its busiest artery of 22km in a BRTS format which carries more than 900,000 passengers a day. But a large number of private cars in this city manifests in severe traffic jams in many parts of the city. Its metro system is new and is still settling down.