Radar technology to get rid of accidents with ghost drivers 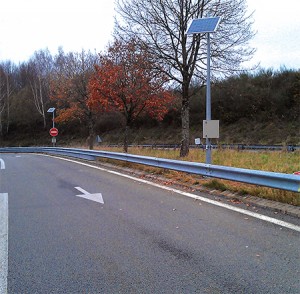 Wrong way drivers on highways or ramps are a challenge for road safety: Roughly one fatality each year every 1000km motorway over European roads. It is not the major cause accident, but is too much indeed. When a lorry carrying flammable products is impacted, it can lead to fire on the carriageway and to melt the bitumen as it happened several months ago on the A10 motorway in France. No need to explain the costs due to motorway closure and repairs. Yet to date, no solution to arrest offenders or to inform other users have been widely deployed. At Neavia, we have been working since 2009 on this subject and have gathered experience on various technologies, mainly video and radar. Recent results make us confident that a new era will open soon, where ghost drivers will be detected, and road users warned immediately. 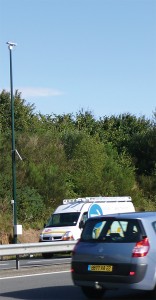 This technology has been widely used for incident detection, especially in tunnels where European regulations make automatic incident detection a mandatory feature. Following a trajectory and making a decision on a direction is not a big deal for image processing experts. It is what we have implemented over various video traffic sensors. The first in date was placed on a pole aside the road, the more recent one was installed on a gantry at the perpendicular of the lanes. The oldest one relied on a relatively simple image processing, limited by the available computing power. This was due to the constraint of solar power feeding that limited processor speed and power. On the more recent, the progress of digital processor performances enables to conciliate power and low consumption. The algorithms have also been improved in the meantime. However, lures that alter detection capabilities are more than frequent: shadows resulting of the traffic in the opposite direction that emulate wrong way vehicles; at sunset, especially when the road is wet, a dazzled video sensor; at night reflections of headlights from cars on opposite lanes.

In order to overcome video technology limitations for wrong way detection while relying on video for counting, congestion detection or event qualification, we have started to investigate radar technology. Actually, upon a single video detection, it was mainly necessary to make sure the detected object was real and not a shadow or a reflection. Measuring a distance to a target is a solution that a radar can do efficiently. We have obtained fairly good results: 90% detection rate, and a false detection rate of one every month for a 15km long motorway including 17 detection points. See for instance a wrong way detected by this system installed on a French motorway in 2009.

Although efficient, this technology required the installation of one or two poles at every junction. At the same time, for many traffic authorities, video was not a requirement as they had nobody to watch screens or manage traffic events. Thus we have continued our work on radar detection in order to minimize installations while keeping good detection performance. 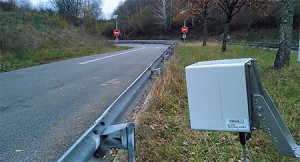 We started our investigations using Doppler radars. These are good devices for detecting vehicles and their direction and speed in all-weather situations. However their beam cannot be restricted in space so as not to detect outside a defined area. Thus, vehicles in opposite directions or reflections can lead to misdetections. In order to overcome this difficulty, we have investigated a radar technology that can provide simultaneously the direction and the location of the mobile. It has led to issue a radar that covers a field of 110°. As described on the figure below, the operating principle consists of acquiring an incoming vehicle, then tracking it, and finally making the decision. The acquisition range can reach 100m. The detection criteria are based on the coherence of the detected speed and the time the vehicle remains in the field and is also based on the measured distance. For radars, misdetection risks are those related to wind, rain, and reflections on metal objects. Wind can throw sheets, bags and other objects in the field of radar; rain may be responsible for reflecting radar waves on particles; metal signboards often placed close to and perpendicular to the route reflect radar waves. The algorithms that we have developed from precise knowledge of these lures, make the filter efficiency. The tests that have been made recently by a motorway show false detection rate of the order of 1E-5 with respect to traffic or a false detection every two months.

Fixing the issue of detection reliability now opens the possibility to inform users without going through a stage of qualification. This is a crucial point because with the exception of toll motorways, most of highways or expressways do not have traffic management 24/24 and 7d / 7, and therefore staff must qualify an event. Especially as the majority of wrong way driving occurs when the traffic is low, thus, outside of office hours. Another element has changed over the last ten years: drivers are mostly equipped with navigation systems and among these, connected systems are developing strongly. In addition, many drivers use their smartphones running a dedicated traffic or navigation application. So, as yesterday, we had deployed a large number of VMS along our roads to dynamically inform drivers, just today we will just transfer information to broadcasting platforms. Thus, a technology platform receives “wrong way” alarms, qualifies them under the rules learned from former experience, and transmits the alarm to traffic information broadcasters through standardized messages such as Datex2 in Europe. Then, it will update their information systems, and in less than a minute every road user will be informed of the risk associated with the presence of a vehicle coming in the opposite direction.

We have also coupled our wrong way detector to our C2X road side unit. Associated to the radar, our C2X road side unit delivers this alarm directly to motorists who pass nearby. The beauty of C2X technology is that each vehicle is both a bearer and a repeater of information: a vehicle will pass information to all vehicles it intersects during the lifetime of the alert. Thus, any wrong way alert can be broadcasted locally and without any latency to all vehicles in a given area and during a given time! A reliable detection of ghost drivers together with the ability of broadcasting alerts through existing traffic platforms can greatly limit accidents with ghost drivers. When all vehicles will be equipped with C2X technology, and when roads will be equipped with detectors, accidents with ghost drivers can become a no concern. With the progress of the technology we are developing, we are confident this day will come soon.