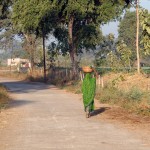 The Rajasthan government recently approved a 1,115 crore major road construction project ‘GraminGaurav Path (GGP)’, under which about 2,048km of roads would be built in 33 districts of the state. The project involves connecting building cement concrete roads which would connect 2105 villages to main mega highways. The state government also approved a project on OPRC (Output and Performance Road Contract) based to built, repair, maintain, and built new roads in Alwar and Dholpur districts. A budget of  2,372cr has been approved by the state government, for contractors to build and maintain it on bid basis for eight years.