Return of the Bicycle – Bengaluru city is riding high 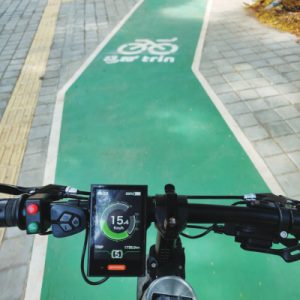 The bicycle is coming back with a vengeance in cities across the world. With the Intergovernmental Panel for Climate Change (IPCC) reports repeatedly sounding alarm over the acceleration of global climate change, leaders from various countries have been pledging net zero targets. The crisis posed by the COVID 19 pandemic however proved to be a tipping point in adoption of bicycles as a viable option for transportation, writes Sathya Sankaran, Bicycle Mayor of Bangalore and Co-Founder, Urban Morph.

As an emerging economy, India took a bold step during the COP26 held in Glasgow in 2022 to become net zero on carbon emissions by 2070. Although various programs began to roll out from the Indian government much ahead of this commitment, the cycling movement got a fillip with the Smart Cities Mission’s India Cycles4Change campaign. Cities from across the country began piloting cycling infrastructure interventions. For many cities this was the first time they were being asked to reimagine their cities to focus on bicycles as a part of infrastructure building efforts and it was uncertain if the cities would show interest. The administrators in these cities were in for a shock when they found out how many people in their cities were actually cycling. 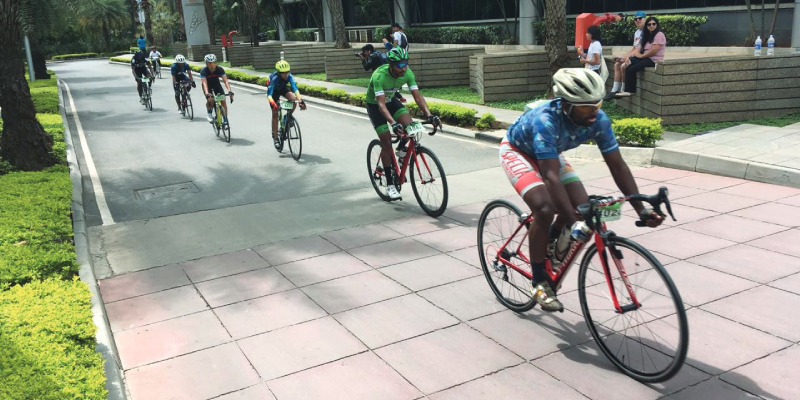 A CRISIL study in association with All India Cycle Manufacturers Association (AICMA) found that while upto 2019, bicycle sales over a 5 year period showed a modest CAGR of around 5%, in 2020, it climbed to 22%. The premium and the kids segment showed the most uptake. While the manufacturing plants remained shut due to the pandemic, the bicycle stores were being emptied by customers. There were queues in front of local bicycle stores in Bengaluru over the weekend spilling onto the roads and even accessories like helmets were in short supply.

The bicycling resurgence however had begun in Bengaluru more than a decade ago. It was a cult in the beginning when a few tech workers decided to import bicycles and set up a bicycle store to sell premium bicycles to other tech workers who wanted to let off steam over the weekends. The bicycle as a form of leisure activity picked up in the city, during the pandemic when offices were shut. Cycling in the mornings increased fivefold as per data from Strava Metro.

Recreational cycling has been increasing gradually with the availability of more premium brands in the Indian market. Even the high import duties have not dented the demand for leisure bicycles. Events organized by Bengaluru Bicycling Championships (BBCh), Bengaluru Amateur Racing (BAR) and Audax India Randonneurs (AIR) among many others have popularized cycling for fitness. From a handful who showed up 10 years ago, BBCh today boasts of at least 300 participants to some races from across the country. Randonneuring is the equivalent of Marathons for running and provides an endurance based experience for people who may not be cut out for racing but still want to push their limits of fitness. These have mushroomed across the country. 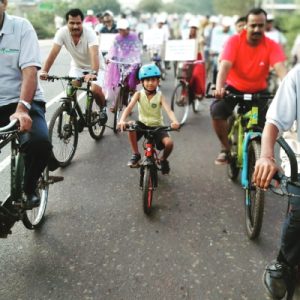 Multi day tours like Tour of Karnataka (ToK), Tour of Nilgiris (TfN), and Tour of Malnad have gained popularity. They provide curated rides in scenic areas along with competitive segments. Themed city tours are also provided by some agencies on bicycles for tourists or locals preferring to have a local not so intense experience. Cycling clubs bringing people together in groups have increased over the years. Some clubs like the Spokeswomen are targeted towards getting women to ride in groups. Some clubs are run by cyclists in apartments and many others by the bicycle stores. The spectrum of leisure experiences on the bicycle is on the rise.

A recent source apportionment study released by the Center for Study of Science, Technology and Policy (CSTEP) put transport related PM2.5 emissions including soil dust in the city at greater 65%. The problems of pollution and traffic congestion in the cities have caused enormous productivity loss. A working paper by The Institute for Social and Economic Change (ISEC), Bangalore estimated the economic cost of morbidity using the Cost of Illness approach, which accounted for approximately 13% of the personal income of commuters being lost due to traffic congestion.

Many employees have realized the damage to the environment they are causing by their travel habits and have found commuting to work by a bicycle to be beneficial. With the management of companies, however, being hesitant to encourage cycling, a technology platform called Cycle To Work intended to encourage employees to make the shift themselves. It tried to achieve this goal by aggregating individual rides at a company level and pitted each other on a leaderboard to see which companies’ employees cycled regularly for their work commute.

The platform used algorithms and third party tracking tools to get employees from more than 350 companies across the world on the leaderboard. The platform updates rides daily and has insights that have helped companies and Government accelerate interventions. Current estimated mode share of cycling as a commute in Bengaluru varies between 3 to 5%. A 20% mode share of cycling is feasible within a decade. In order to achieve this outcome companies have to step up and incentivise their employees with physical and financial benefits. 10% allocation for secure bicycle parking out of the total parking stock is a first and crucial step in signaling intent. In addition to parking, providing showers, change rooms, free cycles for hire or even a bicycle as a joining bonus will become crucial in accelerating adoption.

Public transport modes need last mile connectivity to extend their reach from transit stations to the destination in order to stay competitive with private transport. Here it has not all been good news for last mile connectivity using bicycles. Bengaluru has been experimenting with shared mobility since 2011 when the first docking stations were put up around newly built metro stations in the central business district. The first real Public Bicycle Sharing (PBS) in the country was launched in Mysore city under the Trin-Trin brand.

This was followed by the 4th generation dockless model that was allowed to operate on a permit system in Bengaluru with many private operators applying for the permit including the big Chinese operators like Ofo and Mobike. These operators soon had to shut down their operations due to financial troubles. New operators are making a re-emergence while incumbent operators have switched from bicycles to electric micro mobility due to unit profitability concerns.

The pandemic also brought to fore unique experiments on a bicycle. Cyclists in Bengaluru banded together as Relief Riders and delivered essentials to vulnerable and COVID infected. This soon spread to more than 12 cities with 725 plus volunteers delivering to more than 2000 families and saving emissions of more than 5 tonnes. It won the 2021 UN World Bicycle Day award and has been nominated to the 2022 Namma Bengaluru awards and Nobel Peace prize. The Relief Riders were able to deliver, on bicycle, medicines and groceries faster than people could find delivery executives on the few apps that delivered general parcels. This was aided by open source technologies the Relief Rider team built for discovering requesters and finding local riders.

The Relief Rider volunteers began retrofitting their bicycles with pannier bags and front baskets to be able to carry the goods. Some stitched bags with canvas and jeans materials and few others fixed plastic crates to their rear carriers. The lack of nifty affordable cargo bicycles in the country began to show in times like COVID 19. There are efforts now to build new form factors of bicycles that can cater to delivery and light cargo so it can cater to the quick delivery and online shopping market.

Technology is definitely playing a huge role in the adoption of bicycling and providing data for infrastructure decision making by cities. The cycle to work data enabled the increase in the allocation of cycle lanes in the Comprehensive Mobility Plan for Bengaluru from 175kms to 600kms.

It also helped determine the location of the country’s first pop-up bicycle lane on a 17km stretch of the Outer Ring Road in Bengaluru. Mapping and ride tracking technology was used by the planning agency Directorate of Urban Land Transport (DULT) to hatch the cycling master plan for Bengaluru. DULT also brought out the draft Active Mobility bill for the first time in the country which codifies the rights of pedestrians and cyclists. This, combined with an Asian Development Bank funded Transit Oriented Development (TOD) Policy can have the effect of shaping the future of cycling in large cities such as Bengaluru. 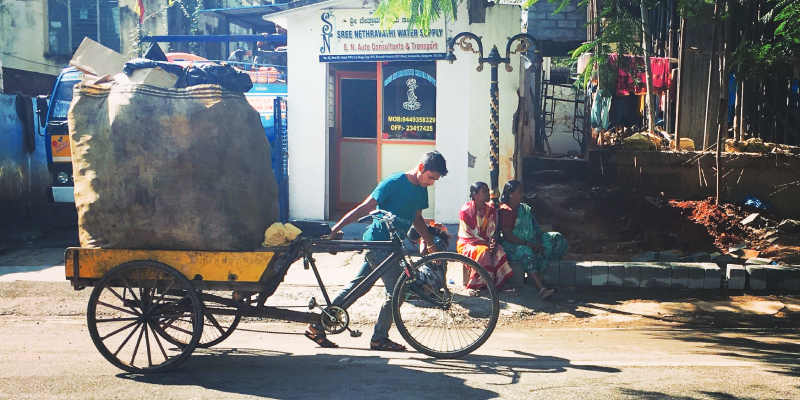 All this however does not come without involvement of civil society. When the cycle tracks, built a decade ago in a neighborhood of Bengaluru were misused, there was hardly anyone to protect it on the ground. People wrote off cycling in the city. DULT and civil society organizations worked with the cycling communities and the local residents in different areas of the city to increase awareness via an open streets event called Cycle Day.

Cycle Day which began in October 2013 for the first time in the country has been the longest continuously running open streets event in the country with more than 500 events and 50 community partners across the city taking it up until the pandemic induced lockdowns. This proved handy to gather the community when the pop-up cycle lanes created on the Outer Ring Road during the pandemic were being misused by motorists. Under the banner of Council for Active Mobility (CFAM) cyclists across the city have been conducting awareness campaigns, hanging custom printed signages etc to prevent the misuse of this infrastructure.

Bicycle self repair kiosks called Pedal Port and innovative bicycle lane separators have been piloted by DULT to encourage innovation and stay ahead of the curve when it comes to adoption of bicycling in the city. A lot however, remains to be done. Infrastructure needs to be built at a fast clip. In order to stimulate demand, integrated high quality and safe footpaths and cycle lanes need to be built at the rate of 200km per year. The need to have a dedicated cell in the city corporation for active mobility with a budget for new build and ongoing maintenance is urgent. CFAM is launching a slow streets mapping project that will repurpose existing streets with traffic calming so cyclists can use those as a safer alternative while the segregated network takes shape. This will increase the rate of adoption of cycling amongst the masses.

The future of bicycling is bright but it needs the industry to step up and stimulate demand with a variety of products for city riding.

Startups in the bicycling space can bring the much needed innovation. From pure social software like CycleToWork and Crooze to Cargo bicycles and accessories like lights and panniers, Industry, Government and Civil society need to
come together to take cycling to the next level.