The Mumbai Suburban Railway system carries more than six million commuters on a daily basis and constitutes more than half of the total daily passenger capacity of the Indian Railways itself. It has one of the highest passenger densities of any urban railway system in the world. Due to the geographical spread of the population and location of business areas, the rail network is the principal mode of mass transport in Mumbai. As Mumbai’s population swelled from a heavy inflow of migrants in recent decades, frequent overcrowding has become a serious issue, and numerous safety concerns have been raised over the years. Over 4,500 passengers are packed into a 9-car rake during peak hours, as against the rated carrying capacity of 1,700. This has resulted in load of 14 to 16 standing passengers per square metre of floor space.

The suburban rail transport in the city of Mumbai is comparable with the best in the world in terms of the magnitude of services, i.e. the operational load it supports. It’s a well known fact that the Mumbai Suburban Rail operates at a frequency of 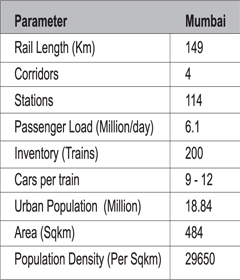 3-4 minute per train on its network – a measure which is comparable with the well known rail transport services in the world. Table 1 below provides a snapshot of Mumbai Suburban Rail.

The figures in the table above indicate that the city handles higher volume of commuters than the best rail networks in the world and that too, at the lowest inventory.

In context of the subject under reference, it is of utmost importance to analyse the activity pattern of a commuter of sub- urban rail to understand the situations where he / she comes in proximity of the railway track which leads to a casualty in some cases. In addition to the situations described here, a number of citizens living next to rail corridor on account of ribbon development, also cross the rail lines for east-west suburb approach.

Here, an attempt is made to figure out the key thrust areas for each of the process steps followed by the commuter which needs the attention of the concerned authorities in order to figure out the potential opportunities of improvement. Table 2 gives a list of situations / causes under which a commuter is forced to cross the tracks and in turn, risk his life.

The table lists the potential causes for casualties of commuters. A close observation reveals that a majority of these are related to the circulation pattern within the railway station itself. The aspect of ribbon development along the rail corridors is another major issue.

As evident from Illustration I, the Mumbai Suburban Rail consists of more than 100 stations on all the corridors put together. Out of these, about a dozen stations serve as “Pivot Points” where the commuters criss-cross from one corridor to the other. Stations like these face a virtual stampede condition on a daily basis. The initiative of “Station Area Transport Improvement Schemes (SATIS)” is under way at some of these stations. While transport is a key element, the issues arising out of physical flow of commuters also need to be addressed. In order to address these, the Commuter Circulation plans at these stations need to be closely looked into and action plans need to be formulated for each of these. Here, a case of Thane Station is illustrated. 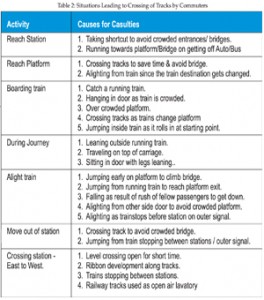 Thane railway station, connected via the Central Railway to South Mumbai and remote places like Karjat, Khopoli and Kasara (via Kalyan Jn), is a halt for all the fast trains on the Central Railway. It is also an origin (starting) and destination (ending) point of most of the local suburban trains. The suburban local trains go “upwards” (a phrase used by the railways) towards CST and “downwards” towards Karjat and Kasara. The third busiest railway station after CST and Dadar (Central), it has gained importance recently as a railway link to Navi Mumbai owing to the introduction of the Thane-Vashi/Nerul and Thane-Panvel local train line.

As described above, Thane station has gained significance since the connectivity to Navi Mumbai was established with Vashi – Panvel connection. The commuters from Ghatkopar – Mulund and Kalyan – Thane come over to Thane and change over to this new link towards Navi Mumbai. While this has given transport option to commuters, it has also resulted in a near stampede situation at the railway station almost any time of the day as the trains from Central and Vashi Harbour line roll in to Thane station at the same time. Furthermore, in the new expansion of Thane East forecourt and platforms for Vashi link, important provision of ramps at foot over bridges is totally ignored causing severe discomfort to the physically challenged commuters.